The gays, the french, the dress and Cirque Dreams 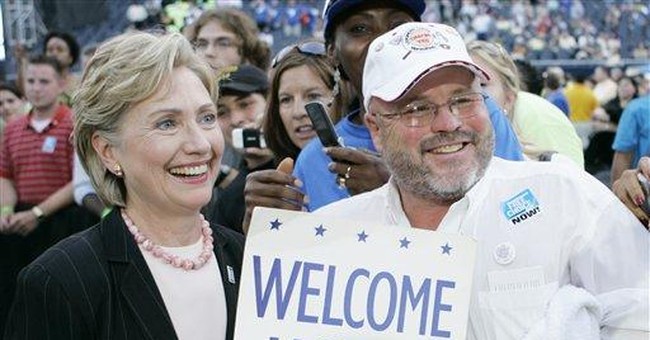 Some in Washington, including Elaine Donnelly of the Center for Military Readiness, expect Herbits to influence debate surrounding the Pentagon's "don't ask, don't tell" policy, which the New York senator opposes in favor of full acceptance of homosexuals in the military.

"Stephen Herbits' role as campaign adviser to Sen. Hillary Rodham Clinton on gay issues highlights the poor judgment of former Secretary of Defense Donald H. Rumsfeld, as well as the homosexualist agenda of Hillary Clinton," Donnelly told Inside the Beltway yesterday. "For a number of years, Secretary Rumsfeld allowed Herbits, a well-known gay activist, to play a key role in selecting high-level policy-makers for the Department of Defense."

Reached yesterday at his Florida home, Herbits downplayed his role in Clinton's campaign, telling Inside the Beltway he's one in a long list of representatives from the homosexual community who agreed to serve on her "advisory committee."

"I do not have the position of 'liaison,' as one reporter initially wrote, who was trying to get me into trouble," Herbits said. "But I have been a contributor to Clinton, and I'm trying to generate some funds for her, and I'm not embarrassed about it. She's the best of the [presidential] candidates so far. And I think she'd make a terrific president."

Since leaving the Pentagon in 2004, Herbits has been secretary-general of the World Jewish Congress, although he told us yesterday that he's in the process of stepping down: "I'm in the short-term, the process of transition,"he said.

Herbits has worked on and off in the White House, Congress and Defense Department since the late 1960s. During an earlier stint at the Pentagon, he wrote the strategy and helped implement the nation's transition from a military draft to an all-volunteer force.

President and Mrs. Bush yesterday escaped the blistering, Washington heat by jetting off to the Bush family compound in Kennebunkport, Maine, where tomorrow they will host a private lunch for French President Nicolas Sarkozy and his wife, Cecilia.

Sarkozy has cooled off himself since erupting in anger earlier this week after a pair of American news photographers got a little too close while covering his family's vacation on New Hampshire's Lake Winnipesaukee. He went so far as to jump into the photographers' boat, at which point he loudly lambasted them in French.

During the past few years, while serving as the French interior minister, Sarkozy requested that the press show "respect of his private life," particularly during a period when he acknowledged he and his wife were having "troubles."

Indeed, when it comes to the press and his private affairs, Sarkozy doesn't hesitate taking matters into his own hands. His influence made headlines last year when Paris Match Magazine Editor Alain Genestar was "forced out" ofhis job after publishing pictures of Sarkozy's wife in the company of another man. Arnaud Lagardere, who owns the million-plus circulation magazine, is a close friend of Sarkozy.

Lake Winnipesaukee, where the French president and his family have been staying in a home owned by Former Microsoft Corp. Executive Michael Appe, is only 50 miles from Kennebunkport, where the president's parents, George and Barbara, own the seaside compound Walker's Point.

White House spokesman Tony Snow says tomorrow's lunch is "not something withan agenda. The agenda is: 'Come by and let's visit.' "

"Starting bid is at $125,000, but the dress is valued at more than $300,000," Colleen Wilber of the America's Promise Alliance assures us the authentic Lady Diana Princess of Wales evening gown that goes on the auction block Sunday to benefit the Alexandria-based youth organization.

The blue chiffon gown designed by Catherine Walker was worn by PrincessDiana to the Cannes Film Festival in 1987 and to the opening of Miss Saigon in1989. The cable network WE tv purchased the dress and selected the Alliance assole beneficiary of the charity EBay auction item.

It so happens that Jared Burnett, who plays the violin in the show (all ofthe music for Cirque Dreams is original), is the brother of U.S. Capitol Police officer Jason Burnett, a member of the force's ceremonial unit.

Jared first performed in Washington at age 13, playing at the Kennedy Center with his school's orchestra ensemble.