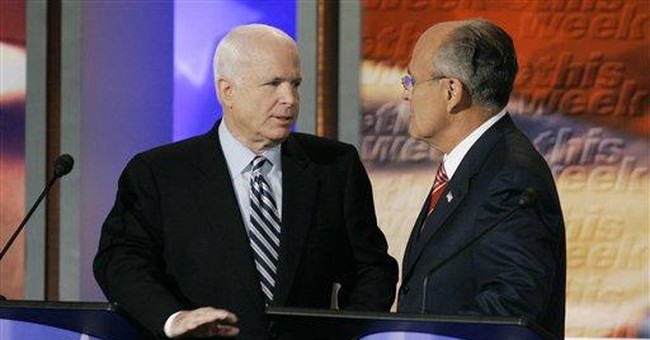 J.B. Poersch, executive director of the Democratic Senatorial Campaign Committee, got a kick out of a new Associated Press presidential poll that shows "none of the above" beating out all of the declared Republican candidates.

"How dysfunctional are Republicans right now?" he wonders.

Suddenly the 2008 race for the White House isn't premature anymore, with the Iowa Republican straw poll set for this Saturday — albeit minus a prominent pair.

"It is clear that the Ames straw poll will not be a meaningful test of the leading candidates' organizational abilities. So we have decided to forgo our participation in the event," Mr. Nelson said.

While Sen. Hillary Rodham Clinton of New York and her Democratic presidential opponent Sen. Barack Obama of Illinois continue to hammer each other on how best to tangle with the axis of evil, a top Republican candidate has declared that neither Democrat exercises sound judgment.

"They are dangerously out of touch when it comes to defending the homeland," former Massachusetts Gov. Mitt Romney says of the two Democrats, who each voted last Friday against bipartisan reform of the Foreign Intelligence Surveillance Act, which passed 60-28.

Mr. Romney considers the Patriot Act "perhaps our most effective new tool," pointing out that Americans' "most basic civil liberty is the right to be kept alive."

The key to effective homeland security, he explains, "is intelligence, finding the attackers before they attack, gathering and analyzing tips, monitoring suspects, wiretapping, surveillance, all of the tools associated with intelligence work."

This time, Jim Wrenn isn't trying to be funny when labeling "Lions for Lambs," the upcoming Robert Redford-directed movie starring Tom Cruise (he's now grown up enough to play the part of a U.S. senator) and Meryl Streep, as Hollywood's attempt to support a 2008 Democratic presidential ticket while at the same time influence public opinion on the war in Iraq and Afghanistan.

"The movie is a thinly disguised de-facto political campaign ad against supporters of the war in Iraq and Afghanistan in general and against [Republican Arizona Sen. John] McCain in particular," opines Mr. Wrenn, editor of political satire at PoliSat.com.

"I'm not a 'McCain' supporter (I'd prefer Rudy Giuliani), but I'd surely support McCain over any of the current crop seeking the Democratic nomination for 2008, each of whom is pandering to, and simpatico with, the soft-headed, professorial naivete of the American self-defeatists. Where are the John F. Kennedy 'classical liberal' Democrats?"

As for the film, it revolves around a platoon of soldiers based in Afghanistan and Sen. Jasper Irving (Mr. Cruise) leaking a major story to TV news reporter Janine Roth (Miss Streep). Mr. Redford also acts in the film, playing a college professor.

For those not familiar with Mr. Wrenn, he's a lawyer, lecturer, political author and humorist. Consider his official bio, which states he's "a proud descendant of 18th-century criminal exiles from England who swam to the Outer Banks of North Carolina when the British ship taking them to a Georgia penal colony sank in a storm near Cape Hatteras."