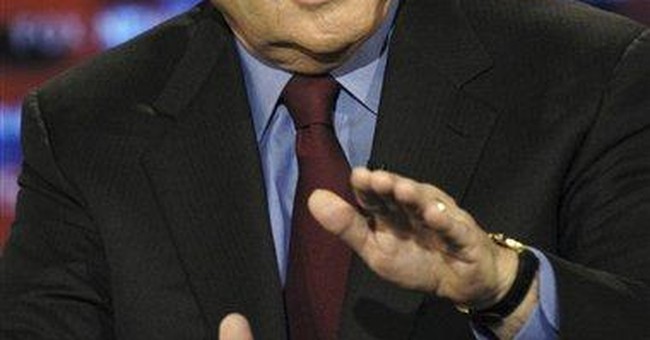 But unless he totally surprises everybody, Mr. Gingrich won't be appearing as a Republican candidate, although arguably he understands the domestic political landscape and foreign policy stage as do few in contention for the White House. Which isn't to say that Mr. Gingrich won't be making headlines today.

Just yesterday, the former Republican leader informed the Cobb County Chamber of Commerce in Georgia that the "odds are fairly significant that 'the left' will win next year."

And, in his opinion, the future Democratic president and vice president will be?

"My personal bet is that it'll be a Clinton-Obama ticket. I think they have a very high likelihood of winning," Mr. Gingrich said of Sen. Hillary Rodham Clinton of New York and Sen. Barack Obama of Illinois.

According to the Atlanta Journal-Constitution, which was on hand for Mr. Gingrich's early breakfast remarks, the former speaker pinned much of the blame for the Republican slide on the current occupant of 1600 Pennsylvania Avenue.

"The Republican challenge is, until they get past being President Bush, they have an enormous difficulty in getting people to open their minds. Six months ago in the polling numbers, Rudy Giuliani was ahead of Clinton. He is now behind. He's the strongest Republican in terms of popular vote, whether you're for him or against him."

As for Mr. Bush, Mr. Gingrich said his inability to communicate with the public about Iraq has now trickled down to the campaigns of Republican presidential candidates.

"We cannot get him to master the art that Reagan had and that Lincoln had, of talking to the American people in a form in which they are comfortable," Mr. Gingrich said of Mr. Bush. "So my first advice to the president was, 'Don't say anything anymore. Keep quiet.' "

If you think it's been slow-going on Capitol Hill since the new Democrat-controlled Congress convened in January, official Washington has really ground to a halt now that the legislative body has adjourned until Sept. 4 — its members fleeing town like spooked animals.

Whether or not you think our elected representatives deserve a long summer holiday, it so happens that their annual August recess is now required by law.

It was 36 years ago yesterday — Aug. 6, 1971 — that the Senate and House took their first "mandatory" 30-day summer recess, as required by the 1970 Legislative Reorganization Act. According to the Senate historian, existing law had provided that Congress "shall adjourn sine die not later than July 31 of each year," unless the two houses provided otherwise.

"But the last time Congress had managed to complete its work at the end of July had been in 1956," says the historian. "On even-numbered years, Congress usually managed to adjourn by early October to accommodate members running for re-election, but in odd-numbered years, it had become standard to work until December, with little time for members to plan for and enjoy family summer vacations."

So the new law has helped?

"Although August recesses since 1971 have been abbreviated during election years, the 1970 act's recess provision has been carried out faithfully during odd-numbered years."

It wasn't the Hawaiian coot, the Mississippi sandhill crane or the southwestern willow flycatcher that "reshaped the economy and tore apart the political landscape" in the name of the Endangered Species Act.

Those honors, not surprisingly, go to the northern spotted owl, which all but took the court stand in its defense.

Now, the Oregonian newspaper reports that two decades after the "wrenching drive" to save the obscure bird, including shutting down entire woodlands, "the northern spotted owl is disappearing anyway." Wait until you read why.

Fewer than 25 spotted owls remain in British Columbia, and they are vanishing inside Olympic National Park in the state of Washington as well, "where logging never disturbed them," the newspaper notes.

As for the spotted owl's knockout blow, it is "coming from a direction that scientists who drew up plans to save the owl didn't count on: nature itself. The versatile and voracious barred owl is proving far more adept at getting rid of the smaller owl than the Endangered Species Act was in saving it."

Admits David Wiens, an owl expert at Oregon State University: "It looks like we may have really underestimated the number of barred owls."

A viewpoint shared by Eric Forsman, a USDA Forest Service biologist whose pioneering research put the spotted owl on the map and who said, "I think we're going to be depressed when it's all over."