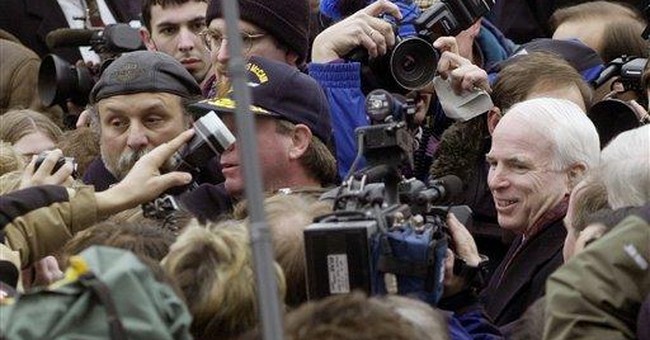 Stay tuned today to learn what Sen. John W. Warner, Virginia Republican, and Sen. Joe Lieberman, Connecticut independent, have up their respective sleeves to combat climate change — that is, if man can even tangle with Mother Nature.

The pair of politicians has called a morning press conference on Capitol Hill to reveal particulars of an agreement they've reached on climate legislation.

The agreement, which will be introduced as a bill after the August congressional recess, incorporates "new thinking" to ideas contained in other climate-change proposals.

Suffice it to say, Democrats were not happy to read that conservative publisher and broadcast mogul Rupert Murdoch's long pursuit of Dow Jones & Co. — and more specifically its prized Wall Street Journal — has finally paid off.
Democratic presidential candidate Sen. Christopher J. Dodd was among the first to respond, fearing the sale "poses a serious threat to our democracy."
Without naming Mr. Murdoch, the Connecticut senator said the "power of the media is swiftly being limited to a few controlling hands."
Then, he actually stole the "fair and balanced" slogan of the Fox News Channel, also owned by Mr. Murdoch, stating: "I am concerned that it will be very difficult for the Journal to offer fair and balanced reporting under the pressures of a giant media conglomerate."
CARTOONS | Tom Stiglich
View Cartoon

Republican presidential hopeful Sen. John McCain of Arizona is the latest 2008 candidate to announce that he will participate in the Univision Network Presidential Forum, to be held Sunday, Sept. 16, at the University of Miami in Coral Gables, Fla.
This first-of-its-kind forum will be broadcast on the Univision Network in Spanish.
It's worth noting that Univision is the fifth most-viewed network in the United States, and is actually ahead of English-language cable giants like Fox News, CNN and MSNBC. Indeed, Univision at times beats the big three networks in various ratings categories.
Four more years
Good news and bad news surrounding U.S. passports, reports the Government Accountability Office.
As for good news, the new passports developed by the State Department are "more secure than older versions," making it less likely the documents will be used fraudulently in their life span.
"State has taken a number of measures to ensure the security and quality of passports and visas, including establishing internal control standards ... and initiating new visa policies and procedures," says the GAO, although the congressional investigative arm cautions that additional measures are needed in the passport-issuance process to minimize risk.
The bad news is that the older versions of passports that have been fraudulently used in the past — "valid until 2011, of which there are more than 20 million in circulation" — remain vulnerable to alteration by such means as photo substitution.

With all the concern surrounding the increase in terrorism around the world, it so happens this has not been the bloodiest decade for the United States as far as successful "terrorist" hits on U.S. ambassadors and diplomats, albeit the ring of security around the officials is markedly improved.
State Department records reveal that five U.S. ambassadors have been killed by terrorists, the last attack nearly 30 years ago. The five victims: