Capitol By a Thread 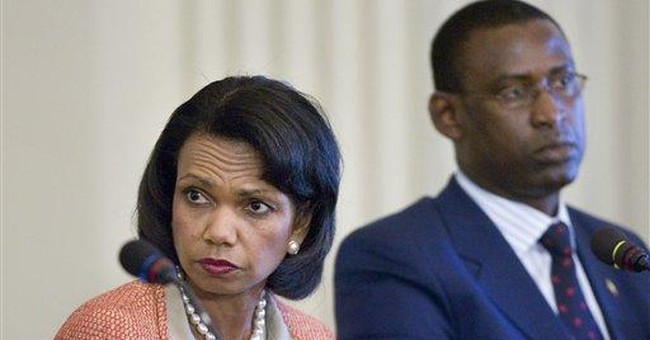 Don't be alarmed if you look up and see a person dangling from the U.S. Capitol dome.

To ensure that the "umbrella" over the Rotunda remains watertight, there is about to be a monthlong inspection and resealing of joints along the exterior shell of the dome, from the base of the Statue of Freedom downward.

The examination begins Aug. 1, according to the Office of the Architect of the Capitol; therefore, "those on the ground will see personnel supported on safety lines from the dome."

Constructed between 1855 and 1866, the cast-iron dome is considered one of the most famous man-made landmarks in America.

"Take an afternoon to clean up a park," suggests Mr. Dean. "Hold a recycling drive."

You mean there's nothing political about this event?

"And while you're there, talk to your neighbors, make new friends, and start planting the seeds for a Democratic victory in 2008."

Washington by now is usually in the throes of the "dog days of summer," although even Al Gore would agree that the customary hot and sultry weather — otherwise accentuated by all the "global warming" hype — hardly has enveloped the nation's capital, knock on wood.

The term "dog days" — the period between early July and early September — dates back hundreds of years, when Europeans first charted the bright star Sirius (the big dog) in the summer sky.

By Washington standards, "dog days" are also what Webster defines as "a period of stagnation or inactivity." In other words, Congress goes into late-summer recess, and the president retreats to the typical beach house, mountain cabin, or in the case of President Bush, dusty ranch.

We call this to your attention because of the question posed this week by a reader named Brian, who asks: "Why are there 'dog days' of summer, but no 'cat days'? This is blatant discrimination."

We checked with Space.com, Brian, and sure enough the site confirms that while "there are three constellations that represent dogs, there are no cats." But absent "cat days," there is the term "cat nights," representing several members of the cat family (foremost Leo, the lion) that ride high overhead and toward the south as darkness falls.

The site states: "Two centuries ago, some star atlases depicted a cat: Felis, the creation of an 18th-century Frenchman, Joseph Jerome Le Francais de Lalande (1732-1807). He explained his choice: 'I am very fond of cats. I will let this figure scratch on the chart.' "

We read more about the "stupendous spending" of the "first" Harold Ickes in the new book, "The Forgotten Man: A New History of the Great Depression," by Amity Shlaes, the Bloomberg columnist and visiting senior fellow at the Council on Foreign Relations.

An interior secretary for 13 years, the first Mr. Ickes was appointed by President Franklin D. Roosevelt to head the newly created Public Works Administration "on the thesis that spending would fix the economy," Miss Shlaes observes. She adds in a later chapter that Mr. Ickes and his spending agenda "had more authority than any politician."

The rest, of course, is history, although the author highlights the series of "government missteps" that transformed an "economic downtown into a catastrophic Depression."

Mr. Ickes, who died in 1952, was father to the "second" Harold Ickes, the former deputy White House chief of staff to President Clinton, who had chaired the former Arkansas governor's 1992 presidential campaign.