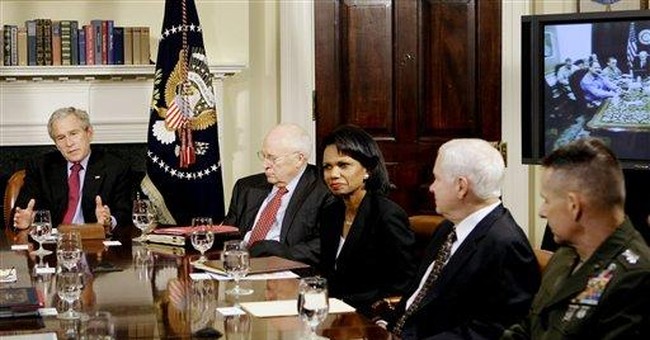 And here we thought war protester Cindy Sheehan "retired" from public view. The mother of Casey Sheehan, who was killed in action in Iraq in 2004, and founder of Gold Star Families for Peace and the Camp Casey Peace Institute, says she will march on Monday from Arlington National Cemetery to the Capitol Hill Office of Rep. John Conyers, chairman of the House Judiciary Committee, to request that he begin impeachment proceedings against President Bush, Vice President Dick Cheney or both.

If Mr. Conyers chooses not to, Mrs. Sheehan warns that she will announce her candidacy to challenge House Speaker Nancy Pelosi for election to California's 8th Congressional District.

Among the many influential guests at Washington's Army & Navy Club who turned out last night to celebrate the publication of Robert Novak's memoir, "The Prince of Darkness: 50 Years of Reporting in Washington," was Vice President Dick Cheney.

Mr. Novak commented that somebody saw him talking to Mr. Cheney and said, "Look at that — the Prince of Darkness standing next to Darth Vader."

A "dress rehearsal" for the 2010 census is under way, being conducted by the U.S. Census Bureau in advance of what will be the most expensive head count in the nation's history when adjusted for inflation: $11.3 billion. The question now is whether everybody will get counted.

"The bureau is conducting its dress rehearsal ... to test its design under censuslike conditions," confirms the General Accountability Office (GAO), which already has observed "technical problems with the handheld computing devices used during the rehearsal by field staff for address canvassing — in which the bureau verifies addresses.

"If the device does not function as expected or needed, little time will be left for the bureau to take corrective action," warns the GAO.

The future of the Republican Party hinges on the outcome of a basketball game, which currently finds the ball in the Democratic court, albeit with underdog Republicans perhaps coming on strong in the end.

"The home court advantage on issues that Republicans have enjoyed since 1994 has been lost," acknowledges Republican strategist Chris Wilson, who is president and CEO of Wilson Research Strategies. "In 2006, Republicans played on a neutral field, but in 2008 we are definitely putting on our away jerseys." Nevertheless, his firm's just-completed National Political Environment Assessment finds that the "divisive nature" of the 2008 Democratic presidential candidates this early in the campaign, particularly New York Sen. Hillary Rodham Clinton, "could help to make the general election winnable for a Republican."

Yes, Mrs. Clinton continues to hold a strong lead among Democrats, he says, and no Republican has consolidated a front-runner position. But that will change. "Given President Bush's unpopularity and the overall environment, the Democrats lead on issues and have the initial advantage in the presidential race," Mr. Wilson explains. "However, Democrats have done little to capitalize on their victories last fall and their slate of candidates are divisive, which could give Republicans the opening that they desperately need to make a long-term comeback."

Finally, he said, "the absence of a consensus candidate from either party could give partisans reason to consider a third-party candidate like [New York Mayor] Michael Bloomberg."

Qatar Airways CEO Akbar Al Baker is in Washington this week celebrating the airline's entry into the U.S. market. Service to and from Washington was started yesterday, and began in New York last month.