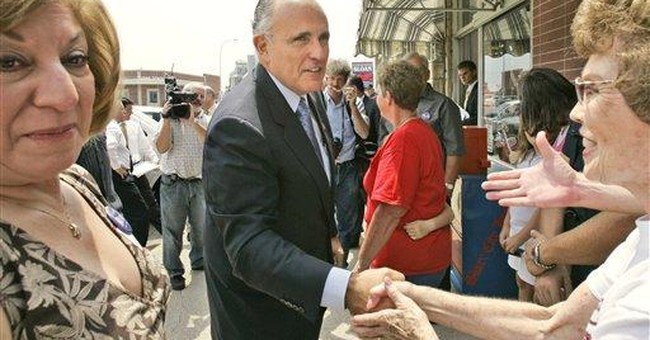 We're told 200 VIPs will be on hand this evening when journalist Fred Barnes and economic consultant Dave Smick host an Army & Navy Club reception for columnist Robert D. Novak, who is celebrating the publication of hislong-awaited memoirs "The Prince of Darkness: 50 Years Reporting in Washington."

Inside the Beltway has just returned from Charleston, S.C., where Democratic presidential candidates will arrive well in advance of the historic primary debate Monday evening at The Citadel, sponsored by CNN and YouTube. Indeed, it's the first-ever voter-generated presidential debate featuring video questions submitted through the popular Internet site YouTube and then answered by the candidates over CNN. The network's Anderson Cooper will moderate the two-hour exchange.

While a struggling Sen. John McCain has had little to cheer about in his bid for the White House, the front page of yesterday's Charleston Post and Courier reported the Arizona Republican leads all presidential candidates - Republicans and Democrats - in state fundraising during the last three months.Even the $226,000 raised by former Sen. John Edwards, North Carolina Democrat and a South Carolina native, couldn't top Mr. McCain's impressive $287,000.

South Carolina holds the first primary in the South.

That won't be your ordinary group of protesters marching into Washington next week.

The Deaf Bilingual Coalition (DBC) says it will protest outside the summer conference of the Alexander Graham Bell Association for the Deaf and Hard of Hearing, charging that the group named after the famous inventor promotes a "damaging, outdated ideology."

The Bell association needs to recognize American Sign Language, or ASL, as the "only genuine cognitive language" for the deaf, says the DBC. Founded in 1887, it says the Bell group has promoted Bell's personal belief that deaf children should not be taught the use of sign language.

"Alexander Graham Bell's ideology was to have all deaf children learn oralcommunication methods and eliminate any form of visual language," says DBC founder John F. Egbert, who is deaf. "We are letting A.G. Bell know thatphilosophy must be revised. Thousands upon thousands of deaf people's Englishlanguage and education have gone downhill since 1880. That trend must be reversed."

The protest will take place at the Arlington conference site on July 27 and 28.

The dust appears to be settling after Inside the Beltway published a rather threatening letter sent by Michael T. Eckhart, president of the American Council On Renewable Energy (ACORE), to Marlo Lewis, senior fellow at the Competitive Enterprise Institute (CEI).

"Take this warning from me, Marlo. It is my intention to destroy your career as a liar," Mr. Eckhart had written in response to an article Mr. Lewis wrote for American Spectator about the potential economic consequences of "global warming" bills introduced in the Congress.

"If you produce one more editorial against climate change, I will launch a campaign against your professional integrity. I will call you a liar and charlatan to the Harvard community, of which you and I are members. I will call you out as a man who has been bought by Corporate America. Go ahead, guy. Take me on."

Now, the ACORE president has sent Inside the Beltway an extremely lengthy response, and apology to everybody offended by his words to Mr. Lewis, which he intended as a "private communication," and merely "in the context of personal combat and jousting."

"I apologize to all in the public who were offended ... because it was not intended for public display," Mr. Eckhart writes. "In my opinion, CEI, and especially Dr. Lewis, has been presenting a false prosecution - a knowingly false prosecution - of the global-warming issue, to the detriment of society and the billions of people who will be affected by climate change."

As for reader reaction, G. Merkle writes: "An amusing but chilling note. I'm not surprised - global warming is a religion, a belief system. Rather than adebate on fact, heretics must be destroyed."

Another reader, Douglas Schulek-Miller, wrote directly to Mr. Eckhart, sending us a copy:

"Sir, having read the content of your letter to Marlo Lewis, I must thank you for your energetic reminder of why I chose Canada when I moved my familyback to North America after 14 years in Europe ...

"I recall vaguely from my youth how the spirit of [nuclear physicist] EnricoFermi was besmirched over the results of his work during World War II.Hopefully when all this has wrung all the possible monies out of it, the publicwill not have the same view of the poor environmentalists who stood at theforefront of this pop-fascism that parades itself as science."Sincerely and with best wishes, Douglas Schulek-Miller (A.A., B.A., M.B.A., Ph.D., but who's counting?)"