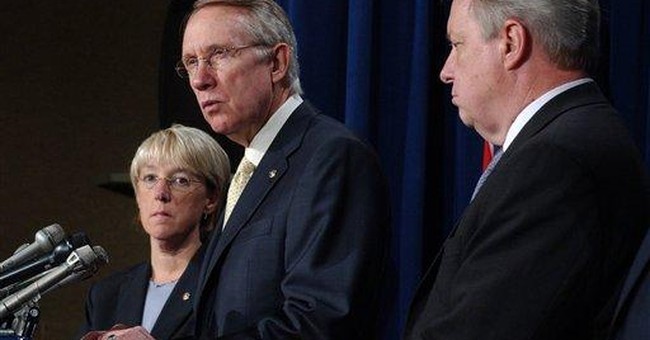 No time to digest

Hats off to Rep. Brad Sherman, California Democrat, for acknowledging that congressmen often have no idea what they're voting for or against.

Mr. Sherman recently came back to the floor of the House and clarified for the record his recent vote in opposition to H.R. 1830, which extends the Andean Trade Preference Act until February 29, 2008. Not familiar with the legislation?
Neither was the congressman.

“When an issue is complex and worthy of substantial analysis, and a bill is presented to us in a format which short-circuits that analytical process and legislative debate, it is my policy to resolve any possible doubt in the direction of a 'No' vote,” he told the body.
“Furthermore, the Ways and Means Committee marked up H.R. 1830 on the same day that the House considered the bill. Under such circumstances, members of the House had virtually no time to review the bill and I felt obliged to vote no.”

One might say an entire city is working to keep America safe from terrorists.

We're told that the Department of Homeland Security, in existence since 2003 and consisting of several federal agencies, now has a work force of 171,000-strong that is spread throughout the entire United States.

We checked, and 171,000 is the exact population of Arlington, Va., and Huntington Beach, Calif.

“As per our summer schedule, we are notifying you when new articles are now up on the 'To The Point' home page,” reads a news alert sent to Inside the Beltway, drawing attention to the latest release: “The Many Ways to Bribe Politicians.”
OK, our curiosity is piqued.

But upon reading the article by Dagny D'Anconia, best known for penning the “Political Nasdaq” column, this new degree of bribing has nothing to do with politicians like former California Rep. Randy “Duke” Cunningham, a Republican now serving eight years in prison after pleading guilty to accepting at least $2.4 million in bribes.

Nor does it refer to current lawmakers like Louisiana Rep. William Jefferson, the Democrat whose freezer was found to contain $90,000 in alleged bribe-related cash (his new nickname, if you haven't heard, is Congressman “Cold Cash” Jefferson).

Rather, this new form of bribery pertains to the incredible power of the spoken word, and how it can effectively sway public opinion.
The very first example cited is Senate Majority Leader Harry Reid of Nevada, who spouted of the war in Iraq: “I believe myself that . . . this war is lost and the surge is not accomplishing anything as indicated by the extreme violence in Iraq yesterday.”

“We call it an honest difference of opinion between fellow Americans,” explains Mr. D'Anconia. “After all, if [Mr. Reid] were a traitor, wouldn't we have found suitcases of money, and bank accounts with checks from Arab sources? . . .

What you need to know is that it really is very easy to secretly bribe public officials, and all this hoopla about effective campaign finance reform is just nonsensical window dressing.”

"When it comes to family fun, it must be Maine.” Such is the slogan of the Maine Office of Tourism.

But don't tell that to Mike Hein, administrator of the Christian Civic League of Maine, who this week is complaining that thousands of taxpayer dollars have been directed to a “perverse” film festival in his state.

The 10th Annual Maine International Film Festival kicked off last weekend, with shows running through July 22. Among them: The Ten, which “uses the famous set of stone-carved commandments for purposes Moses never imagined . . . [and includes] sex with a ventriloquist's dummy;” Four Minutes, which “concerns two women” and their shared love; and Murmur of Youth, involving a “daring lesbian romance.”

Perhaps it wouldn't be so bad, Mr. Hein says, except that Maine's festival, hosted by the city of Waterville, also courts children for “Fireflies” films that are screened at the same location “as the sexually explicit adult films.”