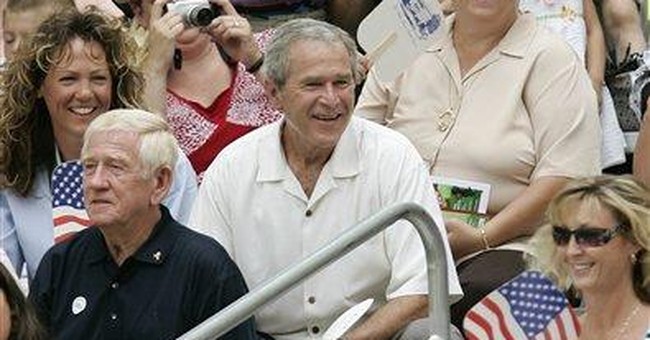 One caller, Inside the Beltway is told, awakened Sen. Jon Kyl, Arizona Republican, from a sound sleep to complain about the bill.

"Not only jammin' up phone lines, but getting senators up in their jammies," says our Capitol Hill source.

The White House hasn't forgotten the uproar in 2005 when President Bush wasn't told of a major terrorism scare in Washington — one that scrambled military fighter jets and sent first lady Laura Bush, former first lady Nancy Reagan and Vice President Dick Cheney scrambling from the White House to secure bunkers — until the end of his Maryland bike ride, or 40 minutes after the "all clear" was sounded.

Yesterday, after a similar presidential bike trek through the Maine woods, White House press secretary Tony Snow assured reporters that "the president was briefed before and after — before, during and after — the bike ride on ongoing [terrorism] developments in London, and continues to be briefed during the day, regardless of where he may be."

The group "Think Condi" won't give up, even though Secretary of State Condoleezza Rice says the last place she intends to be in 2008 is on the presidential ballot.

The Four Seasons hotel in Georgetown lived up to its reputation yesterday as home of the Sunday power brunch.

In one corner, we spotted Alabama Sen. Richard C. Shelby and his family enjoying the popular buffet, while huddled in deep conversation in another corner were PBS (and presidential debate) host Tavis Smiley and Washington pollster (and post-debate focus group moderator) Frank Luntz.

Like some fellow native Washingtonians, about the only time this columnist pays due respect to our city's wealth of museums, monuments and memorials is when out-of-town relatives and friends arrive for a visit.

Thus, the weekend began with a trip to the National Archives, to check on the condition of the U.S. Constitution and Declaration of Independence. It's been a tough couple of years for the country, but John Hancock's flamboyant signature is as bold as ever.

From there, my friend and I climbed Capitol Hill and stood beneath the symbolic and physical heart of Washington — the 180-foot-tall U.S. Capitol Rotunda (fortunately, the Capitol's dome wasn't completed until 1818, four years after the British came bearing torches). We also stopped by Arizona Sen. John McCain's office, but unfortunately, he was out campaigning for president.

For lunch, we crossed the Potomac River into Old Town Alexandria, taking in the well-preserved haunts of George Washington and what few tributes remain to the politically incorrect Confederate Gen. Robert E. Lee, who grew up in the port town. From there, we slipped up and down the marble steps of Arlington National Cemetery, although the steady rainfall could not dampen the Eternal Flame at John F. Kennedy's grave site, or halt "the Old Guard" (members of the 3rd United States Infantry) from their 24-hour, 365-day vigil over the Tomb of the Unknowns.

Speaking of Lee, his "Arlington House" home for 30 years, which sits atop the cemetery's highest grassy knoll, remains open to visitors, but period furniture is temporarily removed for restoration.

Next, we crossed the Memorial Bridge to the Lincoln Memorial, standing in the same spot where on Aug. 28, 1963, Martin Luther King declared "I Have a Dream" — and yes, my Las Vegas friend reminded me, where Forrest Gump saved the civil rights leader from the fangs of vicious police dogs.

It was a short walk from there to the Vietnam Veterans Memorial — "a place of healing for those affected by one of the most divisive wars in our nation's history." Drops of rain dripped down "the Wall" like tears, soaking a cigar that a loved one left for one of the 58,249 fallen soldiers whose names are etched in the black granite. Another visitor placed reading glasses atop a Bible.

I couldn't help but think how much better a nation this would be if every American had the opportunity to spend a day like mine this past weekend — rereading America's founding principles, recalling the nation's strides and struggles, remembering that freedom is not free.

As for a souvenir, Laura Diachenko, a public-affairs specialist at the National Archives, kindly provided this photograph, one of many currently on display in a presidential exhibition at the Archives. Most readers will recognize the famous father-and-son pair.

The National Archives has many photos on display in a presidential exhibition, including this one from 1946 of a pair of Bushes in matching Yale sweaters.