Take Me Out to the Ballgame 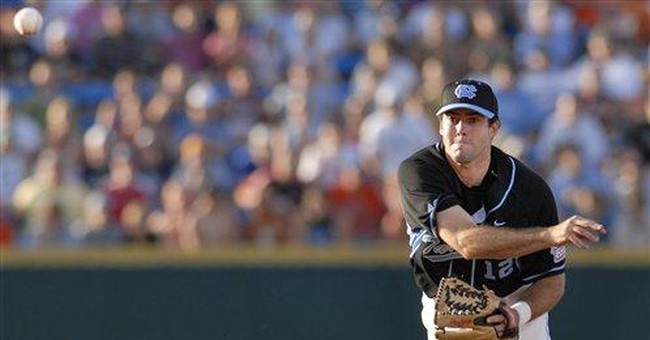 It's not just Mexicans sneaking across the Texas line into the United States.In his new book, "From Power to Purpose," Sen. Sam Brownback, Kansas Republican and 2008 presidential candidate, writes about a visit he and Homeland Security Secretary Michael Chertoff made to a U.S. detention facility in El Paso, Texas.

"As I looked around at the people who were incarcerated there, I saw Asians, Europeans, Latinos and Africans," says Mr. Brownback. "I asked the warden how many different countries were represented in the facility. He told me there were people from 49 different countries."

That was Minnesota Gov. Tim Pawlenty, who given his impressive budget-balancing act is now on the "A" list of potential Republican vice presidential candidates, posing for a friendly photo with actress Goldie Hawn, a longtime supporter of Democrats, at Bill and Tani Austin's Starkey Hearing Foundation awards gala.

Mr. Pawlenty supports Arizona Sen. John McCain for president, although other Republican candidates are eyeing him as a formidable running mate. After all, upon assuming a $4.5 billion budget deficit when becoming governor in 2002, he set out to eliminate the deficit without raising taxes. Not only was the budget balanced by 2005, it transformed into a $2.2 billion surplus at the end of 2006.The hearing foundation gala, which raised $4.5 million to help fit free hearing aids for poor children around the world, honored Miss Hawn, Los Angeles Dodgers Hall of Famer Tommy Lasorda, former Surgeon General C. Everett Koop, and philanthropists Al and Cathy Annexstad. Master of ceremonies was NBC "Tonight Show" host Jay Leno.

Democrats and Republicans took to the field at RFK Stadium last night for the annual congressional baseball game, which began in 1909 as a "casual game among colleagues."

That would change. Democrats beat Republicans that first year 26-16, and by 1913 the Republican Party was getting walloped by a score of 29-4. (Imagine what the score might have been had the game not been called because of rain in the fourth inning.)

The most lopsided contest was in 1928, when Republicans were crushed 36-4. Finally, in 1932, Republicans got to gloat, winning 19-5. Albeit, that wasn't enough runs as far as the GOP batters were concerned.

"The official score of this game is disputed," explains the House Clerk's office. "Umpire Tunney ruled a high fly ball hit in the last inning by Republicans an out intead of a home run."