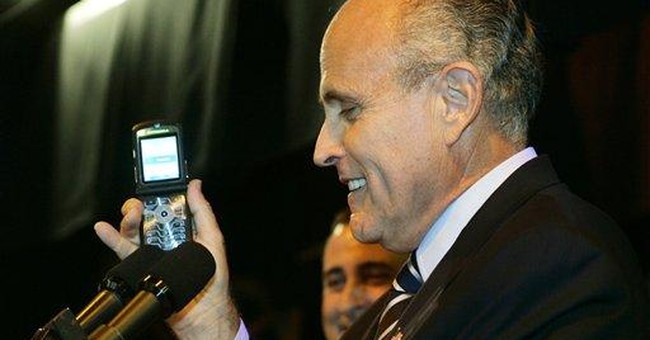 The Democratic National Committee (DNC) is so intent on reaching every American voter in advance of the 2008 presidential election that even DNC Chairman Howard Dean is on the DNC's mailing list.

"Dear Howard," reads a letter sent to the DNC chairman last week by DNC executive director Tom McMahon. "Remember the Republican culture of corruption? The revolving door of Republican politicians moving in and out of top political offices and Washington D.C. lobbying firms?

A sure sign that it's summer is when opening our invitation to what is now political pollster Frank Luntz's Sixth Annual Baseball All Star Party at his sprawling Virginia estate, dubbed "The Smithsonian McLean branch" because of its vast collection of history, politics and sports memorabilia.

Under Mr. Luntz's expansive roof one finds perhaps the most valuable private newspaper collection in Washington, a ticket from every day of Bill Clinton's impeachment trial, the Playboy interview with Jimmy Carter, and the original "Addams Family" electric chair.

Items to debut this year include a blackjack table signed by every actor who played James Bond, a personal letter written by Winston Churchill, a 17th century political dismissal from Britain's Oliver Cromwell, a handwritten note from a John F. Kennedy suitor (seriously), and the infamous "Kerry picks Gephardt" newspaper banner, compliments of the New York Post.

Each year, Mr. Luntz entices guests (as if the above paraphernalia isn't enough) with a top 10 list of reasons to attend his party. Our favorites this year: Rosie O'Donnell and Donald Trump JELLO wrestling, a Nancy Pelosi kissing booth with "no-line" guarantee, and Colorado congressman and 2008 Republican presidential candidate Tom Tancredo rebuilding the pool fence to keep out illegal attendees.

That will be Florida Republican Rep. Gus Bilirakis being feted this evening at a Greek reception-of-sorts at Bullfeathers on Capitol Hill, with several members of Washington's Greek business community expected to be on hand.

Carrie Lukas, Washington-based author of "The Politically Incorrect Guide to Women, Sex and Feminism," was keynote speaker when the college-based Network of Enlightened Women (NeW) held its second annual national conference on Saturday.

"NeW has the potential to do one of the most important things for the conservative movement, which is to change the climate on college campuses," said Miss Lukas, a senior fellow at the Goldwater Institute and vice president for policy and economics for the Independent Women's Forum.

"NeW is first and foremost a book club, so having an author speak was particularly appropriate," NeW Founder Karin Agness, a graduate of the University of Virginia (UVA), told Inside the Beltway. "A few of our chapters read her book this past semester."

Three chapter presidents spoke at the conference, including Christa Byker of UVA, Sara Byrd of Mary Washington University, and Catherine Smith of Arizona State University (ASU). The chapter of the year award was presented by NeW to ASU for its success in "standing up for conservative principles and encouraging students to challenge the liberal campus atmosphere."

The chapter during the past year had read "What Our Mothers Didn't Tell Us: Why Happiness Eludes the Modern Woman," by Danielle Crittenden, and also challenged Eve Ensler's "The Vagina Monologues" by distributing handouts.