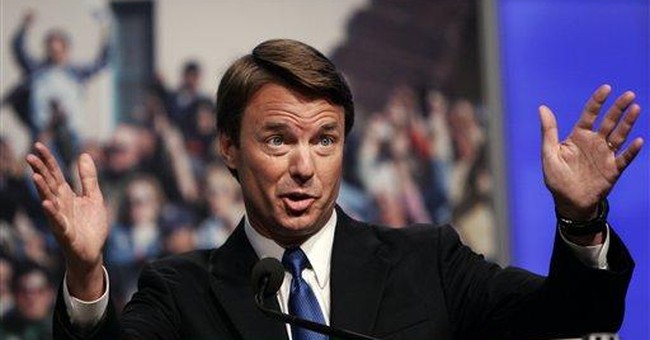 Just returning from Hollywood is James L. Swanson, Washington author of "Manhunt: The 12-Day Chase for Lincoln's Killer," who tells Inside the Beltway an HBO movie is in the works based on his best-selling book.

"It will be a mini-series, probably a minimum of two nights, and two hours a night," says Mr. Swanson, who adds he can't wait now to learn who will play the role of Abraham Lincoln's assassin.

Other possible actors he mentions for the part are Orlando Bloom and Edward Norton. "There is a small group who could play the role," he says.

Meanwhile, Mr. Swanson says he was "thrilled" to be awarded the Edgar Allan Poe Award for "Manhunt," presented in New York on April 26.

"Coincidentally," says the author who happened to be born on Lincoln's birthday, "it was presented on the anniversary of the death of John Wilkes Booth."

The John Edwards campaign is taking a swipe at how much money it can costvoters to meet 2008 presidential candidate Sen. Hillary Rodham Clinton.

"You shouldn't need to fork over $2,300 to meet a presidential candidate," Jonathan Prince of the Edwards campaign said prior to his candidate's $15-per-person fundraiser Tuesday night at MCCXXII in Dupont Circle. "All you need tojoin us is ... enough pocket change for a bus ticket."

Yesterday, Inside the Beltway wrote about one cocktail fundraiser for Mrs. Clinton tomorrow evening, where invitees are requested to fork over $2,300 each if they want to have their picture taken with the New York senator.

Show me the money

Speaking of campaign cash, Inside the Beltway called on the Federal Election Commission yesterday for the latest tally of contributions to candidates this far in the 2008 presidential campaign.

As of the last FEC filing period, a total of $157 million-plus has been raised by all candidates combined: $95 million going to Democrats, $62 million to Republicans.

Every other candidate is well below $10 million, however, amounts surely have isen significantly and will be reported on July 15, the next FEC campaign-finance filing deadline covering the period through June 30, when severalpresidential debates took place.

"Senator Kennedy would like to say thank you in person," reads a memo sent yesterday afternoon to selected Senate staffers, advising that Massachusetts Sen. Edward M. Kennedy "would like to invite you all - and your bosses - to asmall reception so he can personally thank you for all your hard work on thehigher education bills.

Paying at the pumps

Think you pay a lot for gasoline?

In parts of Alaska where the oil flows, residents are currently paying more than $8 a gallon. And that makes Rep. Don Young, Alaska Republican, an unhappy driver.

"Not only is Alaska home to North America's largest producing oil field, it is also home to more clean coal than the entire lower 48 states," says Mr. Young. "Unfortunately, there has been a decades-long campaign to deny America and Alaskans the benefits of this domestic energy."

Touched by an angle

There is only one way it can go
When the Clintons are destined for woe
And they don't have the base
For a two-person race:
Michael Bloomberg must play Ross Perot.