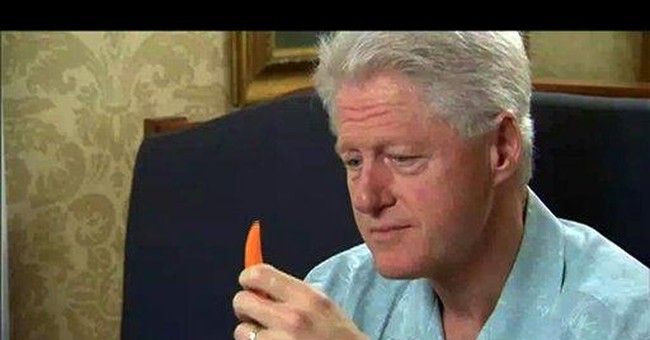 "How many tickets shall I put you down for?" jokes syndicated columnist and Fox News analyst Cal Thomas, who forwards an invitation for cocktails this Friday evening with 2008 Democratic presidential candidate Sen. Hillary Rodham Clinton.

"I already have two pictures with Hillary,' he says.

We had better pass, too. After all, cocktails will be served in Los Angeles. Then there's the cost of posing with Mrs. Clinton: $2,300. (We'll wait until we see her again at Cafe Milano and snap a picture with a cell phone.)

The fundraiser will be held at the Hollywood home of German-born film director Roland Emmerich, made famous by the blockbuster movie "Independence Day".

"This is your chance to hear from Senator Clinton herself and learn why I think she's the best candidate for president," writes party co-host Sen. Sheila James Kuehl, who touts herself as "the first openly gay or lesbian person to be elected to the California Legislature."

The Democratic National Committee isn't waiting for former Tennessee Sen. Fred Thompson to declare his candidacy for president before blasting his other "career" that doesn't involve being an actor.

"For years, acting wasn't the 'Law & Order' star's profession — it was a hobby. In the real world, Thompson has made a fortune in a decades-long career as a Washington lobbyist," the DNC's executive director, Tom McMahon, said yesterday.

Moments before, a Rasmussen poll was released showing Mr. Thompson ahead of all the other Republican presidential contenders for the first time.

Mr. McMahon went so far as to equate Mr. Thompson's lobbying efforts to "the Republican culture of corruption," a "revolving door of Republican politicians moving in and out of top political offices and Washington D.C. lobbying firms."

He even drew attention to the former senator's recent offer to host a fundraiser for I. Lewis "Scooter" Libby Jr.'s legal-defense fund. The DNC official said the gesture reflected Mr. Thompson's "role as the ultimate Washington insider."

At least one politician is angry at Mexico for booing a lady — namely, Miss USA Rachel Smith, booed while on stage at last month's Miss Universe pageant in Mexico City.

"In America, we seem to do things a little bit different," Rep. Ted Poe, Texas Republican and former felony court judge, said this week. "We cheer for our country. We wave our flag. We invest in our country, and we respect our neighbors ... And where I come from, we never boo a lady."

News organizations were quick to report that the booing wasn't personal, rather reflected Mexico's feelings toward the U.S. at a time when Congress fiercely debates illegal immigration. As far as Mr. Poe is concerned, it reflects why President Bush is wrong to propose amnesty for illegal aliens, whose numbers are estimated at between 12 million and 20 million.

"A pathway to citizenship ... only works if people really want to become Americans. If you want to be an American, then there are some responsibilities to that. You just don't get to take all you can and leave when you are done," he said.

"Mexico and other countries promote illegal immigration to the United States with one understanding: You send your money back home to Mexico. And America is not home. Billions [of dollars] headed south last year to Mexico alone.

"So when the United States gets booed, people that don't understand this are a bit taken aback," Mr. Poe said. "Most people don't bite the hands that feed them, especially when you have them eating out of your hand."

Normally when U.S. presidents leave office, the intrigue goes with them. They simply return home — or else settle down in a retirement community, playing golf and giving the occasional speech.

Not Bill Clinton. He has as many admirers and followers today as he ever did. And now, Reps. Carolyn B. Maloney and Nita M. Lowey, both New York Democrats, have introduced a resolution recognizing Mr. Clinton's 61st birthday — which won't be celebrated until Aug. 19.

Why a congressional resolution?

"President Clinton has had a long and distinguished career in public service including serving as governor of Arkansas and president of the United States," Mrs. Maloney reminds us, citing his "unprecedented economic expansion," "creation of 22 million jobs," and "bringing peace to Northern Ireland."