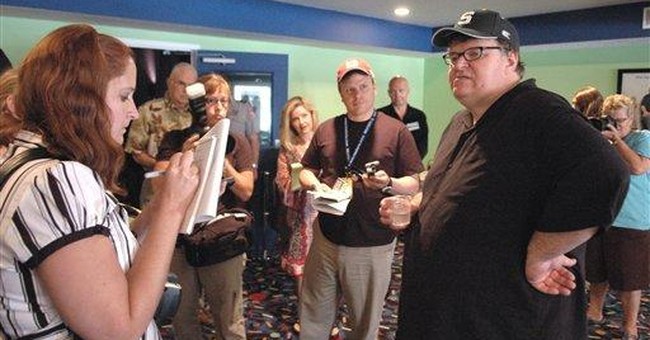 Or so the Campaign for America's Future was happy to report yesterday, as its three-day "Take Back America" conference got under way at the Washington Hilton, featuring 3,000 "progressive activists, thinkers, bloggers and elected officials."

These new-age Democrats aim to "chart a course for the nation" by proposing "bold solutions to the big challenges."

Lighter moments will be compliments of actor Jason Alexander, who played George Costanza on "Seinfeld"; and liberal activist and filmmaker Michael Moore, who comes to Washington amid new charges of liberal bias. While providing a sneak preview of his new film, "Sicko," over the weekend, Mr. Moore was asked about the film "Manufacturing Dissent," which accuses him of being "dishonest" in his political documentaries.

"Anybody who says that is a [expletive] liar," Mr. Moore told the Associated Press.

That was 2008 Democratic presidential candidate Rep. Dennis J. Kucinich of Ohio honoring the late columnist, author and political commentator Molly Ivins for her "love of America."

"She had the guts to speak her mind, no matter the opposition," Mr. Kucinich said in a House speech.

It was Miss Ivins, who died of breast cancer in January, who handed President Bush the nickname "Shrub." And although she labeled former President Clinton "weaker than bus-station chili," she felt him unfairly abused by the press.

An actual volume of President Reagan's handwritten diary has been flown to Washington and is on display in the lobby of the National Archives. It is under a glass case and opened to the day of his famous visit to Normandy on the 40th anniversary of D-Day.

That was Cuban-born and UCLA-educated filmmaker Vivien Lesnik Weisman — and her new documentary, "The Man of Two Havanas" — being feted last night at a private dinner hosted by Washington publicist Janet Donovan at Teatro Goldoni.

The much-talked-about film tracks the participation of Miss Weisman's father, Max Lesnik, a onetime friend of Fidel Castro, in the revolution to overthrow dictator Fulgencio Batista, Mr. Lesnik's later exile to America after the revolution took a Marxist turn, and his return to Cuba to work against the U.S. economic embargo.

A private screening of the documentary will be held tomorrow evening at Landmark's E Street Cinema, co-hosted by Wayne Smith, director of the Center for International Policy's Cuba Program.

The Pentagon is high-tech with its global positioning system munitions, advanced laser-guided bombs and other "smart weapons," but it remains challenged when it comes to its military ranks safely voting in national elections with secure electronic absentee ballots.

In 2004, Congress required the Department of Defense (DOD) to develop an Internet-based absentee voting project for military personnel, and instructed the Election Assistance Commission (EAC), which reviews election procedures, to develop guidelines for the project.

Last year, Congress gave the Pentagon until May 15, 2007 — well before the November 2008 presidential elections — to report on its success in developing the electronic voting system. Bottom line: no success.

"Without such plans, DOD is not in a position to address congressional expectations to establish secure and private electronic and Internet-based voting initiatives," the Government Accountability Office (GAO) says in a new report, blaming the EAC for having "not developed the Internet absentee voting guidelines for DOD's use, and thus DOD has not proceeded with its ... project."

In the meantime, the military's $1.1 million 2006 "Integrated Voting Alternative Site," which enables military voters to request ballots using one tool — mail, fax or unsecured e-mail — "raises concerns," the GAO adds, and "could expose voters to 'identity theft' if they transmit personal data."