Indictments, Fire Ants, and Other Annoyances 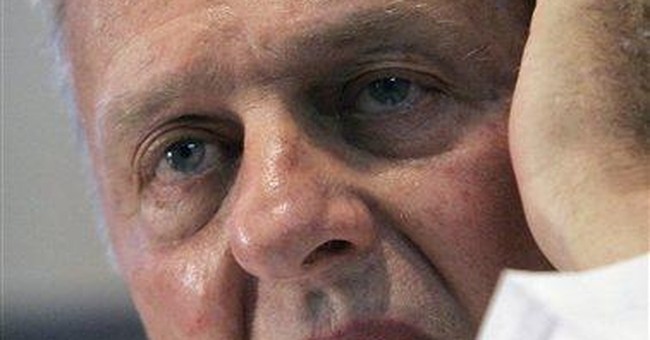 The National Archives isn't saying much -- not yet at least -- about a newly discovered Abraham Lincoln document that is being hailed by Archivist of the United States Allen Weinstein as a "significant find."

We can only surmise that the document pertains to the Civil War, as Mr.Weinstein will be joined at Thursday's unveiling by Archivist Trevor Plante, aspecialist in Civil War materials.

News photographers, meanwhile, are being told in advance that no artificiallight can be used on the document, which speaks of its age and historic significance. Otherwise, all that an Archives spokeswoman confirmed yesterday is "the whole surprise element."

The federal deficit is enormous, so huge it's practically indescribable.So, when filing yesterday's update, "The Nation's Long-Term Fiscal Outlook,"the Government Accountability Office (GAO) simply wrote "that we are on an unsustainable fiscal path."

"By definition, what is unsustainable will not be sustained. The question is how and when our current imprudent and unsustainable path will end."

Another blow for New Orleans, as yesterday's indictment of Democratic Rep. William J. Jefferson of Louisiana on charges of racketeering, soliciting bribes and money laundering means that the Crescent City will likely lose a strong ally while rebuilding from Hurricane Katrina.

In the past few months alone, more than a handful of hurricane-related bills and provisions, several sponsored, co-sponsored and written by Mr.Jefferson, were approved by Congress, including $4.3 billion for FEMA disaster-recovery grants; $25 million for Small Business Administration disaster loans; $30 million for education recruitment assistance; and $1.3 billion for east and west bank levee protection and coastal restoration.

Come to think of it, Mr. Jefferson traveled last year to The Hague, where he met with Dutch officials and studied levee protection in the Netherlands.

NASA, the Coast Guard, Air Force, Navy and Marine Corps all took part in an expansive search-and-rescue exercise in recent days to retrieve a spaceshuttle crew in the event of launch failure.

NASA reports that such a catastrophe could prompt a shuttle crew to bail outover the Atlantic Ocean near Florida's Kennedy Space Center. Four real-lifeastronauts took part in the recent exercise, floating in small rafts as aircraft, ships and helicopters hunted for them in the open water.

Meanwhile, all systems are go for this Friday's 7:38 p.m. launch of theSpace Shuttle Atlantis, which will be NASA's 21st mission to the International Space Station.

Science Daily warns that the horrid, highly agressive ants, which have raised havoc in Florida and Texas since first arriving in the United States by ship in the 1930s, are difficult to distinguish from other ant species, but "they respond quickly by rushing forward and grasping onto the enemy with arbedmandibles."

If you're lucky. Fire ants, the publication notes, "caught the public'sattention in 2006 when a 30-year-old landscape worker in Virginia Beach died after a fire-ant attack."