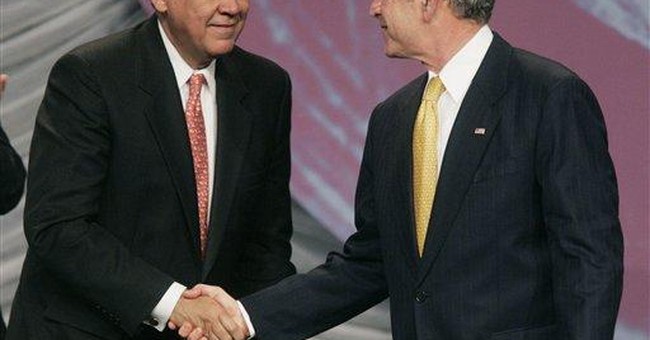 Cliff Stoddard, counsel for the Senate permanent subcommittee on investigations, was intrigued to learn this week that top executives of the four major record companies are unwilling to crack down on explicit music lyrics, particularly by rap artists.

"I found it interesting," Mr. Stoddard told Inside the Beltway yesterday, "because last week, I was approached by a young man who identified himself as an 'up-and-coming' rap artist. He had made CDs with labels and music and told me that he was promoting his rap, which contained no obscenities or degrading references to women."

"I told him that I would support his fledgling career and paid him for one of his CDs. Not a rap fan myself, I still placed the CD in my car's CD player to listen to it as I drove away. The CD was completely blank. I guess that rap without obscenities or the degradation of women does not really exist after all."

An enthusiastic Maria Cino, president and CEO of the 2008 Republican National Convention, rushed back "home" from Minneapolis to headline the annual membership reception of the Commonwealth Republican Women's Club (CRWC), held at the Alexandria Lyceum.

Miss Cino, a longtime Republican Party strategist who until recently was acting secretary of Transportation, told the packed audience that she had always claimed Buffalo, N.Y., as her home until a recent visit by her mother, who pointed out that she has now spent half of her life in the Washington area, and it was time she called it "home."

TheGOP convention chairman said she was 12 years old when she got her start in politics, knocking on doorsin Buffalo in support of Republican candidates. Not surprisingly, she grew up to be deputy chairman and chief operating officer of the Republican National Committee, national political director for George W. Bush's 2000 presidential campaign, executive director of the National Republican Congressional Committee, and chief of staff to then-New York Rep. Bill Paxon.

When asked how to break through the Democratic stronghold in Alexandria, where there are currently no elected Republicans, Miss Cino encouraged CRWC's members, led by president Leslie Anderson, to either keep knocking on doors, or else get as many Republican friends as possible to move to thecity.

Miss Cino said she personally tried that strategy by getting Republican operative Mary Matalin to move next door to her in Old Town, which almost worked, until her Democratic husband, James Carville, came along, too.

Speaking of James Carville, we were happy to see Illinois Rep. Rahm Emanuel, chairman of the Democratic Congressional Campaign Committee (DCCC), show up for a recent party at the Democratic operative's town house in Old Town.

After all, the very first pages of the just-released book, "The Thumpin': How Rahm Emanuel and the Democrats Learned to Be Ruthless and Ended the Republican Revolution" -- by Naftali Bendavid, deputy bureau chief of the Chicago Tribune -- reveal how Mr. Carville and Mr. Emanuel were at each other's throats during the final stages of the 2006 midterm elections.

Longtime friends, the two were"frequently fighting," Mr. Bendavid writes. "Carville would tell Emanuel that the Democrats would fail -- 'It doesn't look so good out there,' he'd say."

"Finally, Emanuel's entire body tensed and he exploded at Carville, 'James -- No, James, you listen. Can you listen for one [expletive] minute?' " Mr. Emanuel shouted. "Undaunted, Carville kept interrupting."

Mr. Bendavid, who had exclusive access to Mr. Emanuel for more than a year leading up the November 2006 elections, says other critics, including Democratic National Committee Chairman Howard Dean, were "telling Emanuel he had to take their advice or the Democrats would blow their best chance in a generation."

But the feisty congressman, a former Clinton White House aide who, during the campaigning "was unable to get through a single sentence without several obscenities," ignored friends and foes alike. And come Election Day, he delivered Democrats one of their greatest election victories in history -- or what President Bush called "a thumpin.' "