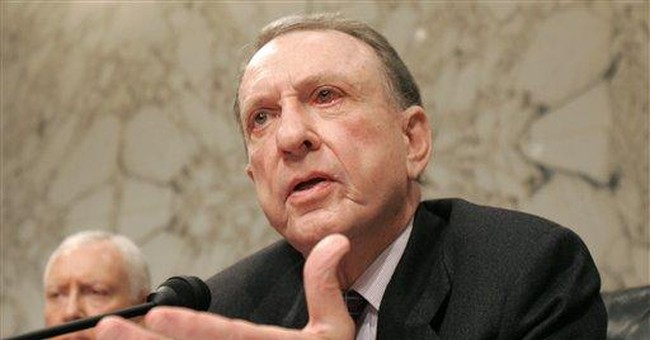 "The vice president won't be strolling any Baghdad markets."

Imagine the pride a young girl feels when looking down from the gallery above the U.S. Senate floor as her grandfather deliberates on the war in Iraq.

Imagine the grandfather — in this case, Republican Sen. Arlen Specter of Pennsylvania — pausing during the proceedings to note that his granddaughter, Silvi Specter, and 58 of her seventh-grade classmates from Robert Saligman Middle School outside Philadelphia, were seated in the gallery observing the U.S. Congress in session.

Then imagine Mr. Specter spontaneously weaving his position on continued funding for the war in Iraq into a lesson for the visiting students about the legislative process.

"This is basic civics, but it is good to repeat it," Mr. Specter noted, glancing toward the gallery. He said there are 100 senators and 435 congressmen, and he explained how bills they pass go to the president for his signature, although that's not always the case.

"We have a fascinating part of the legislative process right now with the issue of the funding of the Iraq war," the senator observed. "We have a unique constitutional confrontation. I think it is not an overstatement to say it is of historic proportion — perhaps the most dramatic constitutional confrontation between the Article I power of the Congress to appropriate, commonly known as the power of the purse, and the authority of the president under his power as commander in chief.

"The president is insisting on carrying out the program he has in mind with the addition of troops, a surge in Iraq, to try to restore order to that country. I believe had we known Saddam Hussein did not have weapons of mass destruction, we would not have gone into Iraq to start with, but once there, we do not want to leave it in a state of turmoil. So we are trying to work our way through the problems as best we can."

"We know we have a 10-year window to address global climate change before it's too late."

"Where's the global warming? It's freezing in here."

— Music legend Bob Dylan, asked during an interview with Rolling Stone magazine whether he is concerned about global warming.

Whistleblowing "Deep Throats" are healthy for America. But more than 30 years after Watergate, "the press cannot make that assurance [of confidentiality] to sources, and we face the real danger that there may never be another Deep Throat."

So warns Rep. Mike Pence, Indiana Republican, who calls attention to jailed reporters like Judith Miller and other members of the Fourth Estate "who have been subpoenaed for taking a stand for the First Amendment and refusing to reveal confidential sources."

Mr. Pence, along with members of both parties in both houses, has just introduced the Free Flow of Information Act of 2007 to further protect free speech and a free press.

What do Vice President Dick Cheney and American Idol judge Simon Cowell have in common, besides acerbic personalities?

Both are included in Fox News anchor Brian Kilmeade's new book, "It's How You Play the Game: The Powerful Sports Moments that Taught Lasting Values to America's Finest."

Instead of doing the usual book tour, Mr. Kilmeade, a sportscaster before becoming co-host of the popular morning show "Fox & Friends," is taking a temporary leave from the hubbub of New York City to meet and greet members of the U.S. military at bases across the country. This week, he's visiting Fort Belvoir in Virginia and Andrews Air Force Base in Maryland, both outside Washington.