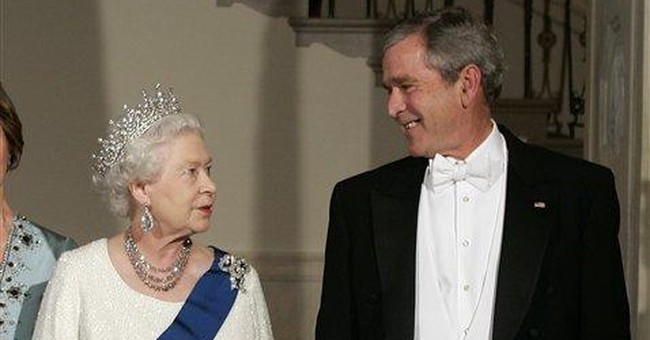 Or so replied White House press secretary Tony Snow , when it was suggested to him yesterday that President Bush's drop in the polls to 28 percent has to do with the continuing war in Iraq.

According to President Bush , the number of U.S. presidents Britain's Queen Elizabeth II , 81, has "dined" with in her lifetime: 10

Which American wine was fitting to serve Her Majesty Queen Elizabeth II and His Royal Highness Prince Philip , Duke of Edinburgh, at yesterday's White House welcome luncheon hosted by President and Mrs. Bush?

We checked, and the going rate for an identical bottle of the 2004 DuMOL "Isobel" at Schneider's of Capitol Hill -- the liquor store's motto, "We feel that wine is life and life is wine" -- is $70.00.

U.S. airports face potential safety challenges with the arrival of the much-hyped, double-decker Airbus A380, nicknamed "Superjumbo" and touted as the largest passenger jet in the world.

The Government Accountability Office (GAO) says in a new report we obtained that most U.S. airports will need to modify their infrastructure or at least impose operating restrictions, including "required" increased separation between the A380 and other aircraft during landings and takeoffs because of the strong air turbulence created by the A380's wake.

"The A380 also poses challenges for fire and rescue officials due to its larger size, upper deck, fuel capacity and the number of passengers," says the GAO, which conducted site visits to 18 U.S. airports preparing to welcome the A380. (Officials at Washington Dulles International Airport say they will have to modify loading ramps at the gates to accommodate the big bird; otherwise, they see no major problems.)

With an economy-class layout, the jet can seat a whopping 853 passengers.

A group of black activists is skeptical of the new study made public last week charging that referee racism against black players exists in professional basketball.

Furthermore, the release of such a study charging racial bias by NBA referees -- as in white referees calling more fouls against black players than they do white players -- will "unnecessarily incite racial tensions," warn members of the nonpartisan black organization Project 21.

"Racism continues to generate headlines regardless of its plausibility. The only thing this study proves is that if you shout 'racism' you can get national media attention," says Project 21 fellow Deneen Borelli. "The authors of this study should be fouled out for exploiting racism."

Conducted by a pair of university professors, the study analyzed 600,000 foul calls over 13 seasons.

For four years, former Republican Rep. Fred Grandy , aka "Gopher" on the TV series "The Love Boat," has co-hosted with Andy Parks "The Grandy & Andy Morning Show" on WMAL-630 AM in the District.

During that time, not once has Mr. Grandy's wife of 20 years, Catherine Mann Grandy , had reason to pick up the telephone and weigh in on a particular show's topic of discussion. Until yesterday.

Until Mr. Grandy, commenting on a Time magazine article about the difficulties married couples face when one of the partners is far more attractive than the other, had the nerve to say that when it came to his marriage, he was the better-looking of the two.

Mrs. Grandy announced to her husband -- and all of Washington tuning in -- that she was having the locks changed on every door opened by a key.