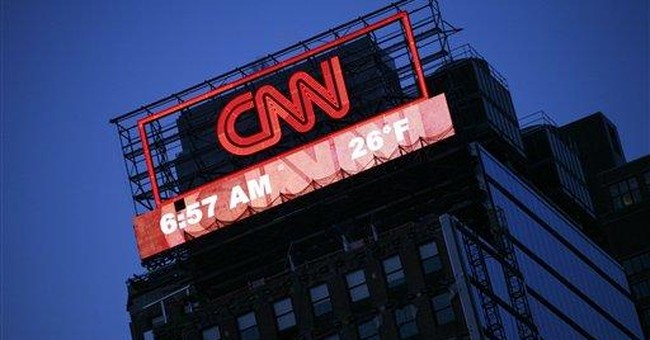 Just a few decades ago journalism in this country was actually about reporting the facts. Yes, journalists may have leaned to the Left, but at least reporters made an effort to be fair. Today, journalists are more interested in "making a difference" than in any antiquated standards and they play by PRAVDA rules. Every news story is filtered through an ideological prism and instead of asking who, what, when, how, and why, the stories are framed around a simple rule: How can we hurt the Right and help the Left?

Granted, there are a handful of exceptions like the late, great Tim Russert. ABC's Jake Tapper may also lean to the Left, but he at least seems to make an effort to be impartial. That being said, objective journalism is for all intents and purposes now dead in the United States. What that means is that you not only have to pay attention to the story the mainstream media's giving you, but you've also got to try to figure out how they're spinning the story. If you don't understand the story AND the slant, you don't understand the story. So, with that in mind, here are just some of the mainstream media's favorite tricks.

1) Leaving out context. The enormous amount of attention the Shirley Sherrod story has gotten is ironic, in that the story is that a liberal's comments were taken out of context the same way conservative comments are taken out of context every day of the week. As a matter of habit, the conservative side of the story is under-represented, buried, or even completely left out of most articles in the mainstream media. That's why there is a vast and thriving new media on the Right: because the mainstream media only provides half of the story and people have to go elsewhere to get the whole truth.

2) Sloppy errors that hurt conservatives. Nine times out of ten, if a mainstream media outlet gets a story wrong, it will either help liberals or hurt conservatives. Very seldom will you see an "honest mistake" that makes a liberal look bad. That's because they'll double and triple check anything that hurts their own side. When it comes to conservatives, fact checking isn't a big concern for most mainstream media outlets -- and good luck getting a correction. If you do, it'll be grudging and given a few weeks after the article comes out. By then, dozens of liberal bloggers will have repeated the story -- and they seldom let the facts get in the way of a good slam on conservatives.

3) The label game. A Republican who does something wrong is almost always clearly labeled as a Republican, while surprisingly often, a Democrat's party affiliation is mysteriously left out of stories that make the party look bad. You'll notice the same trend with think tanks. A conservative think tank is labeled as such. A liberal think tank is just a think tank. This game is even played with dead politicians. Would you know that George Wallace or Bull Connor were Democrats or that Republicans voted for the Civil Rights Act of 1964 in a higher percentage than Democrats? Not if you relied on the mainstream media to impart that information to you.

4) Painting the fringes as the mainstream. There's nothing wrong with covering birthers, morons with racist signs at Tea Parties, or losers like David Duke. However, it is a problem when those people are painted as being part of the mainstream of the conservative movement.

It's also hard to miss the fact that the mainstream media doesn't do the same thing with the Left. They don't show the public outrageous signs from anti-war rallies or the pro-illegal immigration protests and try to claim that those are widely expressed sentiments. How about the idea that Bush was behind 9/11 or at least knew about it and allowed it to happen? That was -- and still is -- a very popular conspiracy theory on the Left. Why isn't that nutball theory or the even more popular "We invaded Iraq for oil" wack-a-doodle head spinner an indictment of the Left the way conservatives are supposedly tainted by birtherism or some guy showing up with a racist sign at a Tea Party is supposed to be?

5) The front page or the back page. Have an embarrassing story about a conservative? That's front page material and if it's a half way decent story, it may be good for a week's worth of stories. Get a similarly embarrassing story about a liberal? Welcome to a brief article on page A-18 -- and that's if they run it at all. This is a powerful technique that can turn an extremely minor story like Cindy Sheehan protesting George Bush or waterboarding terrorists at Gitmo into a big, hairy deal. On the other hand, if Bill Clinton admits that he was offered Osama Bin Laden on a silver platter and turned him down, but the mainstream media refuses to cover it, do people even know that it happened?

6) The slant. Barack Obama has been roughed up a little bit by the media over the oil spill. But, how does it compare to the sort of coverage Bush got in the aftermath of Katrina? Even when the economy was doing well under Bush we got a steady diet of "Woe is me" stories about the unemployed. So, what happened when unemployment numbers skyrocketed after Obama got into office? Then Americans were introduced to the joys of "funemployment!" When Democrats win office, the American people "have spoken." When Republicans win, the American people are "throwing a tantrum." When Democrats disagree with the party in charge, they're speaking "the truth to power." But, when Republicans do the same thing, they’re seditious, potentially dangerous, mean spirited ogres from the "party of no.”

7) The lap dog "conservative" voice. It's bad enough that the mainstream media is completely dominated by liberals and that conservatives are barely allowed to get a word in edgewise. But to add insult to injury, far too often, after letting liberals have their say, the media then trots out widely despised mediocrities like David Frum, Kathleen Parker, Meghan McCain, Christopher Buckley, and David Brooks who they know will echo the liberal line. In other words, people get to hear the liberal point of view and then they get to hear the liberal point of view again, this time from a supposed "conservative." This is the Left's idea of "fair and balanced."