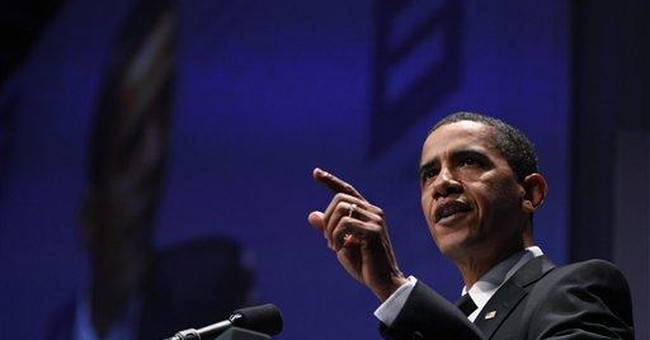 Because our servile journalists spend their days awash in ecstasy, thinking endlessly of the tingle that runs up their leg when they see Barack Obama, they don't seem to be able to find the time to ask him any tough questions. That leaves the rest of us out in the cold, dreaming of queries we'd like to see asked of the President of the United States -- if our press would turn in its Obama Fan Club memberships and start acting like members of the media again.

With that in mind, just as I did during the 2008 campaign, I've come up with 20 questions I'd like to see asked to Barack Obama. If you can find a journalist who remembers why he got into the profession in the first place, send this list over to him. Maybe we still won't get any answers, but at least the American people will get an idea of some of the questions that people should be asking.

2) Even before the stimulus bill, the CBO predicted the economy would recover in the 2nd half of this year. Since we're already getting to the point where the economy is on track to recover if there had been no stimulus at all, doesn't that mean the stimulus was a waste of money?

3) Since spending for Social Security and Medicare have gotten so large and out-of-control that it's imperiling our nation's financial future, can we really afford another massive new government health care program that has the potential to eventually dwarf both of them combined in cost?

4) Even your own economic team is predicting that you will run large deficits throughout your entire presidency -- even if you serve two terms. Given the size of our debt and the nervousness about it around the world, couldn't that policy have frightening economic implications for our country?

5) You've been publicly advocating allowing people who are in the country illegally to remain here and in many cases, start on the path towards citizenship. Setting aside how good of an idea that is in any case, why do you support a policy like that when the unemployment rate is 9.8% and every job held by an illegal means one more American will be out of work?

6) Your administration has been fond of saying that you've "created or saved" jobs. Aren't those numbers made-up and completely unverifiable?

7) When do you anticipate having the government completely out of GM and Chrysler?

8) Doesn't the special treatment that unions have gotten in the bailout of GM and Chrysler smack of favoritism and political corruption?

9) You've imposed certain limits on executive pay. Do you think we should have limits on what actors can make? How about lawyers? Union heads? Musicians? How about how much money someone should be able to make from speaking fees or book royalties?

10) Can you discuss the role you played at ACORN and whether you believe they should be able to receive any federal funds given the enormous ethical problems in that organization that have recently come to light?

11) Aren't you trying to get around the "advise and consent" clause in the Constitution by hiring so many czars?

12) Isn't it true that many of your czars have such controversial backgrounds that they couldn't have been confirmed, even by a heavily Democratic Congress?

13) So far, you have signed a number of bills that no one in Congress has read before they were signed. Do you think a member of Congress is being irresponsible if he signs onto a bill without reading it or at minimum, having a member of his staff read it?

14) Would you be willing to publicly ask your supporters to stop accusing people who disagree with your policies of being racist?

15) You have harshly criticized George Bush for putting prisoners at Gitmo. However, closing the facility turned out to be much tougher than you thought it would be and now, you are not on pace to meet your goal to close it within a year. Do you now believe your criticism of George Bush over the issue was misguided?

16) Given your lack of accomplishments on the world stage, shouldn't you have refused to accept the Nobel Peace Prize?

17) Many people fear that Manuel Zelaya is a wannabe dictator who was and is still trying to subvert the democratic process in Honduras. He appears to have been thrown out of office in accordance with the Constitution of that nation and moreover, he would have been term limited out of office in November. Why is it important to your administration that Honduras risk its democracy to reinstall Manuel Zelaya as president?

18) Our allies in Eastern Europe feel, with more than a little justification, that we have betrayed them and abandoned them to the Russians by refusing to build out our missile defense program in their countries. At this point, nobody seems to know what you got in return for this. So, what did we gain from Russia in return for throwing our Eastern European friends to the wolves?

19) Iran seems to be slowly, but steadily moving towards building nuclear weapons. Were Iran to acquire nukes, it would lead to a nuclear arms race in the Middle East, a dangerous conflict with Israel, and it could potentially lead to terrorist groups acquiring nuclear weapons. Yet, so far, you seem to be doing nothing of significance to stop Iran. Are you still willing to publicly guarantee that you will do whatever it takes to stop Iran from getting nukes?

20) Time and time again on the campaign trail, you talked about the importance of the fight in Afghanistan. Now, when your general in charge of the country is telling you what he needs to win, you seem to be wavering on giving it to him. Was all your talk about getting the job done in Afghanistan just a cynical political strategy?