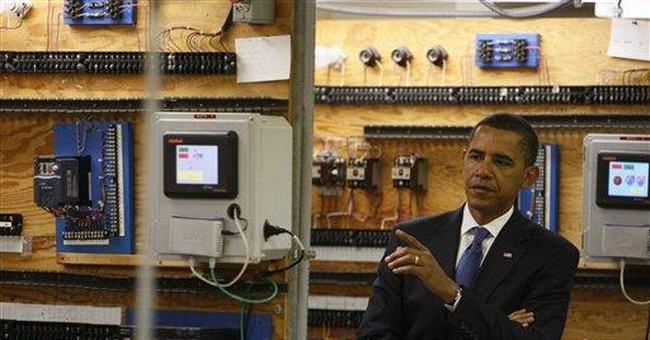 Because of our nation's extremely complex history with racial issues, there have never been any "good old days" for race relations in America. We began as a slaveholding nation that simultaneously held the contradictory belief that "all men were created equal," actually fought a civil war in large part over slavery, and eventually we moved on from government mandated discrimination against black Americans for their skin color to government mandated discrimination against white Americans for their skin color.

Because of our tumultuous, knurly history, opinions over race vary wildly. Some people, many of whom grew up with ugly bigotry during the sixties, talk about the country today as if Democrats like Bull Connor and George Wallace were still representative of the views of many Americans. On the other hand, some Americans deny racism exists at all -- although most Americans, quite wisely, fall somewhere in between.

Against this backdrop came Barack Obama with an unspoken promise: elect me as President and America can put race in the rear view mirror once and for all. After all, if Americans elected a black President, how racist could the country really be? Moreover, if, as many liberals claimed, Barack Obama would win the presidency unless America is racist, then didn't his victory mean America isn't racist?

Over the long haul, Barack Obama's victory will probably improve race relations in America, but over the short haul? Not so much. There are several reasons why that's the case.

1) Black Democrats put race first to elect Obama: It's no longer a surprise when black Democrats vote as an almost monolithic block for Democratic candidates over Republicans. It's just something that has come to be expected.

However, when black Americans started voting for Barack Obama over Hillary Clinton by the same lopsided margins that people normally saw in general elections, it sent a simple message: With black Americans, race comes first. If white Americans felt the same way, there's certainly no way that Barack Obama could ever have been elected President.

"I have a dream that my four children will one day live in a nation where they will not be judged by the color of their skin but by the content of their character."

It's rather discouraging to know that the overwhelming majority of black Americans only believe those words when it suits their purposes.

2) After Obama's election, many white Americans stopped taking racism seriously: Over the long haul, this will be a fairly healthy development. Too many people have used racism as an all-purpose excuse for their failures in life. But, after a black man with mediocre qualifications rose all the way up to the become President of the United States, it seems natural to ask how much of an impediment race can really be in America?

Certainly racism still exists, but in many people's eyes, it's just no longer a credible excuse for failure. This change in attitude is going to be difficult for a lot of black Americans to accept and many white Americans need to be careful not to allow themselves to be fooled into thinking racism is non-existent, as opposed to rare, because of Obama's victory.

3) The race card is being played constantly: Pre-Obama, Democrats often played the race card for political advantage because it usually worked. Right or wrong, good or bad, when someone cried "racist," more often than not, he got his way.

That playing of the race card has been so ever present and so over-the-top that what was once a political trump card has been reduced to a Two-of Clubs that usually produces little more than eye rolling. That's not good for the actual victims of racism, nor is it good for the legions of Americans who are genuinely offended because they've been falsely accused of being racists.

4) Obama's exploitation of the race card: Barack Obama is playing an extremely cynical game with the race card. Although his administration has slipped up and used it a couple of times ("Henry Louis Gates" & "Nation of Cowards"), Obama has generally tried to stay away from racial issues.

However, it's also worth noting what Obama DOESN'T DO. He doesn't ask his supporters to stop crying "racism." So, everyone who opposes him politically gets smeared as a racist, while he doesn't have to personally get his hands dirty. For a cynical, sleazy, manipulative politician, it's the best of both worlds. For the rest of the country, it's an ugly game that serves the country poorly.

5) Obama is no Jackie Robinson: Because he's the first black President, Barack Obama's presidency is particularly meaningful to black Americans just as Jackie Robinson breaking the color barrier meant a lot for the same reasons.

However, there is a huge difference between the two men: Jackie Robinson was genuinely talented. He ended up being Major League baseball's first Rookie of the Year. On the other hand, Obama is a bumbling, corrupt, megalomaniacal train wreck who has been a disaster at home and a weakling abroad. He can already legitimately be compared to the worst Presidents in American history -- yet, his approval rating with black Americans is still above 90%.

How healthy is it for the country to have 92% of black Americans approving of the job Obama is doing while only 42% of white Americans approve? When the gulf is that wide -- and getting wider -- what message does that send to both sides of the divide? Nothing good, I can assure you.