The 10 Biggest Amateur Mistakes By the Obama Administration So Far 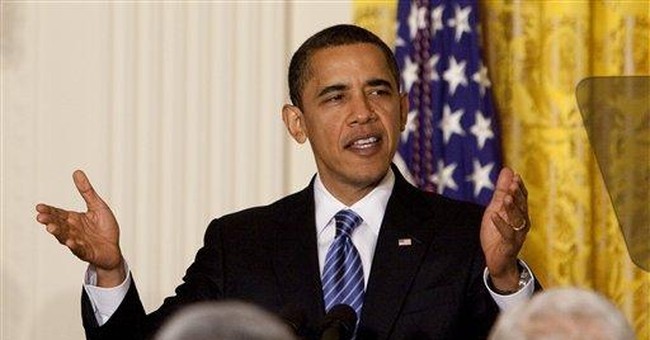 During the 2008 presidential campaign, people speculated whether someone like Barack Obama, who has never really run anything or had any major achievements other than winning political office, could handle a three AM crisis call. Well, as it turns out, Obama has been such a bumbling incompetent that he probably couldn't handle a trip through a Wendy's drive-in window without a teleprompter telling him what to order and whether he wants a Coke or a Mountain Dew. Even though Obama has been in office less than two months, he has already made more boneheaded errors than most Presidents do in an entire term.

10) After doing the "We've got to have this stimulus package passed right this second or the economy is going to explode" routine so convincingly that not one single soul in Congress actually had time to read the entire bill before it was signed, Barack Obama then promptly went on a three day vacation to celebrate before he signed it. If the bill was so important that no one could even have time to read it before it was passed, then why wasn't it important enough for Obama to skip dinner at Table Fifty-Two in Chicago to immediately make it a law?

9) In a juvenile stunt, reminiscent of something a third grader might come up with, Secretary of State Hillary Clinton handed Russian foreign minister Sergei Lavrov a button that was supposed to say "reset." However, incredibly, the word on the button translated to "overcharge," not "reset." Apparently, despite the enormous deficit the government is going to run up this year, Team Obama forgot to budget enough money to hire someone who speaks Russian for the State Department. If only America could just press a button and reset the entire Obama presidency so far and start over.

8) When Barack Obama was trying to sell America his stimulus bill that will put the country more than a trillion dollars in debt, he alerted America that, "Caterpillar's chief executive…told him the company will rehire some laid-off workers if the stimulus bill passes." But, when he was asked about Obama's statement, Caterpillar CEO Jim Owens said, "I think realistically no. The truth is we're going to have more layoffs before we start hiring again."

7) A large part of Barack Obama's appeal was the idea of racial reconciliation. The implicit deal was that by putting our first black President in office, America would prove once and for all that it wasn't racist, and we could put all this silly squabbling about race in the rear view mirror once and for all. However, not only has it failed to work out that way, Obama's Attorney General Eric Holder issued an an insulting challenge on the topic to the American people,

Maybe someone should ask the poor guy who did an innocent cartoon for the New York Post that made fun of the stimulus bill and the rampaging monkey that was in the news why people might be afraid to get dragged into a debate about race.

6) Typically, Presidents don't pick fights with pundits and talk radio hosts for obvious reasons. It draws more attention to their criticisms, elevates their status, and comes across as thin skinned and a little creepy, much like Richard Nixon's "Enemies list."

But, the Obama Administration hasn't figured this out -- yet. They've launched attacks at Rick Santelli, Jim Cramer, and most prominently, Rush Limbaugh. Ratcheting up the creepiness factor a couple of notches in Limbaugh's case, the President of the United States, members of the mainstream media, and liberal interest groups are all coordinating an attack on a private individual for daring to criticize Barack Obama. That sounds more like something that would happen in the old Soviet Union than in the United States.

But happily, if you look at the results of the White House campaign, it has backfired in every instance. Rush Limbaugh is on pace to make more revenue by the end of March than he made all last year, there are Santelli inspired "Tea Parties" popping up all across the country, and every criticism of Obama that Jim Cramer utters is now linked by the Drudge Report.

5) The first task a new President engages in is bringing a staff on board. After choosing Joe Biden, who has behaved like he was kicked in the head by a horse as a child, things have really gone down hill from there. Bill Richardson quit as Commerce Secretary after coming under investigation. Republican Senator Judd Gregg accepted, then declined Obama's offer to be his Commerce Secretary over irreconcilable differences. Tom Daschle quit after having tax problems. So did Nancy Killefer. Ron Kirk also has tax problems, but he's trying to hang in there like Hilda Solis and another cabinet member who gets his own special entry -- and keep in mind, Obama has a considerable number of positions left to fill. Hey Barry, the word of the day is "vetting." You should look into it.

4) George Bush spent a lot of time strengthening our ties to Eastern European nations like Poland and the Czech Republic during his two terms in the White House. Yet, it took Barack Obama less than two months to undo much of Bush’s good work with those nations.

Obama wrote a "secret" letter to Dmitri Medvedev offering to leave Poland and the Czech Republic twisting in the wind on missile defense in return for Russia's help in stopping Iran from getting nukes. The problem was that the letter went public even as Russia turned down the deal. So, in other words, our friends in Eastern Europe were publicly alerted that we were willing to sell them down the river to the Russians, who they were already afraid of, and yet we got nothing out of the deal. That's a real "welcome to the Big Leagues" maneuver from the Russians for our naive, rookie President.

3) After making a stink by sending back a Winston Churchill bust, Barack Obama blew off a press conference with British Prime Minister Gordon Brown -- but, the real kicker was the gifts.

After Brown presented Obama with a pen holder crafted from the timbers of the 19th century British warship HMS President (whose sister ship, HMS Resolute, provided the wood for the Oval Office's desk), Obama offered up ... 25 DVDs of American movie classics.

The Brits offered Obama a thoughtful, priceless gift and he handed them back a bad Netflix queue that was probably picked up at Wal-mart earlier that day.

2) Choosing tax cheat Timothy Geithner to be his Treasury Secretary was such an incredible screw up that it deserves it own entry. It's mind boggling that any Administration would choose a tax cheat to run the department that's in charge of the IRS. Moreover, in Obama's case, he has already announced plans for the largest tax hike in American history, nearly a trillion dollars, and the man in charge of that effort doesn't pay his taxes? Prediction: a few years from now, if the New York Times isn't out of business by then, they'll write an article telling you that they're baffled, baffled I tell you, by the massive increase in the number of people cheating on their taxes.

1) Barack Obama may be a liberal thriller, but he's also a stock market killer. Since he came into office, his Bunyanesque new spending proposals, his plans for a trillion dollar tax hike, his regular badmouthing of the economy, and his incessant tinkering with banks and the housing market have caused the stock market to go into a freefall. Granted, stocks would have likely dropped anyway because of the economic crunch we're in, but the market wouldn't have already reached the lowest level since 1997 without lots of help from Obama. As Democratic financial wiz, Jim Cramer, has said of Obama’s performance, "it's amateur hour at our darkest moment" and it's "crushing nest eggs around the nation."