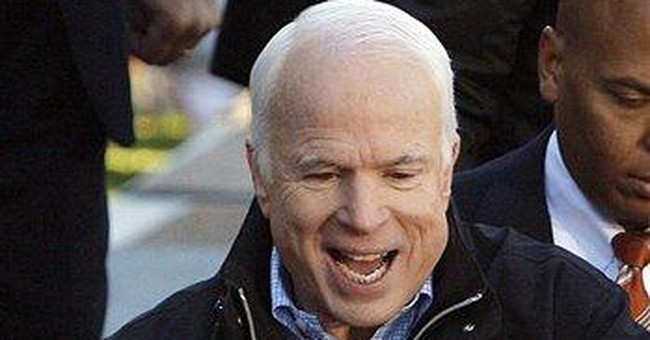 1) John McCain doesn't believe we should raise taxes on anybody during a recession. Obama does and that will prolong our economic woes.

2) John McCain has been endorsed by the NRA. Barack Obama once supported a complete ban on the manufacture and ownership of handguns in America.

3) John McCain co-sponsored a bill to fix Fannie Mae and Freddie Mac back in 2005. Had it passed, we wouldn't have had a bailout crisis. Obama took in the 2nd largest amount of money from Fannie Mae/Freddie Mac. In other words, McCain tried to fix the problem while Obama was in the back pocket of the shady operators who cost the American people over 700 billion dollars.

4) Barney Frank has promised a 25% cut in defense spending if Barack Obama gets into office. John McCain would not support that policy.

5) Both Barack Obama and John McCain publicly pledged to take public financing for their campaigns. McCain kept his word. Obama lied. If he will lie to the American people about that, what else is he lying about?

6) Barack Obama has received hundreds of millions of dollars in earmarks, including a million dollar earmark for his wife's hospital. John McCain has never taken an earmark.

7) John McCain's health care plan will make health care more affordable, cover more people, and will keep the market in control. Barack Obama's plan for socialized medicine will put government bureaucrats in charge, will lead to long wait times for operations and lead to a poorer quality of health care. If you think health care is expensive now, wait until you see how much it costs under Barack Obama when it's "free."

9) Sarah Palin is a conservative reformer who has taken on oil companies and her own party as a mayor and a governor. Joe Biden is a career Washington insider with no executive experience who's most famous for gaffes, making things up, and being on the wrong side of almost every foreign policy issue from Vietnam to the surge.

10) Barack Obama spent twenty years going to an anti-white, anti-American church run by Jeremiah Wright. He didn't go to that church for so long because he disagreed with the message.

11) John McCain once fought for our country in Vietnam. Barack Obama has never fought for anything but his own career.

12) John McCain has literally had to decide whether to go home from a POW camp or stay and be tortured. He made the right decision. Barack Obama's first tough decision will be made in the White House.

13) John McCain pals around with Joe Lieberman, Lindsey Graham, Sarah Palin, and Phil Gramm. Barack Obama has "pal'd" around with Bill Ayers, Jeremiah Wright, Michael Pfleger, Frank Davis, and Tony Rezko. What does that say about each man's character?

14) John McCain always holds his hand over his heart for the national anthem and has never refused to wear a flag pin after calling it a "substitute for, I think, true patriotism." Do we really want to have the first President in our history who doesn't love his country?

15) For good or ill, John McCain is a moderate, but Barack Obama was the most liberal senator in America in 2007. Do you trust someone that liberal to run the country?

16) When there's an international crisis at 3 A.M. and the phone rings, you can't vote "present."

17) This is what Barack Obama thinks of Americans who live in small towns,

And it's not surprising then they get bitter, they cling to guns or religion or antipathy to people who aren't like them or anti-immigrant sentiment or anti-trade sentiment as a way to explain their frustrations.

How can someone, who thinks so little of people who don't live in big cities, truly represent all Americans in the White House?

18) Do you really want to spend the next four years listening to Barack Obama's supporters cry "racism" every time somebody criticizes or disagrees with him?

19) The mainstream media has been more biased than at any time in our lifetimes for Obama and they've launched an absolutely unprecedented smear campaign against Sarah Palin -- and worse yet, Sarah Palin's family. Do you want to reward and encourage more of that kind of behavior in the future by putting Barack Obama in the White House?

20) Barack Obama is a socialist who wants to "spread the wealth around." John McCain wants to spread the opportunity around instead of making people dependent on government.

21) John McCain has promised no more bailouts. Barack Obama has not.

22) John McCain favors judges who will stick to the Constitution. Barack Obama says he wants judges with "empathy." Would you want an umpire of a baseball game who sticks to the rules or one who has "empathy?"

23) McCain has promised to balance the budget in four years and whether he makes it or not, he will undoubtedly cut spending. Obama will run trillion dollar deficits. You do the math.

24) We have the 2nd highest corporate tax rate in the world and it is driving our companies overseas. John McCain wants to cut the tax to keep businesses in the U.S. and create jobs. Barack Obama does not.

25) Barack Obama will sign the Union Card Check Bill that will end the right to secret ballots for union members, thereby crippling more American industries via unionization. The unions are destroying the Big 3 automakers and the airline industry -- and under Obama, they'll be a further drag on the American economy. Furthermore, since when do we give up the right to have a secret ballot in America? John McCain opposes the Union Card Check Bill.

27) Barack Obama wants to force gay marriage on the whole country via the court system, which is why he favors overturning the Defense of Marriage Act. John McCain thinks marriage should be between a man and a woman, which is why he supports leaving DOMA in place.

28) John McCain favored the surge. Barack Obama did not. So, if Barack Obama had been President over the last four years, we would have already lost the war in Iraq.

29) Barack Obama wants to leave Iraq in 16 months, whether we win or not. John McCain doesn't want to risk seeing the victory our troops have bled and died for thrown away for politics' sake.

30) It would literally be dangerous to the future of our country to have a large Democratic majority in the House, a large majority in the Senate, and Obama in the White House.