Taking The Chickenhawk Argument To Its Logical End 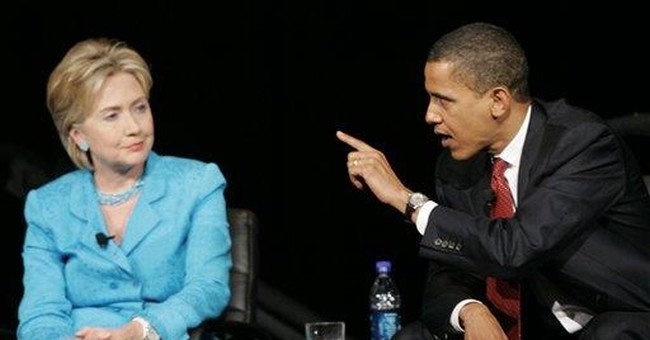 Last week-end, three chickenhawks were feted by a bunch of drooling, whooping extremists at a convention. What a disgrace! How dare these candidates, none of whom have served in the military, advocate that we continue fighting in a war where American troops are dying? Furthermore, not a single one of those armchair warriors has a child serving in the military. If those candidates want to be eligible to lead this country, they should demand that their children immediately enlist to go fight in the war!

That's why I'm calling on all of my leftie brethren to demand that Barack Obama, Hillary Clinton, and John Edwards all remove themselves from consideration as President, since anyone who has never served and advocates war in Afghanistan is obviously a chickenhawk who is unfit to lead. That's why the 101st Fighting Keyboarders at the Yearly Kos convention should be ashamed, ashamed I say, to have not booed those bloodthirsty warhawks off the stage when they talked about wasting the lives of our troops on a "war of choice" in Afghanistan!

Moreover, we don't want to be hypocrites about the chickenhawk argument, do we? So, how can we demand that policemen risk their lives trying to defend us from violent criminals if we're not willing to do it ourselves? If we really supported the police, we wouldn't want them to put their lives on the line trying to arrest crooks -- after all, those people are dangerous and the cops could get hurt. You don't agree with that? Then why don't you go join the police department right now!

The same goes for firemen. How can we ask these brave firefighters to risk death and disfigurement trying to put out fires? If you really care about firefighters and think that they're brave, decent heroes who are putting their lives on the line to protect us, then you should care enough to demand that they no longer have to jeopardize their lives fighting fires. If you don't agree with that, then send your children over to join your local fire department!

Only people who have been firefighters, policemen, or soldiers -- or more importantly, those who are against them risking their lives -- are allowed to speak up. The rest of the firemongers, crimehawks, and Bushbots cannot have an opinion unless they quit their day jobs, work as a fireman, then quit that job, and work as a policeman, and then quit that job and serve as a soldier. After that, they'll be allowed to have an opinion, but in all fairness, I should warn you that the mainstream media will ignore everything they say at that point because most journalists agree with the people making the chickenhawk argument.

That being said, don't get the idea that it's all belly scratches, chocolate kisses, and rainbows for those of us who are serious about the chickenhawk meme. We do have to make a few sacrifices.

For example, since the President of the United States is Commander-In-Chief and may need to go to war, yet it's morally unacceptable for a chickenhawk to send us into battle, all of the candidates without military service should be disqualified -- which is a little embarrassing for Democrats since George W. Bush, who was mocked relentlessly for serving in the National Guard during the Vietnam War, at least served in the military, unlike all of the Democrats except for Chris Dodd and Mike Gravel. Democratic nominee, Chris Dodd? That doesn't have much of a ring to it, but if those of us who call people chickenhawks believe what we say, our choices on the Democratic side are very limited.

Also, we need to amend the Constitution so that only members of the military can vote or serve in office. After all, if we don't want chickenhawks -- like Bill Clinton -- making decisions about sending our troops into harm's way, the only way to make sure it doesn't happen is to require military service as a prerequisite for serving in office.

Admittedly, that will be tough for a lot of people making the chickenhawk argument since they're almost always on the Left and members of the military, as a general rule, tend to have much more in common politically with Michelle Malkin than Michael Moore, but sometimes you've got to take a hit for your principles, right?

I mean, most of the people making the chickenhawk argument aren't the sort of liberals who support keeping the ROTC off of college campuses, enjoy reading anti-military blogs like the Daily Kos, and then call people who disagree with them chickenhawks just to distract everyone from their contempt for the military -- are they?