Democrats Should Put The Country Ahead of Their Politics 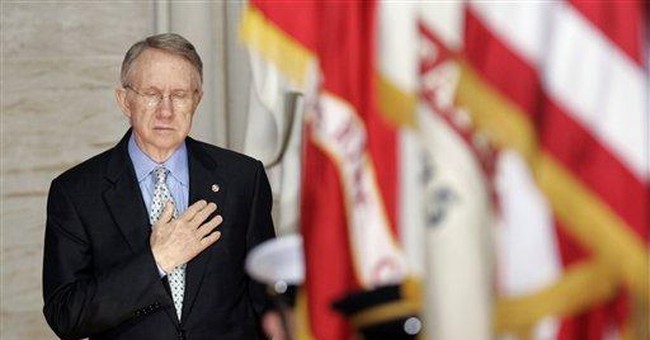 If you listen to the Democrats, you’ll hear that the war in Iraq was poorly planned and that Bush didn't think far enough ahead about the consequences of our actions in that country. Now that we have the benefit of hindsight, it's hard to argue with that. Bush should have done a better job of planning what came after that first "Mission Accomplished" banner when we'd defeated Saddam's armies in the field, but hadn't ended the resistance.

That being said, it's rather odd to have the very same people who have been bitterly complaining about Bush's poor planning before the war, doing no planning of consequence to deal with their choice to lose the war in Iraq to Al-Qaeda.

Why don't we hear people like John Murtha, James Webb, Harry Reid, and Nancy Pelosi explaining to the American people why we're better off choosing to lose to Al-Qaeda today than continuing on to what may very well be victory next year? Perhaps they don't feel the need since the American people are tired of the war and since MSM outlets like the New York Times, Washington Post, and Los Angeles Times have for all intents and purposes acted like an arm of the Democratic Party when it comes to covering the war.

However, the consequences of cutting and running in Iraq or setting a timeline that pulls our troops out at a certain date would likely be catastrophic.

Consider the Iraqis who risked death to go vote at the polls. Think about the brave Iraqis who are literally fighting shoulder to shoulder with our troops to make their country safe for democracy. What would happen to them if we left before they could defend themselves? They'd likely be butchered by the hundreds of thousands, hung from lampposts, buried alive, and tortured to death in the streets. The level of violence and savagery could and very likely would ramp up to the level of genocide if we were to leave too quickly. Where's the honor and decency in that? How do we abandon millions of our friends and allies to die, perhaps only a few short months before they can defend themselves?

Moreover, how do we explain this to the troops? We sent them into a war zone where more than 3600 of them have been killed and 26,000+ soldiers have been wounded. We've extended their tours of duty, we've kept them away from their families, and we've put them through the ringer. So now, how do we get to a point, mere months from when the Iraqis may be able to handle their own security, months from when victory will likely be possible and say to them, "I know you guys have gone through hell to win this thing over the last 4+ years, but the war is unpopular, an election is right around the corner, and so we're going to have to let Al-Qaeda defeat you for the sake of politics. Hope there aren't any hard feelings after you sacrificed so much and then had a bunch of politicians snatch victory from your grasp at the very last moment just to increase their chances of getting re-elected."

Then there's the possibility that an American withdrawal could lead to a regional war. Now, to many people, that's no big deal. So what if Iran, Saudi Arabia, Turkey, Syria start a proxy war, take shots at each other, or rip off little chunks of Iraq?

Well, for one thing, it could mean that Iraqi oil supplies are cut off and Iranian and Saudi oil supplies are disrupted. That could cause an enormous spike in gas prices that could cost everyone reading this more at the pump and slow down economic growth.

Additionally, it could mean a huge increase in funding, training, and support for terrorist groups that are willing to fight in Iraq. For example, if America runs, but Al-Qaeda doesn't, it would hardly be a surprise if the other nations in the region were more willing to aid Al-Qaeda. The same goes for Iran. If Iran is viewed as having helped to run America out of Iraq, it could lead to more fighting with their neighbors, but it's also possible that some nations in the region would be more willing to defy us and acquiesce to their demands since we would be viewed as weak and lacking willpower. Could we see a much greater role for Hezbollah in Iraq if the U.S. were to flee? Sure. It's not even outside the realm of possibility that we could see these terrorist groups form a "state within a state" inside of Iraq without the U.S. being able to do much about it. Once we pull our troops out, we lose much of our ability to influence events on the ground.

It's also worth noting that if we pull out before the Iraqi government is ready to defend itself, it will be viewed by the world over as an enormous victory for Al-Qaeda over the United States. That will give an enormous bump to their recruiting -- encourage more nations to cooperate with them and less nations to cooperate with us -- and it may very well lead to more attacks in America as Al-Qaeda shifts its primary field of battle from Iraq to the U.S.

Furthermore, have liberals really considered the consequences of having Democrats in Washington decide to lose a war that our generals in Iraq and a significant portion of the American public still believe we can win? Five years down the line, is it really going to be healthy to have a large percentage of the American public believing, with good reason, that the Democratic Party deliberately allowed Al-Qaeda to defeat American troops because it would help the Dems politically? If you think the political atmosphere is poisonous today, just wait until Iraq erupts into genocide and madness, while Al-Qaeda is crowing about their victory over America, and everyone knows that the Democrats made it happen.

Long story short, having the United States lose a winnable war in Iraq would be a disaster all the way around and that's why I would implore Democrats in Congress to put their country ahead of petty political concerns for once, to help avert the disaster they're setting us up for in Iraq.