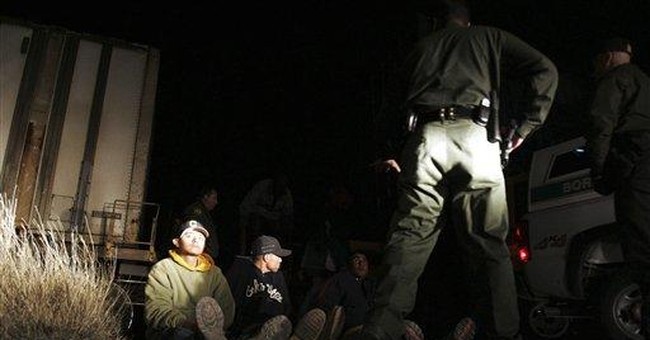 One of the common refrains from the supporters of the Senate amnesty plan was that the people who opposed the bill weren't offering any alternatives. However, nothing could be further from the truth. The problem wasn't that there was a shortage of alternatives, it was that the alternatives were designed to end open borders and amnesty, and that's not something the bill supporters were interested in doing.

But, enough talk about the past. Instead, let's talk about the steps we need to move forward and deal with the illegal immigration problem once and for all.

Furthermore, how can it be that an enforcement first bill cannot pass when everyone from Ted Kennedy, to Harry Reid, to Lindsey Graham, to Michael Chertoff says that they support enforcing our immigration laws and securing the border? Let's put together a package, put it to a vote, and let the American people see who's interested in curtailing illegal immigration and preventing terrorists from walking across our borders -- and who's not.

#3) We need to fully staff our border patrol: Simply put, the border patrol, especially with no fence in place, does not have the manpower to adequately cover our southern and northern borders. Building the fence will help, but the number of border patrol agents needs to continue to increase.

#4) We need to fully staff Citizenship and Immigration Services: The agency that is in charge of handling legal immigration, Citizenship and Immigration Services, is poorly run, staggeringly undermanned, and working with obsolete equipment. This leads to enormous amounts of red tape for legal immigrants, poor security screening of people coming to this country legally, and an enormous number of people who come here legally and overstay their visas. This situation desperately needs to be corrected not only to help stop illegal immigrants, but because it's horribly unfair to the people who are doing the right thing and coming to this country legally.

#5)We need an exit visa program: 40% of the people who are in this country illegally have simply overstayed their visas. This will be an unsolvable problem, especially with Citizenship and Immigration Services being such a disaster area, until we put an effective exit visa system in place that will allow us to know when people have left the country.

#7) No more anchor babies: Today, if a 9 month pregnant illegal alien sneaks across the border and has a baby 2 minutes later, the child is an American citizen, the mother is eligible to receive government benefits on his behalf, and the child is an "anchor" that the mother can use to make it tougher to remove her from the country. This needs to change.

Some people think it would take a constitutional amendment to pull that off. That was once my opinion as well, but the relevant portion of the 14th Amendment of the United States actually says,

Many people, myself included, believe that illegal aliens are "subject to the jurisdiction" of the nation they come from, not the United States, which means that we could pass a law that prevents the children of illegals from becoming an American citizen without a constitutional Amendment.

#8) We need to put an end to sanctuary cities and drivers’ licenses for illegal aliens: If cities refuse to follow federal law in regard to illegals by becoming sanctuary cities or, if states severely undermine our ability to catch illegals (and simultaneously make it easy for them to commit voter fraud) by allowing them to have drivers’ licenses, the federal government should retaliate by cutting federal funds to that city and state until they change their minds.

#9) Refuse to allow anyone caught in the United States illegally to ever become a citizen or return for any reason: This would give illegals who may want to become citizens, participate in a future guest worker program, or even visit relatives in the United States a strong incentive to make sure that they follow the law -- and it would also strongly discourage illegals who might be tempted to come here to get in on some future "amnesty" -- since all it would take would be getting caught one time to put an end to any hope of a legal future in the United States.

#10) End catch and release: Despite what you may have heard to the contrary, when illegal aliens are caught by local police, oftentimes, the Feds refuse to take the illegal alien off their hands. That means that once the illegal is released, he blends right back into the crowd.

Another asinine practice is capturing illegal aliens and simply releasing them with a summons to appear in court. Of course, almost no one ever shows up since the penalty for being here illegally is deportation. No illegal alien captured by our government should ever be allowed his freedom until after he is deported. If that means we need more manpower, more beds, or to hold them in local prisons until they can be sent home, so be it, but it is extremely foolish to catch an illegal alien and then just let him go.