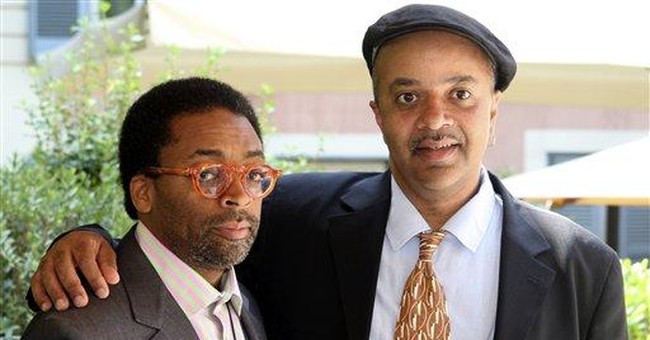 If you look back through American history and find a black American being enslaved, lynched, railroaded, or persecuted, 99 times out of a hundred, you'll find a Democrat behind it. The hated and feared KKK? Throughout most of its history, it was little more than a hooded, thuggish arm of the Democratic Party.

Democrats cooked up the great society, welfare, food stamps, and all other manner of government goodies because they said they wanted to "help" people. What was the result of that "help?" The Democrats did something that they hadn't managed to do when they enslaved black Americans, persecuted them with Jim Crow laws, or terrorized them with the Ku Klux Klan: they managed to nearly destroy the black family. According to Walter Williams,

"In 1940, the illegitimacy rate among blacks was 19 percent, in 1960, 22 percent, and today, it's 70 percent. Some argue that the state of the black family is the result of the legacy of slavery, discrimination and poverty. That has to be nonsense. A study of 1880 family structure in Philadelphia shows that three-quarters of black families were nuclear families, comprised of two parents and children. In New York City in 1925, 85 percent of kin-related black households had two parents. In fact, according to Herbert Gutman in The Black Family in Slavery and Freedom: 1750-1925, "Five in six children under the age of 6 lived with both parents."

The story is no different when it comes to education. Many black children are stuck in disastrous, failing schools. That's why it's no surprise that a majority of black Americans support school vouchers, just like the Republican Party. But, the Democratic Party, at the behest of the teachers’ unions, has worked ceaselessly to keep black children trapped in mediocre schools by killing voucher programs.

Look to black neighborhoods that are overrun with crime. In some of the worst neighborhoods, you have drug dealers on the corners, thugs breaking into houses, and people afraid to let their children play in their yards. The Republican solution to this is to get the criminals off the streets so that they can't harm innocent people. The Democratic solution is to treat the cops like bad guys, the criminals like victims, and to try to put the gangbangers and psychos back on the streets. Newsflash: black criminals mostly live in black neighborhoods and prey on black Americans. Every time a black criminal is put back into society, chances are that he's going to primarily victimize other black Americans.

Speaking of victimization, how many black Americans have lost their jobs to illegal immigrants or have money taken out of their pockets because illegals -- who aren't even supposed to be in this country -- are depressing their wages? Yet, who's sticking up for the Americans losing their jobs to illegals? Republicans. And who wants to leave the border open to millions of workers from South of the border who'll be taking jobs from American workers, including black Americans? The Democrats.

Of course, we can’t forget about abortion. Like most black Americans, the Republican Party is staunchly opposed to abortion. But, Democrats don’t see it that way – and don’t kid yourself, part of the reason why Democrats are so rabidly pro-abortion is because they believe it helps lower the number of black Americans. Today, they won’t come out and say that, but Margaret Sanger, the founder of Planned Parenthood, was never so circumspect about her motives. From La Shawn Barber, ”More controversial is Sanger’s ‘Negro Project,’ devised in 1939. The eugenicist set out to implicate black ministers and doctors in her efforts to spread her message of contraception, sterilization, and abortion in the black community. ‘The most successful educational approach to the Negro is through a religious appeal. We do not want the word to get out that we want to exterminate the Negro population, and the minister is the man who can straighten out that idea if it occurs to any of their more rebellious members,’ she wrote.”

Democrats have convinced more black women to kill their own babies via abortion than they ever managed to string up back when they hid their faces under sheets. Then there are the Left's prize programs: Affirmative Action & racial preferences. Here's what Walter Williams had to say about how these programs turn so many black college students into drop-outs by getting them into schools that are academically out of their league.

"You find the same thing at MIT. Black students in the engineering department, they score in the top 5% nationally in the quantitative portion of the SAT. However, close to 50% are on academic probation or flunking out at MIT. What's the problem? Well, the rest of the students in the engineering department are in the top 1%, which puts the black students at MIT near the bottom of the student body. So those black students who are being turned into failures at MIT, if they'd gone to engineering school at the University of Pennsylvania or Cornell, they'd be on the Dean's list.

So it's kind of like you're saying to me, ‘Walter, would you teach me how to box?’ Then, the first fight I get you is with Lennox Lewis. Now you might have the potential to be a good boxer, but you're going to get your brains beaten out before you learn to bob and weave. So, the question for black people is, ‘Do we have so many youngsters who score in the top 5% nationally that we can afford to have them turned into failures at MIT in the name of diversity and multiculturalism?’ For me, my answer is no."

Black Americans have been voting for the Democratic Party for 40 years and they may be voting for them for another 40 years the way things are going. This is despite the fact that the worst places for black Americans in this country to live are always run by Democrats. Marion Barry can get caught smoking crack, Ray Nagin can prove to be totally incompetent during Hurricane Katrina, and William Jefferson can get caught with bribe money in his freezer, but black Americans dutifully go to the polls and vote them right back into office. Know why? Because the race hustling poverty pimps have convinced black Americans that it's better to vote for a crack addict, an incompetent, or a crook than to vote for a Republican. This has put black Americans in a position where Democrats don't take them seriously because they know they have the black vote locked up and Republicans have written off black voters because they believe that no matter what they do, black Americans won't vote for them.

Until that changes, the Democrats will keep systematically undermining black Americans with their "help" and telling them that it's for their own good, because minorities just can't make it without the help of white, liberal Democrats.