Eight Reasons Why GOP Senators Should Vote Against The Amnesty Bill 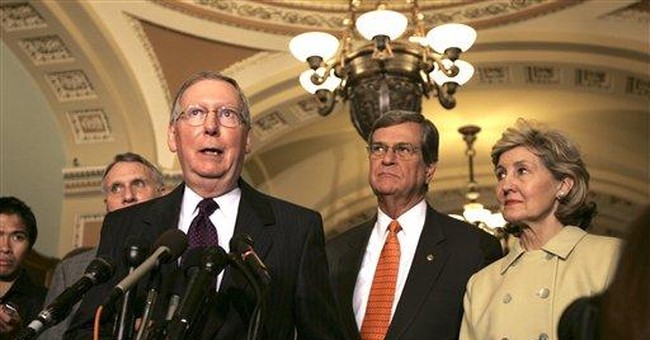 1) This bill is incredibly unpopular with the general public. In poll after poll, you'll find that the American people are strongly opposed to this bill. Rassmussen shows the public opposing it 50% to 23%. Survey USA says the public is against it 46% to 36%. At Pew Research, they say that, "41 percent of those who knew something about the bill oppose it, with just one-third favoring it." Even Democracy Corps, which is a Democratic polling firm, says that Independents and Republicans don't want the bill and Democrats are split 47 to 47 on whether they want the bill to pass.

2) This bill is even more unpopular with conservatives than with the general public. According to NRSC Chairman John Ensign, phone calls, emails, and faxes are pouring into GOP offices and running 100 to 1 against the bill. If the bill passes, Tom Tancredo has pledged to campaign against pro-amnesty Senators in 2008 and I've set up a group called The Payback Project to do the same thing. Additionally, 96% of the conservative bloggers polled over at Right Wing News this month indicated that they were, "pleased that the Senate immigration bill did not pass." Meanwhile, the poll numbers of politicians connected to the amnesty bill like Mel Martinez, John McCain, and George Bush are plunging along with GOP fund raising numbers.

3) Despite what some people are saying, this bill probably isn't going to permanently alter the GOP's standing with Hispanics one way or the other. Most Republicans are opposed to this bill, so if it passed, over their objections, with mostly Democratic votes, why would Hispanic Americans permanently become enamored with the GOP? On the other hand, although Democrats tend to generally favor the bill, they're deeply divided over the issue as well. Unions oppose the bill, as do many black Democrats, and a large number of blue dog Democrats. So, they’re not united on it either. Additionally, why would American Hispanics tie their whole future to one party simply because it's more willing to let in foreigners who are of the same race? For example, if someone suggested that white Americans would permanently back whichever party would allow 12 million Swedes and Germans to enter the country illegally, no one would take it seriously. So, why should we believe that most Hispanic Americans think that way?

4) Even if this bill passes the Senate, chances are that it's not going to pass the House. Given that the House is discussing breaking the bill up and that a bill denying federal emergency services to sanctuary cities just passed with 50 Democratic votes, it's difficult to see how a comprehensive immigration bill could make it through the House. Why push a very bad, very unpopular bill that is also very unlikely to become law?

5) No fiscal conservative could ever support this bill. According to the Heritage Foundation, this bill would cost taxpayers 2.6 trillion dollars in government benefits over the lifetimes of the illegal aliens who are allowed to become citizens. How can the supporters of this bill possibly justify adding 2.6 trillion dollars to the national debt?

6) The probationary Z visa program is an unworkable nightmare. After the bill is passed, illegals can apply for a "temporary" Z visa. Given that these Z visas are going to be handled by a Federal bureaucracy that is already broken and that the Feds have only 24 hours to screen each application, you can be sure that everyone from terrorists to career criminals will be waved on through without a second glance. What this will lead to is story after story, for years on end, about terrorists, pedophiles, rapists, and murderers with long criminal histories who were approved for permanent residence in the United States. Combine that with the fact that Z visa applicants can't apply for citizenship for 8 years, which will tempt conservatives to try to kill the program before that happens, and it will be virtually guaranteed that the immigration issue will stay on the front burner for years to come if this bill passes. Given the nasty infighting that this bill has caused in the GOP this year, is that really something that Republicans should want?

7) The Congressional Budget Office estimates that this bill will only reduce the number of illegals entering the United States by 25% a year. Since ending the influx of illegal aliens into the United States is the entire point of the bill to most people, a reduction in illegal immigration that small would defeat the entire purpose of pushing it through and guarantees that Congress will have to deal with the exact same issue down the road.

8) The "clay pigeon" strategy being employed on this issue is precedent setting, and may be used against conservative Republicans for years to come. There's no need to get into a lot of detail about Parliamentary procedure, but here's what you need to know: Mitch McConnell, Trent Lott, and pro-amnesty Republicans are planning to team up with Harry Reid to deny conservatives the right to offer amendments on this immigration bill.This is dangerous for Republicans because as long as they're in the minority -- and that will probably be for years to come if this bill passes -- this procedural maneuver could be used again and again to keep conservatives from being able to offer up amendments on all sorts of different bills. Once it's done on immigration, who's to say that it won't be done dozens more times on all manner of issues over the next few years?