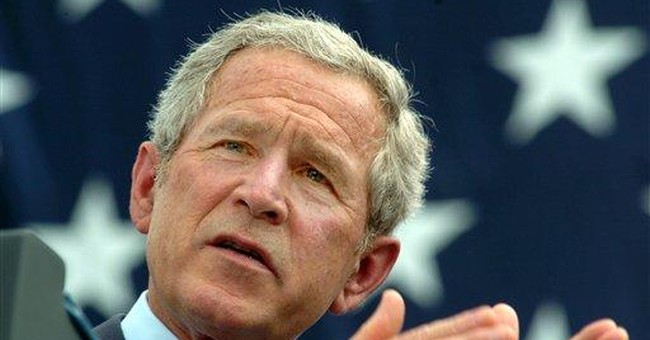 The amnesty bill in the Senate is undoubtedly one of the worst, most destructive pieces of legislation to come down the pike in the last half century and not only could it do cataclysmic damage to the Republican Party, it has the potential to send our country into a downward spiral from which it would never truly recover. Not only would this bill fail to secure the border, it would encourage millions of new illegals to pour into the country, demographically flood the conservative movement out of existence, add more than two trillion to the national debt, and it would set up a never ending cascade of amnesties that would permanently change our country for the worse.

First of all, let's start with the border. The problem with securing our border has always been that our politicians haven't wanted it to be secured. That's because the Democrats see every illegal alien who waltzes over the border as a potential voter and the Republicans in Washington don't want to cut off the supply of cheap labor to their allies in the business community.

Once you understand that, you know why George Bush has been dragging his feet on building the wall and why extremely effective programs, like Operation Vanguard in Nebraska, have been killed by the politicians: it's because they desperately want the flow of illegal immigrants into the United States to continue unabated. It's also why the "one time only" amnesty for roughly 2.7 million illegal aliens in 1986 has failed and why its much bigger, uglier stepsister in the Senate will fail again if this bill is passed -- because the politicians in D.C. only care about the amnesty and once they get it, they will methodically work to kill the enforcement and border security measures. So, if you don't get the security first, you won't ever get it.

Next, what will happen if we bring in 12-20 million illegal aliens? Well, first off, we don't know that 20 million would be the ceiling on the number of illegals. Because illegal aliens engage in document forgery the way most of us engage in breathing, it's entirely possible you could see millions of illegals pouring across the border, getting forged documents, and getting in on the deal -- and that's before the chain immigration starts that will bring in tens of millions more illegals to get in on the goodies Congress is ready to hand out with both hands.

But, let's say 20 million of these illegal aliens take advantage of the amnesty and get Z visas (By the way, despite what you may have heard from supporters of this bill, the moment the bill is signed into law, every illegal alien who was here before January 1, 2007 or who can acquire a forged document that says that he was, may be immediately eligible for a "probationary," i.e. permanent and infinitely renewable, Z visa).

First of all, hasn't one of the selling points of the pro-amnesty crowd been that illegals are manual laborers who are willing to do jobs that lazy Americans won't do? I believe it has. Well, there are a number of problems that will be caused by permanently bringing in 20 million foreign strawberry pickers and ditch diggers. The Z visa illegals themselves may not be eligible for government programs, but the moment they have an anchor baby, they can start leeching welfare, food stamps, and other government programs off of the American taxpayers. Also, the very fact that they have a child with American citizenship would make it that much more difficult to deport them if our politicians ever, by some miracle of God, get serious about enforcing our laws.

Moreover, consider this: if there's an economic downturn, and the labor market contracts, who will be the first people to get laid off? The low skilled, minimally educated, Spanish speaking Z visa holders. If you want to see the danger of that situation, look to France, where there is a staggeringly high unemployment rate among Muslim immigrants, legal and illegal, who live off the dole, join rape gangs, burn cars, riot, and have made swaths of France into no-go zones, even for the police in many cases. Think that it "couldn't happen here?" I bet that's what most Frenchmen would have told you 30 years ago.

On the other hand, let's say that these 20 million illegals become U.S. citizens. If anything, that would be an even worse situation for a variety of reasons. To begin with, Robert Rector has estimated that because we're talking about, for the most part, uneducated, manual laborers who will pay very little in taxes, the illegals are going to sponge 2.2 trillion dollars in government largesse from the rest of us over the course of their lifetimes. That means Social Security goes broke faster and we add more than two trillion dollars to our national debt to take care of people who weren't invited to this country, aren't wanted here by most people, and aren't even American citizens at the moment. How much sense does that make?

Like most Americans, I'm a compassionate person and I'm glad that we help feed the world, have helped stand up for freedom across the globe, and guarantee the security of nations like Taiwan and Israel from their hostile neighbors. But, compassion only goes so far. Asking the American people to carry 12-20 million illegal aliens on our backs, in our own country, isn't compassion; it's a shameless attempt to exploit the good nature of the American people.

Beyond that, Latinos went for the Democratic Party 70/30 in 2006. Expand those numbers out over 20 million people and you have 8 million new Democratic Party votes (which is 4 million more than George Bush's margin in 2004) -- and that is probably a very low estimate since we're mostly talking about poor people from socialist countries who don't respect America's laws and will have great difficulty improving their lot in America because of their limited English skills and lack of an education (If ever there was a group of people with "Democratic Party voter" written all over them, it's this batch of illegals).

Moreover, once those 20 million people become citizens and add their voice to the existing open borders lobby, we will never stop another amnesty because the former illegals are sure to demand that their representatives block any deportations or harsh enforcement of immigration laws. So, this isn't just a vote for another "amnesty," it's a vote for what will turn out to be a never ending string of amnesties that will continue until this country is dragged down to the point where it's not any nicer than the countries these people are fleeing.

Look at it this way: immigration is not a right, it's a privilege that is supposed to benefit the people who are already American citizens. That's part of the reason that America has always been a friendly country to immigrants. It's because we know that bringing in a small, but steady supply of ambitious foreigners to supplement our native population helps keep our country healthy, growing, and strong. The other reason Americans tend to like immigrants is because of a largely unspoken social contract: immigrants who come here are supposed to love this country, see it as a land of opportunity, and want to assimilate into our culture.

If you want to know why there has been such an explosive reaction to this wave of illegal immigrants, it's because none of the old rules of immigration are being followed. There are far too many illegal immigrants being allowed in and the illegals are a drain on our country, not a net benefit to the Americans who are already here. Furthermore, many of the illegal immigrants have bent over backwards to let us know that they don't love the U.S. and have no wish to assimilate. They wave foreign flags at illegal alien rallies, send much of their money to their home countries, and don't even bother to learn English.

So, even if this country did need to bring 12-20 million new people all in one fell swoop, which we most certainly don't, it wouldn't be the illegal aliens who are already here. We would want people from all over the globe, instead of a group of people who are resistant to assimilation because their first act here was breaking our laws, because of their sheer numbers, because they speak the same language, and because they are overwhelmingly from similar cultures.

Instead, we would want a much more diverse (and therefore more easy to assimilate) group of people from around the world, who respect our laws, and are willing to wait in line as opposed to what is by definition a criminal class that snuck into this country in the dead of night, forged documents, used fake social security numbers, and mock people who believe that our immigration laws should be taken seriously with their very presence in our country. Let me add to that by saying that, yes, we would want some people who do manual labor, but we'd also want plenty of engineers, rocket scientists, math teachers, doctors, and other professionals.

In short, the Senate immigration bill will do enormous damage to this country because it has it exactly backwards: it has turned immigration in this country into a right designed to primarily benefit people who come here illegally instead of an orderly, well maintained privilege that we grant to people who respect our laws so that they can help make our nation a better place to live for all of us.