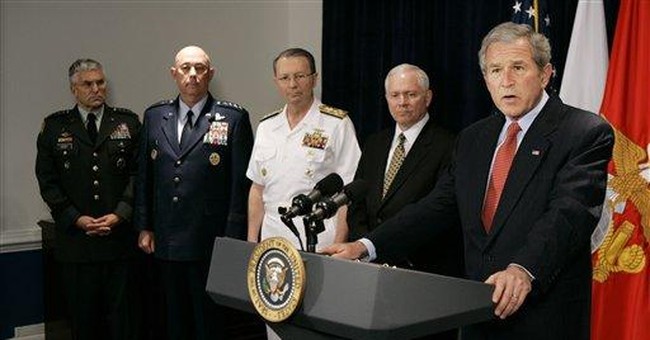 The title of this column is taken from Larry Elder's superb book Ten Things You Can't Say In America, even though we don't cover much of the same ground. Hopefully, Larry won't mind because imitation really is the sincerest form of flattery.

1) The U.S. military should be far less concerned about civilian casualties. We've gotten to the point where the United States is now regularly getting into conflicts with enemy nations that have far less regard for the lives of civilians in their countries than we do. We hold off on hitting high value targets because civilians are in the area and straitjacket our troops with rules of engagement that make it more likely they'll be killed. Meanwhile, the people we're fighting wear no uniforms and deliberately place military assets in areas full of civilians in order to use them as human shields. Yet, who gets blamed if the civilians are killed? Our troops, instead of the people who deliberately put innocents in danger.

Moreover, although we shouldn't be cavalier about taking the lives of civilians, safeguarding the lives of our soldiers and winning the wars we fight are more important than the civilian bodycount. It's better to lose foreign civilians than our soldiers and it's better to kill large numbers of civilians than lose a war. That's how we looked at it in World War II and it's how we should look at it today.

2) We would be better off if fewer people voted. We have fetishized voting in this country to the point where we've actually had serious proposals to make the vote into a lottery, where one lucky person will win a million dollars just for voting.

But the truth is, we'd be better off as a country if less people voted. For example, why in the world would we want to give felons or illegal immigrants the right to vote in elections (and yes, they do get to vote in parts of the country)?

On a different note, a Pew Research Poll in April of this month found that only 69% of Americans know that Dick Cheney is the sitting Vice-President. Honestly, if you don't even know who the Veep is, you're too uninformed to be voting.

The same goes for conspiracy theorists. According to a recent Rasmussen poll, 22% of Americans think George Bush knew about the 9/11 attacks in advance and 29% think the CIA was clued in. These people are too nuts to be voting.

Then there are people who have to get ballots in languages other than English. If you're an immigrant, you're supposed to learn English as a prerequisite of becoming an American and if you were born in this country, you should know how to speak English. So, who exactly are we supposed to be creating these ballots for?

Does this seem out-of-line? Suggesting that people who vote should be American citizens, non-felons, informed, not-crazy, and able to speak English if they're going to be voting? I don't think so. That's why if anything, we'd be better off encouraging people like that to stay home, instead of encouraging them to vote.

3) Men are better equipped than women to do certain jobs: Some jobs, like fireman, policeman, and soldier are better filled by men than women. That's because men on the whole are much more athletic than women as a whole. Sure, you can point to exceptions to the rule. There are plenty of men who are out of shape and there are some incredibly gifted women athletes who surpass the vast majority of the male population in physical skills.

But, when you're talking about people who are in reasonably good shape, 99 times out of a hundred, a man is going to be better able to carry someone out of a burning building, deal with a physically violent suspect, or carry 90 pounds of gear into combat better than a woman simply because he's bigger, stronger, and faster.

That doesn't mean women shouldn't be allowed to be firemen, policemen, or soldiers at all, but in the field, where superior athleticism may be the difference between life and death, we would be better served by having an all male police, fire, and military force.

4) Racism is not the biggest problem that black Americans face any more. Of course, racism does still exist and will always exist in one form or another. That being said, we've come a long way in this country from the time when black Americans couldn't use the same water fountain as white people, had to sit at the back of the bus, and weren’t allowed to go to the same schools as whites.

Today, Condi Rice is the Secretary of State, Barrack Obama is a serious contender for the presidency, and "a Time/CNN poll found 89 percent of black teens consider racism in their own lives to be "a small problem" or "not a problem at all."

On the other hand, the illegitimacy rate in the black community is roughly 70% and black on black crime is more dangerous to black Americans than the KKK ever was. Additionally, too many black Americans are trapped in failing schools and unfortunately, because black Americans monolithically vote Democratic, the Republican Party tends to write them off and Democrats take them for granted. Even Affirmative Action, which is ostensibly supposed to help black Americans cope with racism, has been a negative overall because it helps a relatively small number of black Americans, but taints the accomplishments of every successful black American ("Did he get the job because he's good at what he does or because of Affirmative Action?")

There's nothing wrong with fighting real racism, but if racism ceased to exist tomorrow, it wouldn't make a significant difference in the lives of most black Americans.

5)The only practical way to make peace between the Israelis and Palestinians is for the Israelis to transfer the Palestinians and take their land. There's a simple reason why the Israelis and Palestinians have never been able to reach a peace agreement: it's because the Palestinians are part of a sick, twisted, death cult. Their "nation" is run by terrorists who openly admit that their goal is to destroy Israel and the average person on the street is a monster who wants to kill Israelis more than he or she loves his own children. Speaking of the children in that country, before they can even stand on their own two feet, they're being taught that the grandest thing that they can ever do in life is blow themselves up and take some Israelis with them. No wonder the Israelis can't get along with these people. No one could. Imagine the family from the Texas Chainsaw Massacre times a few million and you have the sort of neighbors Israel has to deal with.

When our ancestors started dealing with Indians who massacred and tortured settlers, they either bought their land, took their land at the point of a gun, or just killed them all and took their land. Although genocide is no longer a morally acceptable choice, the Israelis would be perfectly justified in driving the Palestinians into the surrounding countries at gunpoint and taking their land. That would not be something the Israelis would relish doing and it would probably lead to another war between them and their neighbors, but the only other options are to allow the maniacs next door to continue to murder Israelis ad infinitum or for the Israelis to simply give up on having a state. Of the three options, transferring the Palestinians, bloody and troublesome though it may be, would seem to be the best choice.

Here's Why Democrats Are Optimistic About Their Latest Gun-Grabbing Scheme
Matt Vespa
Barack Obama Tweeted 'One of The Worst Tweets in History' Over Uvalde School Shooting
Rebecca Downs
What Is Wrong with Eric Swalwell?