10 More Differences Between Liberals And Conservatives 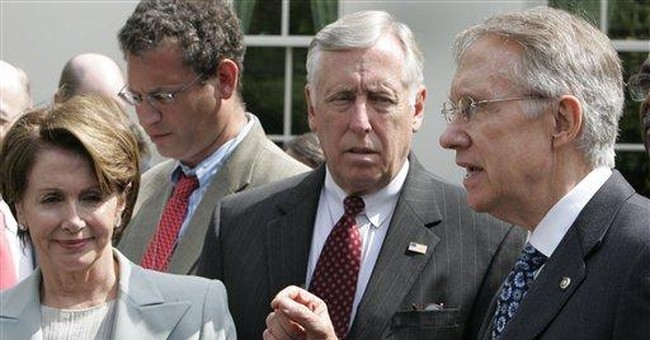 Last week, people seemed to really enjoy reading about 10 Differences between Conservatives And Liberals. So, this week, I thought it might be a good idea to point out 10 more issues about which conservatives are right and liberals are wrong.

10) Conservatives believe that the United Nations is a corrupt, anti-American, anti-Semitic talking shop that is largely hostile to American interests and is too incompetent to be much of use in areas where it's not. Liberals are internationalists who still have confidence in the UN. Moreover, they don't seem to be overly concerned about signing our country on to international schemes that are slanted against us, or about the fact that nations that are largely hostile to our interests like China, France, and Russia have a veto over any significant action that the UN can take.

9) Conservatives believe that marriage is one of the most crucial building blocks of a healthy society, and that anything that weakens the institution has the potential to do enormous harm to our country over the long haul. That's why we believe that marriage should be between a man and a woman. Liberals support gay marriage, and appear completely unconcerned about the long-term damage that glibly toying with something as important as marriage could do to our country.

8) Conservatives believe that companies should be taxed and regulated, but that the government has to be very cautious about adding new burdens on business. Businesses provide jobs, health care for many Americans, and enormous amounts of tax revenue, all of which could be jeopardized if we go overboard with taxes and regulations, thereby killing the goose that lays the golden eggs. Liberals, on the other hand, being socialists at heart, have seldom seen a tax, new regulation, or expense that they would hesitate to impose on businesses, despite the potential for damaging our economy.

7) Conservatives have kept an open mind about global warming, but we have seen little hard proof that mankind is responsible for the small, roughly 1 degree global temperature increase over the last century. Saying that it is "scientific consensus" that mankind is causing global warming means little when more than 17,100 American scientists disagree. Liberals want to impose massive regulatory schemes that would increase taxes, cost millions of jobs, and cause fuel prices to skyrocket even though most environmentalists acknowledge that Kyoto and the carbon credit trading schemes that have been put forth wouldn't make a huge dent in the amount of greenhouse gasses produced by mankind.

5) Conservatives may not be happy with how the war in Iraq has gone so far, but we believe that pulling out before the Iraqi government can defend itself from attack would lead to a nightmare scenario that has the potential to produce millions of dead Iraqis, a massive spike in worldwide oil costs, and an increase in terrorism after Al-Qaeda declares victory over the United States. Liberals understand the consequences for pulling out of Iraq too quickly just as well as conservatives, but they would prefer to see America lose the war in Iraq, despite the horrible consequences, because they believe it would benefit them politically.

4) Conservatives believe that the more distant the government gets from the constituents it serves, the worse it performs. That's why, if it's absolutely necessary that government become involved in an issue, it's usually better for state and local governments to become involved instead of the Federal Government.

3) Conservatives believe in keeping taxes low because when taxes get high, they stifle economic growth and expansion; because it's hard to justify giving the government more money when it wastes so much now, and because people should get to keep as much of their hard earned money as possible. Liberals prefer high taxes because it gives them more money that they can fritter away on big government programs and social engineering projects.

2) Conservatives believe that the market can better allocate resources than the government and that usually, when you see problems with the market -- for example gas shortages or the exploding cost of health care -- government interference with the workings of the market is at the root of it. Liberals have never seen a part of the economy that they wouldn't prefer to socialize and put under government control, despite the fact that anything run by the government tends to be far slower, more inefficient, and more expensive than anything run by private industry.

1) Conservatives believe that America has been and continues to be the greatest force for good in the world today. As a nation, we do more to promote freedom, help those who need it, and stand up for what's right than any other dozen nations combined. Liberals, on the other hand, always find a way to blame America first. Nobody, no enemy past, present, or future, will ever top American liberals when it comes to generating anti-American propaganda.