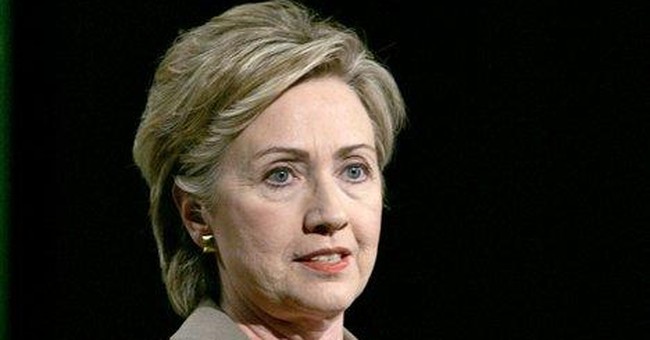 Many people assume that the Democrats' opposition to the war on terrorism and their unwavering determination to undercut the war in Iraq are solely an outgrowth of their dislike of George Bush. While Bush Derangement Syndrome and raw political considerations certainly are part of the problem, you've got to understand that the modern Democratic Party is simply no longer capable of dealing with a conflict like the war on terrorism because of the weird ideological tics of liberalism.

Look at how weak and helpless Jimmy Carter was when he was confronted by the Iranians. And Bill Clinton? Despite being prodded to take action time and time again by world events like the bombing of the World Trade Center, Saddam Hussein's attempted assassination of George Bush, Sr., the Khobar Towers bombing, the embassy bombings in Nairobi and Tanzania, the bombing of the USS Cole, along with India, Pakistan, and North Korea acquiring nuclear weapons under his watch, Clinton seemed incapable of dealing effectively with any serious foreign policy challenges.

That being said, if this nation were unfortunate enough to be burdened for four years with Barack Obama, John Edwards, Hillary Clinton or one of the other liberals contending for the Democratic nomination, things would be even worse this time around. Why would that be the case? There are a variety of reasons for it.

1) The Democratic insistence on treating the war on terrorism as a law enforcement issue will make it extremely difficult to deal with terrorist groups. When you have heavily armed terrorists ensconced in foreign nations, sometimes with the approval of their government, it's simply not practical to capture them, read them their rights, and take them back to America for trial. That is something that should be obvious after that approach was tried by Bill Clinton in the nineties and it failed to produce results. Going back to it in the post 9/11 world, which is what the Democrats want to do, is nothing but an invitation to catastrophe.

2) Ronald Reagan once said that, "Of the four wars in my lifetime, none came about because the U.S. was too strong." Conversely, a super power that seems weak invites attack. After spending the last six years railing against the Bush Administration and fighting tooth and nail against almost every measure that makes it tougher on the terrorists, a Democratic victory in 2008 would be viewed by the world as nothing less than an American capitulation in the war on terror. This would encourage the terrorists to launch more attacks and cause our allies in the fight to lose heart.

3) When the only credible Democratic voice on national security in the Senate, Joe Lieberman, was defeated in the Democratic primary last year, the message sent to Democrats was, "Being serious about defending America may cost you your job." After that, elected Democrats became even more reluctant to stand up against terrorism, which is really saying something, since the Democratic Party has been nothing but a hindrance in the war on terrorism since they voted en masse for the war in Afghanistan.

4) The Democratic base doesn't take terrorism seriously and considers it to be nothing more than a distraction from socializing the economy, raising taxes, promoting gay marriage, and the other domestic issues that are near and dear to the heart of liberals. It's old hat to hear Democrats say that they think global warming is more dangerous than terrorism, but at one point in 2006, 94% of the readers at the most popular liberal blog on earth, the Daily Kos, were actually saying that they thought that corporate media consolidation was a greater threat than terrorism. If you have a Democratic base that isn't serious about fighting terrorism -- and it isn't -- you will have a Democratic President that isn't serious about fighting terrorism.

5) Using the American military to further the interests of our country makes liberals uncomfortable, even though they're usually happy to send the troops gallivanting off to the latest godforsaken hotspot that has caught the eye of liberal activists. That's why many Democrats, like Hillary Clinton, who oppose winning the war in Iraq, are all for using our military in Sudan. However, it is also why those same liberals will oppose using our military to tackle terrorists abroad except in Afghanistan, where it would be politically damaging for them to call for a pull-out.

6) When the U.N. Security Council has members like China, France, and Russia that seem to be financially in bed with every country we end up at loggerheads with, the UN is going to be even more hapless and ineffective than normal. Since the Democrats are so hung up on getting UN approval for everything we do, it will be practically impossible for them to move forward on any serious, large scale foreign policy enterprise.

7) The Democrats are overly concerned with "international opinion," AKA "European opinion." The Europeans have mediocre militaries, pacifistic populations, fetishize international law, and have extremely inflated views of their own importance. Other than Britain, they don't have much to offer in a military conflict, yet even getting token forces from them that are minimally useful is like pulling teeth. Getting large numbers of European nations to cooperate with us on military ventures that are important to American security will be nearly impossible at this point -- yet since Democrats place a higher priority on European approval than our national security, they will insist on it. This, combined with the logjam at the UN, would hamstring any Democratic President.

8) The Democrats want to close Guantanamo Bay and put the terrorists held there into the American court system. The justice system in the United States is simply not designed to deal with and interrogate terrorists or enemy fighters captured overseas by our troops. Putting the terrorists held at Gitmo into our court system would only mean that hundreds of terrorists would be freed on technicalities because it's not advisable to reveal intelligence methods -- or because our soldiers aren't trained in the legal niceties that are necessary for policemen, but should be irrelevant in a war zone. How absurd would it be to catch a Taliban fighter entering Afghanistan, take him back to the United States, have him released by a liberal judge, and then dropped back off on the Afghan border where he'd be back shooting at our troops the next day? If a Democrat wins in 2008, we will get to find out all about it first hand.

9) The intelligence programs that have helped prevent another 9/11 would be curtailed under a Democratic President. As a general rule, Democrats favor weakening our military and intelligence agencies. Add to that the complete hysteria we've seen from liberals over programs like the Patriot Act and the NSA tapping calls from terrorists overseas to people in the U.S. Under a Democratic President, we would be sure to see our intelligence agencies systematically stripped of the powers they need to detect and foil terrorist plots.

If a Democrat were to win in 2008, it would give terrorists worldwide a four year respite to rebuild, reload, and run wild without serious opposition from the United States. The price our nation and our allies would pay in blood and treasure for that mistake would be incalculable.