Conservative Case for Duncan Hunter In 2008 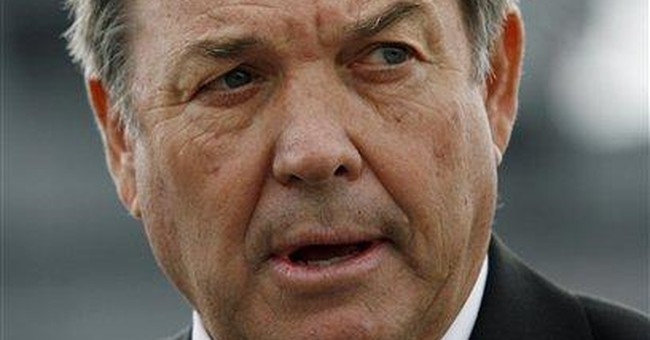 If you're looking for someone who can represent the conservative wing of the Republican Party in 2008, California Congressman Duncan Hunter fills that bill far better that any of the top contenders who have already gotten into the race. Here's a short, but sweet primer that may help explain why that's the case.

He Is The "National Security Candidate."

If you're looking for a candidate with credibility on national security issues, Duncan Hunter is your guy. Hunter is a hawkish, former Vietnam veteran who "served in the 173rd Airborne and 75th Army Rangers" and earned a Bronze Star. His son also served two tours in Iraq as a Marine, so we're talking about a guy who has had "skin in the game" over in Mesopotamia. Additionally, Hunter served on the House Armed Services Committee and rose to the rank of Chairman before the Democrat takeover in 2006.

So, when it comes to foreign policy issues like Iraq, we're talking about a candidate who oozes credibility. But, has he done an about face on Iraq now that the polls are against it? No, he strongly supports the surge and he had this to say about how he views the war in Iraq when I interviewed him back in December:

"Well, the U.S. is following in the same basic pattern that we've followed for 60 years in expanding freedom around the world. (The first step is) that we stand up a free government and we've done that in Iraq.

The second step is we stand up a military capable of protecting that government and the third step is the U.S. leaves. We followed that pattern in Japan and the Philippines and Salvadore and our own hemisphere and it's been the traditional and the effective method of this country spreading freedom around the world."

In my opinion, that's probably a better, simple explanation of what we're doing than George Bush has given in the last couple of years.

Duncan Hunter has been one of the Republican House leaders in the fight against illegal immigration. Not only is Hunter the primary mover and shaker behind the San Diego border fence, he "wrote the Secure Fence Act" which George Bush signed into law in late October of last year.

Yet, Hunter has managed to avoid some of the harsh rhetoric that sometimes gets other tough-on-illegal-immigration pols in trouble. For example, in our interview last year, Hunter emphasized how important it is to get a fence up in order to prevent illegal immigrants from being killed as they cross the border:

"The first piece is that the major part of the fence is to be built between Calexico, California and Douglas, Arizona and that portion, that's 392 miles, that's the area through which most of the people come who have died of dehydration or sunstroke in the desert sun in the summer months.

So one provision that we put in there is that we have to have at least interlocking cameras...before the hot season, so there's a humanitarian dimension to this and that's something that's been missed by many of the liberals."

His Trade Position May Be a "Bug" To Republicans, But It Can Be A "Feature" To Democrats

There is one area in particular where Duncan Hunter departs from the conservative orthodoxy and that's on trade issues. He's neither a fan of free trade agreements like NAFTA and CAFTA, nor does he think we're getting a square deal on trade from China.

Although many Republicans will disagree with Hunter on this issue, many Democrats find themselves nodding their heads in agreement with what he has to say. In important electoral-vote-rich states like Ohio, Michigan, and Pennsylvania, Hunter's message will resonate with working class Democrats who might not otherwise vote Republican. That could be the crucial factor that swings an election in our favor in 2008.

All This And He's Socially Conservative, Too

There have been a lot of complaints that the two front-runners for the GOP nomination, John McCain and Rudy Giuliani, have little to offer to social conservatives who are going to have to turn out in 2008 if the GOP has a chance to win.

On the other hand, Duncan Hunter is opposed to gay marriage, staunchly anti-abortion, and should have no problem appealing to conservative Christians. As a matter of fact, Hunter has even introduced the, "Right to Life Act (which) specifically acknowledges the personhood of the unborn." Hunter says that bill, if passed, "would allow us to have a reversal of the effects of Roe v. Wade without a constitutional amendment."

He Has Lots Of Mileage, But No Heavy Baggage

One of the things that's becoming apparent about the top contenders in the race for the Republican nomination is that all of them have some extremely heavy baggage. We've got divorces, adulterers galore, candidates whom much of the party won't support for one reason or another, a candidate who will be 72 in 2008, and another one, who, unfortunately, may lose a considerable amount of support because of his religious beliefs. Now, Hunter? He has been married once, has no significant scandals to live down, and there don't appear to be any other major minuses that will cost him a few percentage points at election time. Could he have some scandal in his closet that we know nothing about? Maybe, but that's the case with any politician. At the moment, he looks very good on this front compared to the top contenders.

Furthermore, Duncan Hunter was first elected to Congress back in 1980. In a post 9/11 world, a Vietnam vet with 25+ years of experience in government makes a nice contrast to the trio of lightweights who are fighting for the Democrat nomination (Obama, 2 years in the Senate, Edwards, 6 years in the Senate, and Clinton, 6 years in the Senate). If there were another 9/11, with whom would you feel more comfortable in the Oval Office, John Edwards, who'd probably curl up in the fetal position under his desk, or a guy like Duncan Hunter, who has been around the block a few times?

To Know Him Is To Love Him, Or At Least To Like Him Better Than McCain

When you're taking a look at a 2nd tier candidate like Duncan Hunter, who has minimal name recognition at the national level, the first thing most people will think is, "Good, bad, it doesn't matter if he can't capture the nomination." That's a fair point. But, there have been a couple of indications that Hunter has what it takes to catch on.

The first was a mid-January "straw poll of Republican precinct committeemen" in Maricopa County, Arizona. Hunter took first place. He also did surprisingly well, given his lack of name recognition, in a poll of right-of-center bloggers. In that poll, Hunter drew the fourth highest level of support and when the level of opposition to each candidate was subtracted from that person’s support, Hunter actually came in second place.

Notice that in both cases, you have two groups of extremely well informed, conservative participants, that are probably several months ahead of the general public in knowledge about the candidates and in both cases, Hunter did very well. That's a strong indication that if Hunter can get his name out there, he can compete with the top tier candidates in the race.

Granted, it's a little too early to endorse any candidate, Duncan Hunter included. After all, we don't know all the candidates that will be running yet and they haven't even had the first debate.

Moreover, there are a lot of different positions that many of the candidates have yet to take a stance on one way or the other. For example, there are 2nd Amendment issues. Hunter is "near perfect" there. A Balanced Budget Amendment? He supports it. What sort of judges would candidates appoint to the bench? Hunter would prefer someone like Scalia. Pardoning Border Patrol agents Ignacio Ramos and Jose Compean? Hunter thinks that is the right thing to do. School vouchers, the missile defense shield, a 2/3 majority in Congress to raise taxes? Hunter is in favor of all of them.

Does that mean other candidates won't end up taking those same positions? No. Does it mean Hunter is perfect? No. But, when you compare Duncan Hunter to everyone else in the race right now, he looks very appealing. In the end, maybe that won't matter because Hunter won't get any traction, but I, for one, hope that conservatives will take a good, long look at Hunter before they make a decision on which candidate to support in 2008.