The war on terror and the campaign of 2008 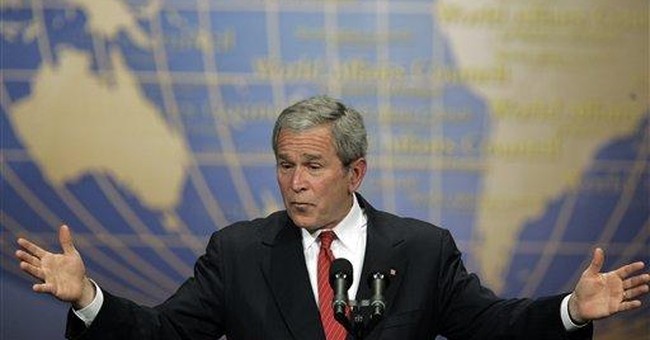 In a presidential campaign where not all of the Democratic candidates in the competition believe that a War on Terrorism actually exists, the efforts of conservative organizations such as Townhall.com will be critical to the ongoing debate about how our nation can defeat the terrorists who threaten us throughout the world. After a week in which Harry Reid said that the war in Iraq is lost, an article in the Washington Post on April 30th cited the efforts of Townhall.com in encouraging our elected leaders to stay on the offensive in the war on terror.

The article stated that “Activists on both sides of the impasse are mobilizing against compromise [in the war in Iraq]…the conservative Web site Townhall.com has launched a pressure campaign with petitions and call-in efforts to lawmakers and talk radio, encouraging policymakers to ‘stay the course on the war on terror’.” While many politicians are floundering on this issue and offering criticisms where ideas are warranted, Townhall.com is standing up to encourage politicians to stay on the offense in the War on Terrorism, which began before the War in Iraq started and will continue after that war is ended.

In the Democratic debate last week, the candidates on stage spent their time criticizing the Bush administration and its mistakes without offering much in the form of ideas for how the United States can continue to wage the war on terror and defend itself against our enemies. Our country must continue to be vigilant against the ongoing terrorist threat and we must improve our intelligence capabilities to understand and prepare for the threats that our nation faces. However, instead of talking about such ideas, the Democrats spent their time on stage last week not talking such plans for the future. They just continued to criticize the president and the past without bringing any new solutions or ideas to the table.

That is not true leadership. Nor will such rhetoric protect this country against future terrorist attacks.

The best the Democrats could muster in response was challenging “Giuliani's contention that their party cannot keep the country safe and [they] accused him of attempting to divide the nation over what many consider the paramount issue of the coming campaign.”

However, during the Democratic debate, none of the first-tier, second-tier candidates… or even Dennis Kucinich…spoke much about how they would fight and win the war on terrorism. Even though Osama Bin Laden’s terrorist network was active during the Clinton administration causing much death and destruction throughout the world during that time-- the candidates made it seem like the war on terrorism began and ended in Iraq -- a misjudgment that would definitely put our country back on the defensive if one of these Democrats is elected to the Oval Office.

A few days ago, the Republican presidential candidates had a chance to debate in their very first televised debate of the season where they each had a chance to talk about where they stand in the war on terrorism and what they will do to continue to fight against the threats that our nation faces. The Republican debate focused a lot more on ideas for the future and a lot less on criticisms of the past.

Until the next President of the United States is elected in November of 2008 and the Bush-haters have nobody to openly loathe, Democrats will continue to mobilize with organizations like MoveOn.org and with leaders like Senate Majority Leader Harry Reid who said that the war in Iraq is already lost. If the Democrats keep with recent trends, they will continue to offer little to the national debate about how our country can keep itself safe from those who wish to attack us.

Republicans, independents and moderate Democrats alike must continue to use organizations like Townhall.com to encourage our nation’s leaders to stay on course in fighting the war on terrorism and never allow our country to fall back into a defensive position again. They must continue to demand real solutions and real ideas from our presidential contenders, even though one political party seems reluctant to provide such solutions.