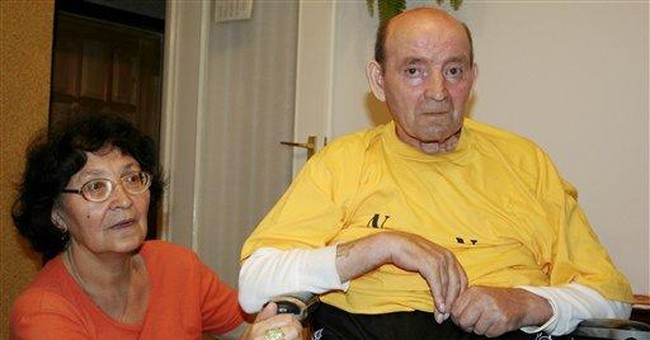 Rip Van Winkle has nothing on Jan Grzebski, a Polish railway worker who just emerged from a coma that began 19 years ago--just prior to the collapse of communism in his country. His take on how the world around him has changed beyond recognition comes at an appropriate time. It was 20 years ago tomorrow that Ronald Reagan electrified millions behind the Iron Curtain by standing in front of the Berlin Wall demanding: "Mr. Gorbachev, tear down this wall!"

Mr. Grzebski is, of course, thrilled to see the wife who cared for him and the 11 grandchildren he didn't even know he had. But he is also shocked at how his homeland has changed. "When I went into a coma, there was only tea and vinegar in the shops, meat was rationed, and huge gas lines were everywhere," he told Polish TV. "Now I see people on the streets with cell phones and there are so many goods in the shops it makes my head spin. What amazes me is all these people who walk around with their mobile phones and never stop moaning. I've got nothing to complain about."

His real-life story could have been taken from the plot of "Goodbye Lenin!," a popular 2003 German film in which a teenager desperately tries to hide the fall of communism in East Germany from his mother, a party loyalist, to prevent her from dying of shock as she recovers from a coma.

While the Cold War may be a topic of cinematic bemusement, it also remains serious business for those who will gather for two events this week on opposite ends of the country. Tomorrow the Young America's Foundation will hold a conference on the Berlin Wall's collapse at the Reagan Ranch in California with Peter Robinson, a Reagan speechwriter. On the same day in Washington the official Victims of Communism Memorial (www.victimsofcommunism.org) is to be dedicated.

The memorial is a 10-foot bronze replica of the "Goddess of Liberty" statue, which Chinese dissidents erected in Tiananmen Square before tanks crushed both it and their movement in 1989. The statue's inscriptions will both mourn the "more than 100 million victims of Communism" and call for the freedom of "all captive nations and peoples." Marking the bipartisan nature of the U.S. effort during the Cold War, the site on Capitol Hill was donated through a bill signed by President Clinton, and the keynote address will be made by Democrat Tom Lantos, chairman of the House Foreign Affairs Committee and a native of Hungary who escaped the Holocaust thanks to Swedish diplomat Raoul Wallenberg.

Several participants in the ceremony come from Eastern Europe, which is marking the communist period with the opening of new museums in Berlin and Budapest. They are thrilled that one of the most popular current films in Europe is "The Lives of Others," a psychological secret-police thriller by first-time director Florian Henckel von Donnersmarck. In February it won the Academy Award for Best Foreign Language film.

The movie, set in East Berlin in 1984, tells the story of how the Stasi, the feared secret police, spies on and ruins the lives of an actor and actress. Whereas Hitler's Gestapo policed 80 million Germans with 40,000 employees, the Stasi kept 17 million people in line with some 100,000 intelligence officers. In addition, it employed 1.5 million informers, which meant every seventh adult was submitting reports on friends, colleagues and even spouses.

The movie is a tour de force and is now showing in select U.S. cities. Columnist William F. Buckley, himself the author of a book on the Berlin Wall, saw it last month and wrote that "the tension mounts to heart-stopping pitch and I felt the impulse to rush out into the street and drag passersby in to watch the story unfold." After watching the film, Mr. Buckley turned to his companion and simply said, "I think that is the best movie I ever saw."

The film itself signals some of the reasons for why communism was in crisis in the 1980s. Official corruption had reached stultifying levels. The technological revolution threatened to leave centrally planned economies permanently behind. And, as columnist John O'Sullivan has noted, "Communism had failed to retain enough true believers who would murder on its behalf."

In East Germany, the party bosses delayed reforms, allowing anger among their own citizens to build until, by 1989, a full 5% of East German adults had taken the risk of being branded disloyal by requesting exit visas. That summer Hungary began allowing East German tourists to slip through to the West, and the genie was out of the bottle. Yet even toward the end the experts thought Marxism-Leninism would stay in place. Many citizens thought so too. "Most Germans themselves are convinced that the prospect of a single Germany is a fantasy," wrote journalist Peter Wyden weeks before the wall fell.

For different reasons, history will record two paramount figures who helped sweep communism into the ash heap of history: Ronald Reagan and Mikhail Gorbachev. Reagan first saw the Berlin Wall in 1978, when he told his aide Peter Hannaford, "We've got to find a way to knock this thing down." After Reagan became president, he returned in 1982 and enraged the Soviets by taking a couple of ceremonial steps across a painted border line. Then, in 1987, he overruled his own State Department by giving the momentous speech in which he implored the general secretary directly to tear down the wall.

Reagan liked to refer in his speeches to the "tide of history," and that idea must have been on Mr. Gorbachev's mind two years later when he visited East Berlin and informed the comrades there that they needed to change. He told reporters who asked about the wall, "Dangers await only those who do not react to life." The signal was sent that Moscow would no longer prop up a corrupt system.

The Berlin Wall's fall was both a vindication of the West's refusal to kowtow to the Soviets and a tribute to the spirit of dissenters behind the Iron Curtain. Today pieces of the wall exist as mere souvenirs on mantelpieces. Sadly, today Russia itself is slipping back into authoritarianism.

It shouldn't surprise anyone that Russia has resisted efforts to erect memorials about the communist era. In 2005, Vladimir Putin, Russia's autocratic president, let slip in a speech that "the collapse of the Soviet Union was the greatest geopolitical catastrophe of the century." Under Mr. Putin's leadership, Russian officials are conspicuously re-creating some of the institutions of oppression. Their frosty silence about three-quarters of a century of communist oppression does not augur well for Russia's future.