Paul Ryan Is Trying to Lose in November

John Dempsey  |  Jun 08, 2018
The opinions expressed by columnists are their own and do not necessarily represent the views of Townhall.com.
Top Columns
Trending on Townhall Media 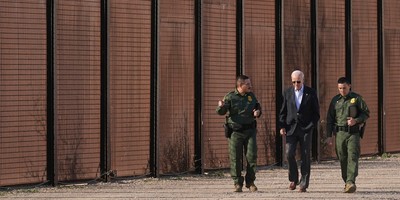 Don’t fool yourself. Paul Ryan, the House Speaker, doesn’t like President Trump. And he has great disdain for voters who put him in the White House. Ryan was openly against Trump during the nomination process. After Trump became the candidate, he still experienced pushback from Ryan. The political establishment agreed with Ryan. Now, Ryan is retiring from his Speakership position and leaving the House after this term, but not before he can flip the middle finger to Trump and his supporters.

Trump was able to find his way into 1600 Pennsylvania Avenue because of his hardline stance on illegal immigration. Americans were tired of low wages due to illegal aliens who were working for minimum wage, and sometimes less. Trump wisely brought this issue to the forefront.

Now, Paul Ryan is quickly writing an amnesty bill that he hopes to bring to the House floor for debate. He is trying to divide the Republican Party between the establishment and Conservatives. Ryan doesn’t gain anything politically, and he has nothing to lose. A politician at the end of their term is more dangerous than drinking Mexican tap water.

It’s no secret that Ryan hates Trump. The economic numbers are high. Trump is on his way to another term if the economy keeps going in this direction. Ryan doesn’t want to help push the Trump agenda, and that is why he’s leaving. However, he can help slow or stop it.

The best way to put a stalwart on Trump's agenda is to lose at least one of the chambers in November. If Ryan can help make that happen, he will get the last word. This will be a thumb in the eye of the president, and the voters that put him in office. Ryan is writing the amnesty bill to be vindictive.

Republicans are moving into a strong position for the midterms. The Democrat “blue wave” appears to have lost a lot of momentum, if it had any at all. This is not the time to push a controversial subject. This political move is full of malice.

Senate Majority Leader Mitch McConnell said this week there was no chance the Senate was going to address immigration this year, so why write the bill? By now, you should know why.

Putting amnesty on the floor for a vote is a sure fire way to lose voters enthusiasm.

Ryan is placing cheap labor over American labor. His actions are a way to set himself up to line his pockets down the road. Either way, you look at what he is doing, it is about Paul Ryan.

American’s wages are going up under Trump. There are more job opportunities. Democrats have no rebuttal. All they can do is mindlessly yell “impeach 45.” As the days go on, it is becoming clearer that Republicans have a shot to hold and grow Congress. If the conservatives in the House don’t push back on Ryan, Republicans will lose one of the chambers.

When Ryan is finally gone, a real conservative needs to be the speaker. Not Paul Ryan 2.0.