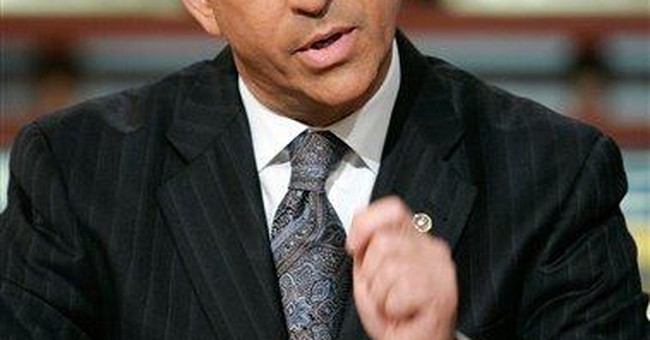 Seven months have passed since I handed the gavel to Nancy Pelosi, formally returning control of the House to Democrats for the first time in 12 years. In my remarks to the House that day, I offered a bit of advice to the members of the incoming majority. I told them:

“The [American] people don’t care which party controls it; what they want is a government that is limited, honest, accountable, and responsive to their needs. The moment a majority forgets this lesson, it begins writing itself a ticket to minority status.”

My friends: the Democrats’ ticket is being punched.

The stolen 215-213 vote Thursday night on the Republican motion denying taxpayer benefits to illegal immigrants could be the legislative equivalent of the “shot heard ’round the world.” This was about far more than just arcane parliamentary process. It was an act I believe will eventually come to symbolize this majority.

In a fateful moment that capped off seven straight months of cynical broken promises, the current leadership thumbed its collective nose at the will of the American people. In one telling instant that has now been viewed by millions of our constituents via the Internet and other means, the Democratic majority revealed it is willing to break any rule, trample on any precedent, and run roughshod over its own Members to defend a left-wing, big government agenda most Americans utterly reject. Then it compounded the gesture on the House floor by stifling Republican efforts to debate the majority’s handling of the incident, and erasing the evidence of its iron-fisted actions from the public record, much as it did with the 215-213 vote itself.

The stolen 215-213 vote wasn’t about us. It was a breach of trust between the Democratic majority and the American people the current majority swore it would work in an open, bipartisan, accountable manner to serve.

The severity of this breach hasn’t occurred to every Democrat yet. As this morning’s Washington Post revealed, there is disagreement within the Democratic leadership ranks as to whether Thursday night’s stolen vote action was even a mistake at all. Majority Leader Hoyer acknowledged on the floor that it was a mistake, and apologized. But Speaker Pelosi brushed Leader Hoyer’s comments aside, saying there was no mistake, and calling the incident something that was just an “inconvenience” for the Republican minority.

Leader Hoyer has it right. It was a mistake – a mistake that will grow in infamy with each day the Democratic leadership allows it to stand. The stolen vote wasn’t just “inconvenient” for Republican politicians; it was an affront to the millions of Americans we were representing when we offered legislation to stop the Democratic majority from allowing taxpayer dollars to go to individuals who violate the laws of our country.

When we held our retreat in Cambridge back in January, we vowed to use our time in the wilderness of the minority to reconnect with the principles that unite us as a party and have broad appeal with the American people. We vowed to present the American people with a clear choice. There is no question we’ve made progress toward this difficult goal.

Our unity has aided us immensely in this process. The past seven months have been a humbling experience for us all; we’ve gone through it together. But it’s also been a healing experience. We’ve acknowledged mistakes that contributed to the loss of our majority, and vowed to hold ourselves to a higher standard. We’ve agreed Republicans must work together for a new and better American future, based on security and freedom – principles that unite all House Republicans and define us as a party. We’ve learned to listen more closely to each other, and to listen more closely to our constituents. We’ve agreed on the need to return to our core principles, and the need for restored trust between the American people and their elected leaders.

We’ve also been effective – “unusually effective,” to borrow the term used recently by Fred Barnes of the Weekly Standard. Sticking together, we’ve forced the majority to deal with us and acknowledge the views of the millions of Americans we represent.

Unprecedented Floor Victories. We’ve successfully passed 15 Republican motions-to-recommit – 16 if you count the immigration vote stolen Thursday night – leaving our imprint on many of the major bills brought to the floor by the Democratic leadership. That’s more than House Democrats passed during the entire 12 years in which they were in the minority. Protecting Americans at Home and Abroad. Led by our colleagues Pete Hoekstra (R-MI) and Heather Wilson (R-NM), we insisted that the Democrats work with us to pass legislation closing the terrorist loophole in the Foreign Intelligence Surveillance Act (FISA) – and it now appears we’ve won. Similarly, led by Peter King (R-NY) and Steve Pearce (R-NM), we forced the Democratic leadership to pass the “flying Imams” legislation ensuring Americans can’t be hauled into court for responsibly reporting suspicious activity. Fighting for Fiscal Responsibility. We forced the Democratic leadership to restore transparency requirements for appropriations earmarks, restoring GOP reforms that allow earmarks in appropriations bills to be challenged openly on the House floor. We lined up against the largest tax increase in American history, and vowed to support President Bush when he vetoes any spending bill that threatens the goal of a balanced budget by 2012. Supporting Our Generals and Our Troops. We stopped the Democrats’ “slow bleed” plan to cut off funding for American troops in Iraq, giving General Petraeus and the brave men and women of our armed forces the chance they deserve to implement Operation Phantom Thunder and defeat al Qaeda. Broken Promises in the House of Hypocrisy We have also been aided in this process by the Democrats themselves. For seven months, the current majority has had the opportunity to use its power to do great things for the American people. That opportunity has been utterly and tragically squandered. Instead of doing great things, the Democrats took actions that made all of us look small.

They stuck pork-barrel spending for peanuts and spinach on a bill meant to fund American troops in harm’s way.

They created slush funds for secret earmarks, attempting to spend billions of taxpayer dollars without transparency.

They jammed “green pork” accounts into the energy tax bill, allowing taxpayer funds to be used to subsidize things like Lexus Hybrids in Beverly Hills and putting copies of Al Gore’s book in children’s classrooms.

They voted to look the other way when the Speaker’s own choice for majority leader broke House rules by threatening a Republican member who dared to challenge an illegitimate earmark.

They stonewalled lobbying reforms that require lobbyists to disclose taxpayer-funded earmarks for which they’re lobbying Congress, repealed Republican reforms requiring earmarks in tax and authorizing to be publicly disclosed and subject to challenge on the House floor, and killed legislation requiring taxpayer-funded state and local government lobbyists from following the congressional gift ban as they lobby for pork.

They trumpeted passage of a lobbying reform bill largely indistinguishable from the one Republicans passed through the House last year – the bill Democratic leaders condemned at the time as a “sham.”

They Abused the Rules to Give Illegal Immigrants Your Money. Without so much as a hearing, Democratic leaders rammed a bill through the House that cuts seniors’ Medicare benefits and raises taxes to expand government-run health care that illegal immigrants can receive. They silenced Republicans who rose to object to the process by which this irresponsible legislation was brought to the floor. Then they overturned the 215-213 vote.

They Abused the Rules to Raise Taxes and Gas Prices. To pay for new spending in the farm bill, Democratic leaders attached a surprise tax hike to it – with no debate and no committee consideration – on the day before it hit the floor. The tax hike threatens more than five million American jobs. A week later, they rammed energy legislation through the House that raises not only taxes, but gas prices, too – just so they could say they passed an energy bill.

They Abused the Rules to Leave Our People More Vulnerable to Attack at Home and Abroad. Six months ago, Majority Leader Hoyer promised me on NBC’s “Meet the Press” that Republicans would be given a vote on legislation by Rep. Sam Johnson (R-TX) barring Congress from cutting off funding for American troops in harm’s way. Six months have passed. There has been no vote. Instead we spent hours this month debating meaningless Iraq bills that everyone knew were going nowhere, and many Democrats themselves didn’t even believe in.

August and Beyond We must use August to talk to our constituents about these matters – not for the purpose of making them more cynical, but to make certain every American realizes what is at stake.

That there are devastating consequences for American families and small business owners when Democrats control Congress. Our freedom and security are at risk, subjected to death by a thousand cuts by a legislature that believes the answers to our problems lie in bigger government and higher taxes. An undeclared war on American jobs is being waged. The size and scope of the federal government is being expanded by reaching into the pockets of hard-working American families and taking more of their money.

We know we can’t solve Americans’ challenges in health care, retirement security, and education by taking more of their money and limiting their freedom. When we return in September, House Republicans will resume our task of building a new and better future through freedom and security, not bigger government.

It is my honor and privilege to serve as your Leader. I truly believe our team has never been stronger. And if we continue to rebuild and recommit ourselves to the principles of smaller, more accountable government that define our cause, we will not only earn back our majority; we’ll also do great things together for the American people once we’ve got it.

On behalf of myself and your entire leadership team – Roy, Adam, Thaddeus, Kay, Judge, Tom, Eric, and David – I wish you a safe and happy August. God bless you, your family, and the people you represent.