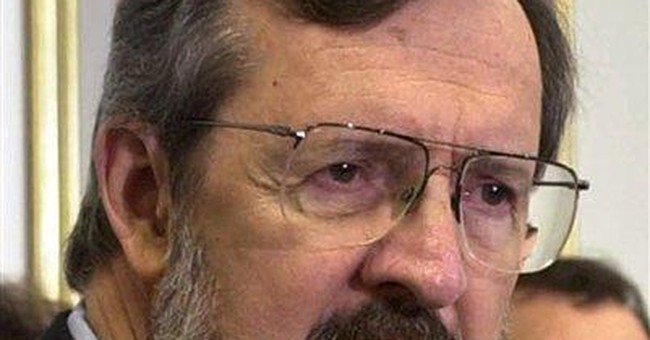 WASHINGTON - House Republicans banded together this week to force Democrats to restore GOP earmark reforms that brought real transparency and accountability to the budget process.

Faced with a united Republican Conference, the Democratic leadership backed down on their plan to hide earmarks in a series of multi-billion dollar slush funds and, effective immediately, agreed to allow Republicans to challenge wasteful spending in appropriations bills on the House floor.

As part of the deal completed after extensive negotiations that ended late today, Republicans agreed to allow two appropriations bills (Homeland Security and Military Quality of Life) - bills that include few or no earmarks - to move forward immediately. All 10 remaining appropriations bills will come to the floor later with their earmarks fully disclosed and subject to challenge by any lawmaker - a key element of the 2006 GOP reforms.

The issue of transparency and accountability in government spending has been at the forefront of congressional action all year. In January the majority approved a conveniently-flawed rules package that made it harder than ever to identify earmarks tucked quietly into spending bills and all but impossible to remove them.

The rules allowed the majority to declare legislation loaded with millions of dollars in earmarks as "earmark free" - a process exploited by Rep. John Murtha, D-PA, to secure passage of an illegitimate taxpayer-funded earmark in a bill meant to fund our intelligence activities, over the vehement objections of House Republicans.

As time wore on, the majority abandoned any pretense of fiscal responsibility and purposely wasted time on veto-bait legislation that never had any chance of becoming law. Rather than getting the appropriations process moving, they focused all of their energies on undermining our troops.

Then came a decision by Appropriations Committee Chairman David Obey, D-WI, to not only make all earmarks secret, but to replace them in Democratic spending bills with multi-billion dollar slush funds - blank spots to be filled in at a later date, all hidden from serious public scrutiny.

Obey planned to keep the earmark requests secret to allow himself more time to review them all personally - a bizarre process for the most "open" and "honest" Congress. Obey said he would eventually print each earmark request in the Congressional Record - but only after the House voted on its appropriations bills. Obey said lawmakers could write to him individually about specific projects and express their concerns. but that's not accountability; that's a complaints department.

My colleagues and I warned Democratic leaders that if they insisted on bringing their appropriations bills to the floor under Obey's plan, Republicans would fight back. When the first of their spending bills came up earlier this week on Tuesday they ignored the warning. That's when Republicans went on offense.

We relentlessly highlighted Democrats' broken promises on earmark reform, and assailed the majority for gutting Republican reforms that give each lawmaker the right to challenge individual earmarks on the House floor. Less than two days later, Democrats capitulated.

This was a team effort -- plain and simple. Everyone from Rep. Jeb Hensarling, R-TX, and the Republican Study Committee to Rep. Paul Ryan, R-WI, and his budget committee team; from Rep. Jerry Lewis, R-CA, and his appropriations team to our leadership and everyone in between -- we won this by sticking together. Of course, we also had some help from the outside - notably the "Porkbusters" coalition that rallied taxpayers across the country to sign a letter offering to help Obey and House Democrats review their secret earmarks.

While this victory is good news for taxpayers, Republicans will continue the fight until the rest of our 2006 reforms are restored. I have introduced a resolution that would fully restore those reforms by allowing earmarks in tax and authorizing bills to be challenged, and Republicans will file a discharge petition to force it to a vote on the floor if necessary.

When I first ran for Congress, I told the people of my district that if they wanted a Member of Congress who would go to Washington to raid the federal Treasury on their behalf, they should not vote for me. I believe we need fewer earmarks in Congress, and I believe we need an earmark process that is open and accountable to the taxpayers whose money Congress spends.

Of course, if Democrats fail to live up to their promises and to the agreement they made with me and my colleagues they know what's in store: a united Republican Conference that will be back on the House floor highlighting their secret earmarks once again.

Francis Collins: Children Under 12 Wearing Masks is 'Really Smart Thing to Do' and 'Sacrifice Worth Making
Rebecca Downs