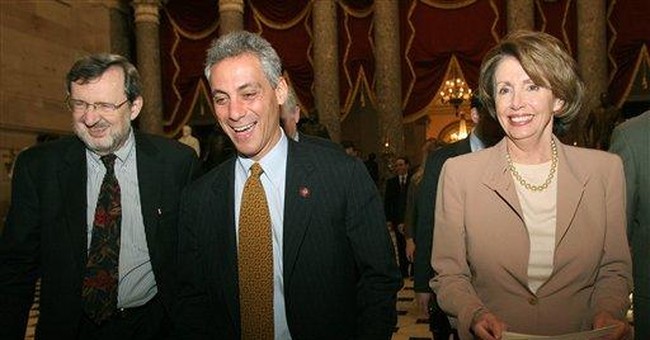 This week on the House floor Democrats in Congress will begin their efforts in earnest to hide pork-barrel projects from voters, budget watchdog groups, and Republicans who challenge wasteful spending. They’re gutting rules designed to help voters know where their tax dollars are going and creating massive slush funds for secret earmarks. And while they shut voters out of the budget process, they’re spending more with each passing day – an extra $105 billion so far this year alone. With the first four major appropriations bill on the House floor this week, Republicans are saying, “Enough is enough.”

Last fall, Democratic leaders repeatedly promised to lead Congress in a more “open” and “honest” fashion. Now they’re not only breaking those promises, they’re actively moving in the opposite direction.

It started in January when Democrats gutted Republican earmark reforms by allowing bills to be certified as “earmark-free” -- even if they contain earmarks. House Democrats exploited this loophole to pass a massive spending bill (“continuing resolution”) in February that contained hundreds of millions of dollars in hidden earmarks. The conveniently-flawed procedure was most famously abused by Rep. John Murtha (D-PA) who secured passage of an illegitimate taxpayer-funded earmark in bill meant to fund our intelligence activities. Murtha was caught by C-SPAN’s cameras threatening House Republicans who tried to object.

After that incident, Appropriations Committee Chairman David Obey (D-WI) announced he would simply bypass the rules entirely and “air-drop” pork-projects into legislation after it is too late for lawmakers to challenge them on the House floor. Each of the Democrats’ appropriations bills will include a multi-billion dollar slush fund to make room for these secret earmarks that are being hidden from public scrutiny.

Responding to overwhelming criticism of his plan, Obey has graciously said he will allow Members of Congress to “read the bills” and “write the committee” to inquire about earmarks. That’s nice and all, but as the Wisconsin State Journal – Obey’s home state newspaper – wrote: “With this maneuver, Obey would enhance his own power but prevent the public and most lawmakers from questioning earmarks until it is too late.”

This is reflective of a decades-old belief by Democrats that Washington politicians know how to spend our money better than we do. Democrats won’t even let us see where they’re spending tax dollars anymore – we’re just supposed to nod and smile, and understand that they know what’s best for us.

Well I don’t buy it.

Obey’s insider process will make it easier than ever for Members of Congress to protect the kind of secret spending they know wouldn’t survive public scrutiny. It makes a mockery of the Democrats’ pledge to make the appropriations process more open and transparent.

Couple this with Democrats’ rabid desire to raise taxes and you have real trouble for middle class families and small businesses. They’ve already approved tax hikes on American energy companies (which raises prices at the gas pump), a massive $392.5 billion tax hike on married couples and working families, and are poised to raise taxes again on small businesses and family farmers through the alternative minimum tax. I guess it makes sense to the majority – they have to get the money somewhere for all of their secret spending. It’s just a shame they choose to use taxpayers as their personal piggybank rather than find ways to cut spending elsewhere.

So how do we fix this?

Republicans are declaring war on secret earmarks and wasteful spending, and will fight at every opportunity to force the majority to restore the reforms we enacted last year – the first of their kind – that injected real transparency and real accountability into the budget process. These reforms required public disclosure of all earmarks and their sponsors contained in any bill, making the earmark process more open and transparent to taxpayers. They allowed lawmakers, for the first time ever, to challenge individual taxpayer-funded earmarks.

Americans expect and deserve that kind of transparency and accountability from Congress. Democrats flatly refuse to allow the House to actually debate or vote to remove wasteful earmarks. Republicans will use every tool at our disposal to force the majority to re-adopt our rules and keep their promises to voters.