Democrats' Iraq plan is Irresponsible on National Security and Spending 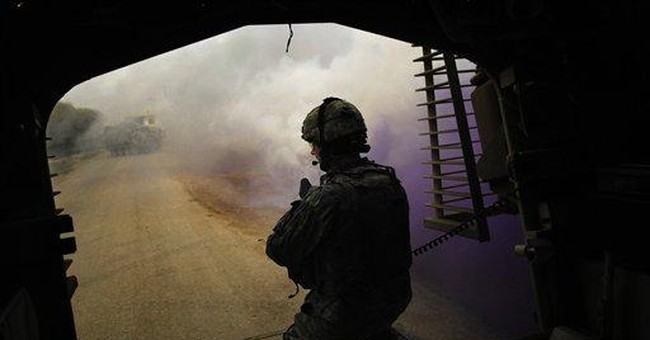 WASHINGTON - When was the last time you read a newspaper article urging Congress to micromanage the global war on terror? Never? Well, does anyone you know support denying our soldiers critical resources? Or has anyone suggested to you that American troops should be used as leverage for pork-barrel spending?

I didn't think so. But this is exactly what House Democrats are doing.

Back in February on NBC's "Meet the Press," I warned that Democrats' non-binding resolution was merely a first step towards mandating failure in Iraq. Now they're taking the next step. It's been called the "slow-bleed" strategy - an attempt to micromanage the war and choke off resources for American troops in harm's way.

Their plan consists of a series of constitutionally-suspect, politically-charged deadlines and conditions that purposely undermine our generals on the ground and telegraph a timeline for withdrawal to our enemy. As the vehicle for their dangerous scheme, Democrats are cynically using the emergency troop funding bill the House is expected to vote on today.

When President Bush first made his request for an emergency spending package, Republicans laid out two important principles: Congress should support our troops in combat without strings attached, and the emergency bill should not be used to fund pork-barrel projects and other unnecessary spending.

Unfortunately, the Democrats' proposal violates both principles. According to Rep. John Murtha, D-Pa., their measure ensures our troops "won't have the equipment" and "won't be able to do the work" necessary to defeat our enemies.

And Democratic leaders have actually boasted about saddling pork on the backs of our troops. They've loaded up more than $20 billion in unrelated spending that has nothing to do with winning the war on terror: $25 million for spinach growers, $50 million for a power plant, $5 million for tropical fish, and more.

Americans pledged to never forget the lessons of Sept. 11. That's why House Republicans are fully mobilized in opposition to Democrats' "slow-bleed" plan. There is still time to do what's right. Democratic leaders can heed legislation by Rep. Sam Johnson, R-Texas, a distinguished Vietnam veteran, calling for a clean troop funding bill that provides the support our troops need without the strings and without the pork.

Our troops themselves are appealing to Congress not to pull the rug out from under them. On AppealForCourage.org, American soldiers are asking Congress "to fully support our mission in Iraq and halt any calls for retreat."

Four years ago, Democrats and Republicans agreed that fighting in Iraq was a worthy cause. As current House Majority Leader Steny Hoyer, D-Md., said at the time: "The risk of inaction today in my opinion poses previously unfathomable dangers for tomorrow."

Today, Democrats are almost unanimous in their desire to abandon Iraq to al-Qaida, but the consequences of doing so are staggering. Our enemies understand the stakes - do Democrats?

Earlier this week, columnist Charles Krauthammer said there is "disgraceful stuff" in the Democrats' bill. "[I]t's pork and retreat. That's what this bill is, an amazing combination - irresponsible on national security, irresponsible on spending."

If victory over radical Islam is our goal, the Democrats' plan is a complete failure: It provides a road map for terrorists, while forcing American troops to carry Democrats' pork. It is a danger to both our troops engaged in combat and to the long-term security interests of American families.

Even if House Republicans lose the vote on this bill, we've already won the debate. Americans don't want Congress to micromanage the war or undermine our troops. We have fought - and will continue to fight - the "slow-bleed" strategy because it is the right thing to do.