We Can Balance Budget Without Raising Taxes 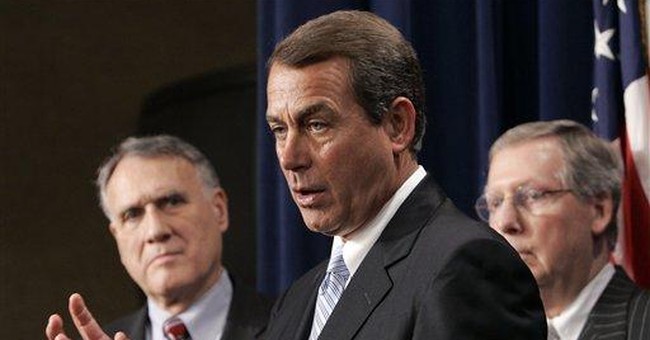 Over the last 12 years of a Republican majority in Congress, we provided tax relief every year. It is one of my proudest accomplishments as a member representing the 8th district of Ohio. But with Democrats in control for the first time in more than a decade, your tax burden - and our economic security - are at stake in the upcoming budget battle in Washington.

The U.S. economy has enjoyed an uninterrupted string of monthly employment gains since August 2003, creating nearly 8 million jobs in the process. One of the main reasons is the tax relief provided to working families in 2001 and 2003. Lowering personal income taxes, cutting dividend taxes, doubling the child tax credit, ending the marriage penalty, and easing the burden on small business have fueled five straight years of overall growth and have led to enormous capital investment.

We've helped keep the miracle of America's modern, sophisticated economy humming along through pro-growth, low-tax policies. And it's benefiting working families every day by allowing them to keep more of their paycheck, keeping interest rates low for home buyers, and putting us on the path to a balanced budget.

But for the first time in 12 years, Democrats are responsible for putting together a federal budget, and their strategy is far from secret: They plan to spend more and tax more. Incredibly, on the first day of the new congressional session House Democrats voted to make it easier to raise the family tax burden.

Where the GOP puts faith in individuals and markets, the majority party prefers tax increases, onerous mandates, and old-style Washington programs. They tend to measure "compassion" only by how much money can be thrown at a problem, rarely considering its effectiveness or whether it produces results for taxpayers.

It's important to keep this in mind as Congress heads into the new budget season. Our economy is strong now, but there are significant challenges on the horizon that pose a serious threat to the financial future of our children and grandchildren. Since 1965, the federal government's spending on "entitlement" programs outside normal annual review - chiefly Social Security, Medicare and Medicaid - increased 600 percent. By comparison, "discretionary" spending subject to yearly budget scrutiny increased 112 percent.

With the retirement of the baby boom generation, the entitlement system represents a looming tsunami that, if left unaddressed, will have devastating consequences on every American. By 2050, the federal budget will have no money for anything other than entitlement spending - no military, no homeland security, no highways, no environmental protection, no education and no court system. Our current course is unsustainable.

With that in mind, every American should ask several important questions. Will Democrats raise taxes in their proposed budget? Will they put forth a credible plan to reform entitlement programs for future generations? Will their policies jeopardize our strong economy and continued job creation? Republicans want to work with Democrats on the budget, but every family has the right to be concerned about the answers to those questions.

To encourage more economic growth as opposed to government growth, Republicans believe the budget can be balanced in five years, without raising taxes. Congress has a clear choice: use the increasing revenue from a thriving economy to balance the budget and address the long-term fiscal challenge of runaway entitlement spending that threatens our children's future. Or, blow it on pork, unnecessary and duplicative new programs, and bigger government.

In his book, "An Empire of Wealth," John Steel Gordon notes that while America is only 6 percent of the world population, we are 30 percent of the world's gross domestic product. The reason is our dynamic, innovative economy. "In virtually every field of economic endeavor, from mining, to telecommunications, and by almost every measure, from agricultural production per capita to annual number of books published to number of Nobel Prizes (more than 42 percent of them), the United States leads the world," he writes.

Congress' new budget season promises to show the American people there are two distinct visions on Capitol Hill. One says keep taxes low, restrain government and encourage greater freedom. The other vision says raise taxes and grow government. But I remain convinced Americans will ultimately reject that vision. What Americans want, and what Republicans are working toward, is to protect America's strong economy, keep taxes low and ensure that taxpayer dollars are spent wisely.