Strong Economy, Spending Restraint the Keys to a Balanced Budget 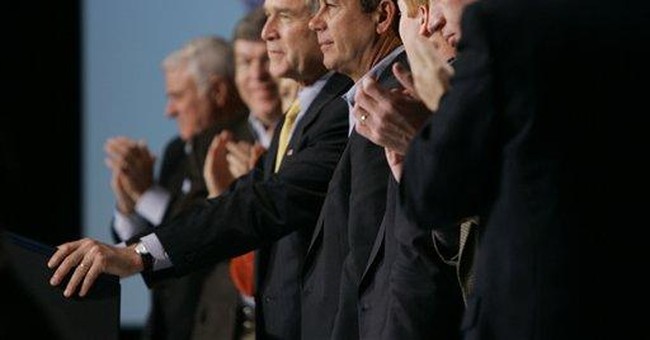 This week, President Bush will kick off a critical discussion about our country’s future when he unveils his budget proposal. His plan will balance the federal budget within five years – an important goal Republicans and Democrats can accomplish without raising taxes on working Americans.

The key to balancing the budget is keeping our economy strong and promoting fiscal responsibility. With our economy growing at a brisk 3.5 percent rate, job growth is steady and revenues to the federal government are through the roof. A recent report by the Congressional Budget Office (CBO) confirmed the tax cuts of 2003 have helped boost federal revenues by 68 percent. The Wall Street Journal recently reported that “U.S. exports are booming, as growth elsewhere accelerates. Exports rose 10% in the quarter and a very robust 9.2% for the year.” And according to a report released by the Department of Labor, the U.S. economy created an average of 187,000 new jobs each month last year.

Thanks to Republican pro-growth policies, local businesses are finding new markets for American goods and services, creating new jobs here at home. In fact, more Americans are working now than at any point in our nation’s history, and that’s good news for families, small businesses, and local communities across the country.

All of this news provides us with a unique and important opportunity – one we cannot afford to allow Washington politicians to squander. We have a choice: we can use the increased revenue that comes from economic growth to balance the budget, keep taxes low and begin to address the long-term fiscal challenge of runaway entitlement spending that threatens our children's future. Or we can blow it by squandering the money on pork, unnecessary new programs, and bigger government.

Pro-growth policies that create jobs and let Americans keep more of their own money, coupled with a real effort to put a lid on federal spending, will shrink the budget deficit and force the tax-and-spenders in Washington to do what every American has to do: live within their means. But many Democrats will argue in favor of tax hikes, most likely on businesses and others who help create new jobs and keep our economy moving.

We’ve already seen evidence of this: On their very first day in power, Democrats voted to make it easier to raise the family tax burden. And as part of their “100 hours” agenda, Democrats voted to impose tax hikes on American energy producers, increasing our dependence on foreign sources of energy.

We will need to fight attempts to raise taxes with everything we can muster. A tax hike on anybody is a hidden tax on everybody. When Congress raises taxes, those costs are passed on to consumers in one form or another and have devastating consequences for our entire economy. Raising taxes would only increase the family tax burden and make American products more expensive when compared to cheaper foreign goods. It won’t help balance the budget -- it will slow the economic growth that is creating the new jobs of tomorrow and increasing revenue to the federal government.

A strong economy keeps inflation in check and interest rates low, which has helped more Americans purchase their first home. More working families are benefiting from the fastest wage growth in more than five years, which makes everything from catching a movie on Friday night to paying your child’s college bill a little easier. And the surging stock market is increasing the value of Americans’ pensions and retirement savings plans each and every day.

But we shouldn’t stop there. Republicans want to do more to hold down working families’ cost of living by reducing America’s dependence on foreign energy and helping the 46 million Americans without health insurance. A stronger education system is essential to the long-term health of the American economy, and that’s why we should help make higher education more affordable and strengthen K-12 education by allowing low-income parents with children in underachieving public schools to send their children to private schools.

Fulfilling each of these important priorities will help strengthen our economy and balance the budget.

American families have an important stake in this debate about our country’s budget future, and its impact on our children and grandchildren. I hope Democrats will give the President’s proposal the due consideration it deserves. Even more important, I hope they will join us in taking the necessary steps to balance the budget without raising taxes. Keeping our economy strong and promoting fiscal responsibility will get the job done. Raising taxes won’t.