Make your mistakes while 'no one' is watching 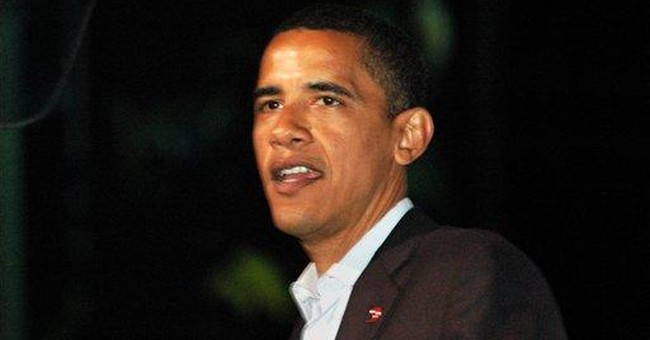 Barack Obama strolled across the Columbia Marriott Friday morning looking relaxed in a black sweat suit. Shaking hands with hotel workers and walking over to a group of reporters, the man roundly panned by political pundits last night looked as if he didn’t have a care in the world.

And why should he? Sen. Obama survived his first presidential debate, has over $30 million in the bank and still has the most exciting campaign in America.

Let’s face it, the guy wasn’t JFK or Bobby Thursday night. He wasn’t even Mario Cuomo. Instead, Barack Obama acted like a candidate who was a state senator the last time a presidential debate was conducted.

I started running for Congress the first time a year and a half before my election. The idea was to make my mistakes while nobody was watching. It worked. Unfortunately for Obama, his every move is dissected under a microscope and the stakes are so much higher than a little congressional race. Still, if Barack Obama was going to have an off night, better to do it on a warm spring evening in South Carolina than on a cold Iowa night eight months from now.

I suspect there will be very little impact from Thursday night’s lackluster performance. As I mentioned earlier, the candidates had so little time to respond that breakout moments would be few and far between.

Unfortunately for those who know and like him, John Edwards seemed to be somewhere else Thursday night. I kept hoping to see some of the rhetorical flourish Sen. Edwards wowed us with in 2004 but it never came. Only after the debate did I really think about the burden his wife’s illness must be putting on his shoulders. That being said, last night’s performance will do little to help his campaign.

Joe Biden, Chris Dodd and Bill Richardson are three of the most likable candidates. Biden did especially well. But short of buying the winning ticket in a Powerball jackpot, these guys can do little to survive next year’s front-loaded primary process.

Dennis Kucinich proved that he belonged on stage. While he may only be sitting at 2 percent, no candidate speaks for Democratic activists on the issues that matters most than Kucinich. He also provided Barack Obama’s finest moment, when Obama took the Cleveland congressman to task for ruling out military options on Iran. It wasn’t what he said that mattered as much as how he said it. For the first time, Obama seemed unscripted and on his toes.

And then, of course, there was the woman pundits declared the winner, Hillary Clinton.

At the debate we saw a woman who endured 12 tough years as the progressive wife of a Southern governor, eight brutal years as a powerful first lady and six years as United States Senator. She was the most experienced candidate by far and it showed.

You could tell this debate was not a great challenge for Hillary Clinton.

Going on “60 Minutes” to explain how your husband deserved to be president even though he seemed to delight in publicly humiliating you is a challenge. Standing by that same husband seven years later after being humiliating in the most horrific of ways is a challenge. Dealing with the Marc Rich scandal while trying to set up your office in the U.S. Senate is a challenge. But Hillary talking policy with seven less experienced politicians is nothing but a walk in the park.

So what was the net result of last week’s debate? Not much.

Hillary’s stock went up a bit and John Edwards’ dropped. But the most important development may be that all those Washington pundits comparing Barack Obama to Bobby Kennedy and Jesus Christ will lower their expectations and start judging Obama for who he is: an incredibly gifted writer and orator who arrived in the U.S. Senate two years ago.

The biggest beneficiary of those lowered expectations will be none other than Barack Obama himself.