Official Behind Open-Door-For-Saudis To Resign 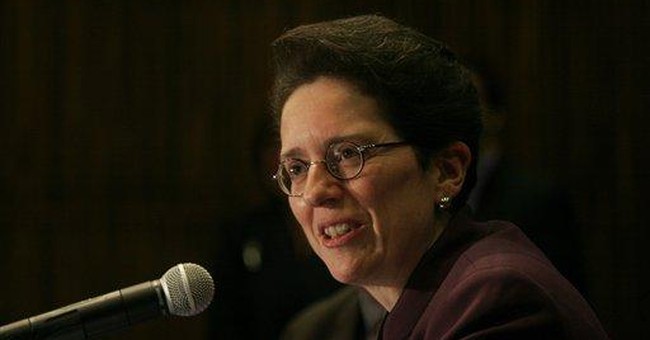 Defying the axiom that no bungling bureaucrat goes unrewarded, the woman ultimately responsible for the backlog of 2 million passports this year — and who then withheld the truth from Congress — was passed over for a major promotion, and consequently will resign her post early next year.

While the millions whose honeymoons, vacations and business plans were ruined will be pleased that someone has been held responsible, it is U.S. border security that could be the biggest beneficiary of consular chief Maura Harty stepping down.

As head of consular affairs at the State Department, Harty oversaw passports, administration of embassies and consulates, and, most important, visas. It was in visa policy where she continued the path blazed by her predecessor, Mary Ryan, who had made it easier than ever in countries around the world for foreigners to receive visas — often in contravention of the law.

Though visa policy receives little congressional scrutiny, it is a critical component of border security. All 19 of the September 11 terrorists came here on valid temporary visas — despite the fact that at least 15 of the terrorists did not qualify for one under the law.

The terrorists didn't acquire visas through skill or fraud; they simply took advantage of a system rigged to approve almost every Saudi national who wished to come to the United States — a practice that plainly violated the law.

Congress years ago required that all applicants be presumed ineligible until they prove their own eligibility — an intentionally high bar to clear. It was intended to discourage illegal immigration from people who overstay their visas by requiring that applicants show ties to their home country, meaning reasons to return home. But those qualifications also serve to screen out the people most likely to be terrorist operatives: young, single, unattached males.

This provision, however, was turned on its head by Ryan, then by Harty.

Despite being a controversial nominee, Harty was confirmed in 2002 after she pledged to the Senate that she would protect Americans from future terrorists by vigorously enforcing the laws relating to visas. She didn’t.

Rather than tighten visa procedures, Harty oversaw a relaxing of the rules in countries such as Egypt and Pakistan. Even in the country that produced 15 of the September 11 terrorists — Saudi Arabia — approval rates for visa applicants remained stunningly high.

Her "punishment" for refusing to enforce the law was a promotion. She was elevated this May, on a semi-acting basis, to under secretary for management — or just one level removed from the secretary of State. She probably would have gotten the permanent appointment, but she was still needed to tend to the passport crisis.

Well-regarded for her managerial acumen, Harty's clumsy handling of the passport mess was surprising. As reported by this columnist in June, Harty ignored the private consulting study that correctly predicted the surge of applications that would come with the new regulation requiring passports for all Western Hemisphere air travel. But once her lower estimates were proven wrong, Harty made matters worse by failing to act even after the backlog had ballooned over several months.

This would lead to Harty's downfall. While her efforts to systematically increase visa approval rates in countries with large populations of radical Islamists had gone largely unnoticed by Congress, the three-month wait for passports earlier this year became a top priority for every congressman and senator.

Feigning contrition at a congressional hearing, Harty nonetheless blamed private consulting firm BearingPoint for underestimating the number of applications to expect. But as reported by this columnist, it was her office that shifted the forecast downward by nearly 2 million, which is what caused the backlog.

Needless to say, misleading the same senators she would need to confirm her for any promotion was not a smart career move. This, along with conservative pressure exerted on the White House, slowed the permanent appointment to under secretary of management that had seemed imminent only months earlier. The White House eventually changed course, nominating Foreign Service Career Minister Patrick Kennedy. The Senate quickly confirmed him.

With Harty poised to retire by the end of February, the White House needs to avoid the mistake it made five years ago. Without conducting a meaningful search to fill one of the top border security positions in the entire U.S. government, the White House simply accepted the State Department's recommendation of Harty to replace the fired Mary Ryan.

Had President Bush's advisers conducted even a cursory review, they would have learned that Harty was a protégé and clone of Ryan, who almost certainly would not undo the very policies the September 11 terrorists exploited to enter the United States.

If the White House follows the same trajectory this time in naming a Harty loyalist to head consular affairs, then Saudi nationals trying to get into the U.S. can continue to expect the royal treatment. The only way to strengthen border security, in short, is to hire from outside, either a security-minded member of the Foreign Service or a genuine political appointee.

Let's hope the White House has learned its lesson and appoints someone whose top priority is to follow the law and keep us safe.