See No Muslims: The NY Times Ignores the Obvious 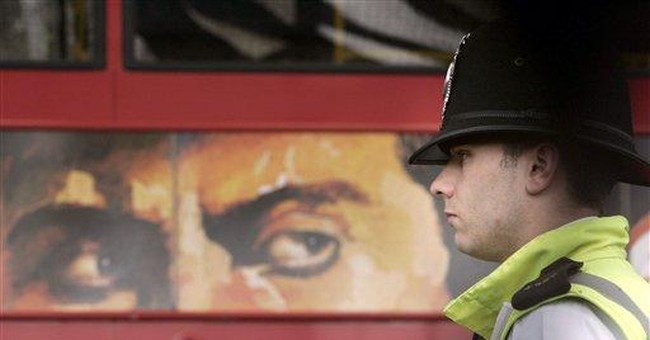 In what must have come as a shock to its readers, the New York Times reported that the July 7, 2005 terrorist attacks in London brought “home to Britain fears of homegrown terrorist attacks among its disenfranchised South Asian population.”

Imagine the surprise of many to learn that Britain is now under attack from “disenfranchised South Asian” people, not those who murder in the name of their Islamic faith.

Cruelly ironic is that in the course of attempting to avoid offending Muslims, the Times managed to defame two larger groups of people—all in a single sentence.

And that’s setting aside the fact that the deadliest 7/7 bomber was not even “South Asian.” Germaine Maurice Lindsay, who changed his name to Abdullah Shaheed Jamal after converting to Islam at age 15, moved to the UK from Jamaica.

A plain reading of the silly Times sentence would suggest that the British discussions of terrorism for the past two years have revolved, in large part, around fears of Indian Hindus, the single largest South Asian demographic in the United Kingdom. (According to the last UK census, immigrants who trace their ancestry to India, over 80% of whom are Hindu, are the only population of South Asian descendants topping one million in the country.)

Presumably, the Times was seeking a gentle way of pointing the finger at ethnic Pakistani Muslims, or perhaps even Muslims hailing from Bangladesh. But the self-proclaimed “paper of record” couldn’t bring itself to write anything more specific than “South Asian population.”

Perhaps the Times assumed that its sophisticated readers would read between the lines, just sort of figuring out that reporters Alan Cowell and Raymond Bonner were really talking about Muslims, but couldn’t write as much out of politeness.

In a 1,600 word story about homegrown terrorism inside the UK, it took roughly 1,400 words before Cowell and Bonner mentioned “Muslims.” “Islam” is nowhere to be found.

But the Times’s absurd rhetorical acrobatics insulted not only the broad “South Asian” population, but also Britain itself.

Notice the clever phrasing about the object of Brits’ fears: the “disenfranchised South Asian population.” Disenfranchised is a victims’ tag that mostly sullies the aggressors who have committed the disenfranchising, in this case implying that Britain has “deprived” this population group “of the rights of citizenship.”

Brits have done no such thing.

Remember that Muslims, er, “South Asians,” have long been welcomed into British society, from employment through politics. 7/7 bomber Mohammad Sidique Khan, for example, used to work for Britain’s Department of Trade and Industry.

To the extent that Muslims live and function outside of British society, it is largely by choice. British imams, for example, have told their followers not to contribute to the “infidel” economy and instead suck off its government by collecting welfare checks. And no one who’s seen the photos needs reminding of the outrageous British Muslim protests calling for the blood of Islam’s critics.

Perhaps the Times feels no remorse insulting large groups that the paper doesn’t consider to be minorities. And perhaps the Times finds no shame in ignoring the religion of people hellbent on murdering in the name of that religion.

But is the Times even slightly concerned when the paper’s sensibilities trump the facts?