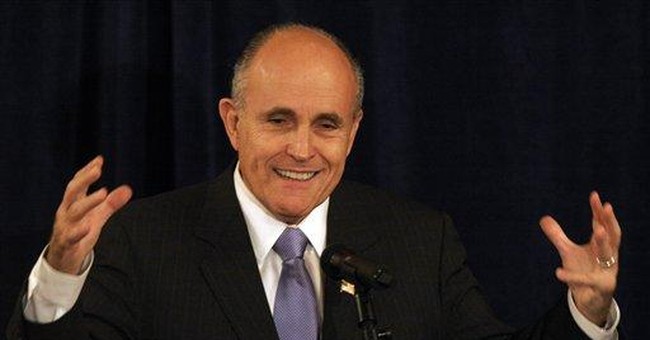 In the early nineties, New York City was said to be ungovernable, out of control, and crime ridden beyond reversal. Tourists no longer felt safe visiting the Big Apple, city residents were constantly looking over their shoulders, and leaders in government had let everyone down by not attacking the crime problem. In 1993, there were almost 2,000 murders, and each week more than 11,000 major crimes were committed.

When Rudy Giuliani became Mayor of New York City in 1994, he helped refocus the NYPD's efforts by launching a revolutionary program named CompStat that helped make New York City the safest large city in the United States. Mayor Giuliani and his Administration proposed attacking crime by not just arresting criminals, but also by making the NYPD accountable for crime levels in every precinct using performance-based measures.

CompStat employed four main crime-fighting principles: timely and accurate gathering of information; effective solutions for problems; efficient deployment of police personnel; and constant assessment and reassessment. CompStat was not just an analytical tool – it was a new way to think about crime.

Using computer-generated maps that helped police identify crime hotspots, CompStat provided near-instantaneous data in an easy to understand format. Instead of having to wait days, weeks or even months for the latest crime statistics, the NYPD could almost immediately recognize where crime was increasing or decreasing, so the appropriate levels of personnel and resources could be assigned to every neighborhood. By spotting trends in the data, the NYPD was able to go on the offense against crime and be proactive, instead of merely reactive.

While CompStat could accurately portray crime trends, it was up to the fine men and women of the NYPD to implement new policies and tactics to best use the data CompStat provided. In an effort to eliminate communication failures and duplicated responsibilities, Mayor Giuliani fought for the merger of the NYPD, Transit Police and the Housing police, which not only streamlined the police forces but made for a more professional force.

CompStat gathered information nearly immediately, thereby ensuring efficient and effective police deployment. CompStat is emblematic of the Rudy Giuliani approach to problems. First you need to recognize the problem, gather all of the information, and then find the most effective way to combat the problem. This approach forced the NYPD to think of new and creative ways to attack New York City's crime problem.

Having the latest crime statistics wouldn't have mattered one bit if those in charge were not being held accountable for acting on them. Using CompStat-generated statistics, the top brass in the NYPD held a weekly meeting with Commanders from the 76 NYPD precincts, 12 Transit Districts, and 9 Housing Bureau Service Areas to review the crime reports from their respective areas. If crime went up, the Commanders were grilled about why. If arrests were up on some days and significantly lower on other days, the commanders were asked why. Performance was rewarded and failure was penalized.

Between 1993, when Giuliani took office, to 2001 when he left, murders dropped by an astonishing 66%. Rape went down by 45%, robbery by decreased 67%, and aggravated assault, larceny, and motor vehicle theft each decreased by at least 39%. In recognition of its success, the CompStat program won the “Innovation in Government Award” from Harvard's John F. Kennedy School of Government and the Ford Foundation in 1996.

If imitation is the sincerest form of flattery, the CompStat program has been well praised. Philadelphia, Baltimore, Los Angeles, London and numerous other cities have adopted programs similar to CompStat to help them protect their citizens.