The New York Times called Joe Lhota "a calm voice for a combative Mayor." From 1998 until December 31, 2001, Lohta served as the chief operating officer of New York City and played a crucial role in the City's impressive and steadfast response to the tragic events of September 11, 2001.

At his desk in City Hall on the morning of the attacks, Lhota heard the explosions and immediately rushed to the World Trade Center to meet Mayor Rudolph Guliani, to assess the damage, and to help direct emergency efforts. As the Mayoral team arrived, a second plane was approaching the south tower. Taking refuge at 75 Barclay Street, an office building just north of the twin towers, they made their way below ground to safety and eventually to a command post to help speed assistance to the victims.

As the man responsible for overseeing all of the operating agencies of New York City, Joe Lhota was an indispensable member of the team that made New York a symbol of hope and American fortitude in the face of the first attack on the United States since Pearl Harbor. Working with the police and fire departments, the business community, medical professionals, federal officials, and ordinary citizens, Lhota and members of the Mayor's team established a model of emergency response.

Lhota also played a key role in responding to the real human needs of the New York tragedy. He provided comfort to the families of the victims and directed efforts to help them.

Prior to his appointment as Deputy Mayor by Mayor Giuliani, Lhota served as the City's Budget Director and, before that, Finance Commissioner. He was responsible for the successful development of the City's successive years of record-setting surpluses.

Lhota is a trustee of The City University of New York, received his undergraduate degree from Georgetown University, and his MBA from the Harvard Business School.

Giuliani is the proven fiscal conservative in the race
October 05, 2007
On Rudy's Pro-Growth Record
September 07, 2007 | 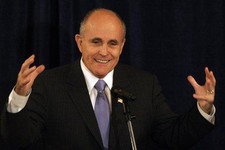