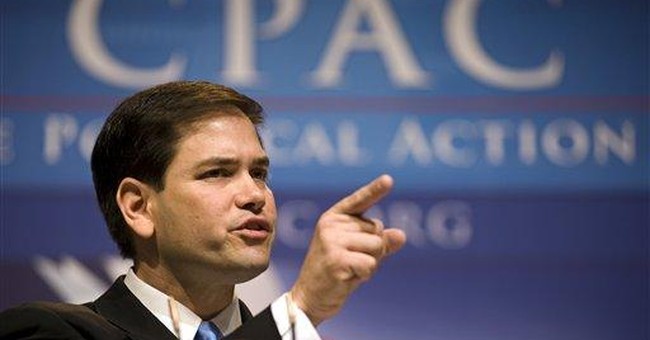 CPAC is filled with brilliant conservative speakers sure to knock your socks off with their wonky analysis and inspiring speeches. But let's be honest. What are we all really looking for at CPAC? The oddballs, the accidents, and the good times. For this, I bring you the top 10 best moments of the first day of CPAC.

10. The hole in the ceiling after an attendee accidentally rammed the pole holding his "Don't Tread On Me" sign into the ceiling panel.

8. The guy wearing a sandwich poster (two posters attached at one end with strings, which are worn on the neck of an unlucky activist) advertising telecom in the center of the ballroom all day long.

6. Scott Brown's surprise appearance: "Yes, I arrived in my truck."

5. Dick Cheney's surprise appearance: "A welcome like that is almost enough to make me want to run for office again," said Dick Cheney. "But I'm not gonna do it."

4. M&M's branded with the words "Energy Tomorrow," handed out every five minutes by the American Petroleum Institute. The energy gained from constantly munching them was most definitely used today.

3. Attendee watching Mitt Romney: "How on Earth did we end up with John McCain as a nominee after we had this guy? It makes me sick to my stomach."

2. Liz Cheney, relating a question from her nine-year-old daughter, Grace: “Mom, is President Obama really trying to bring terrorists into the United States?”