Things Looking Up for GOP in Virginia 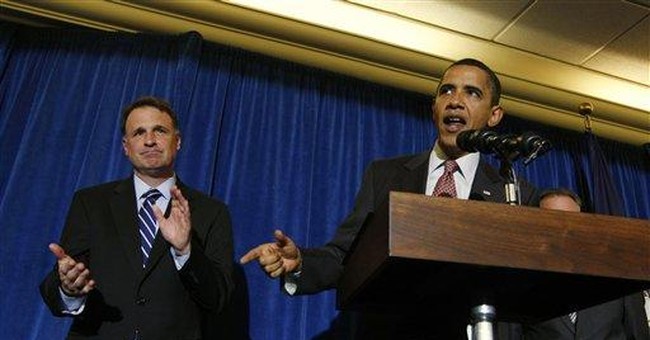 Observers view the matchup as a test-run for Congressional elections next year. As national political sentiments shift from blue to red, conservatives hope the VA Governor’s race will signal that those sentiments can be translated into cold, hard Congressional seats, breaking Democrat hegemony of all three branches of the federal government.

Virginia is particularly well suited to be put under the political microscope. It generally leans red, but the state elected President Obama along with a Democratic governor. McDonnell has led in the polls since day one, and he currently sits between 7 and 13 points ahead of his opponent.

Deeds is suffering from dwindling public sentiment towards Obama and widespread dissatisfaction of national Democratic policy proposals, and has had to distance himself from Congress and the administration to appeal to unhappy Virginians. Taxes, health care, and job creation are the top issues, with traffic congestion, Virginia schools and social issues also under the heat lamp.

McDonnell is known as a strong cultural conservative in a state that’s only partly on board with those values. To that end, the election was juiced up after the Washington Post dug up McDonnell’s 1989 college thesis on women’s rights, implying that it was sexist. Deeds launched a string of attacks over the thesis, which McDonnell has successfully deflected via dedicated fundraising and media outreach.

McDonnell has also successfully attacked Deeds on his tax record, catching him on camera first asserting and then denying that he would not raise taxes to alleviate Virginia’s congestion problem. Republicans have launched a series of hard hitting ads that publicized the comment; Deeds has chalked it up to “legislative-speak.”

A Democrat from southern Virginia – which is heavily Republican – Deeds was particularly well suited to take the state this cycle, but has suffered for focusing on those southern Republicans at the expense of northern Democrats. Those northern Democrats are precisely the ones who are unsettled with the current administration and Democratic Congress, and turn out to the polls in large numbers.

Deeds and McDonnell are meeting up for the second time in the Commonwealth. They both ran for Attorney General in 2005, where current Governor Tim Kaine was elected Governor. McDonnell won the Attorney General contest by about 300 votes.

This election will take place on November 3.