Students and Unions Swoon for Obama and Obamacare 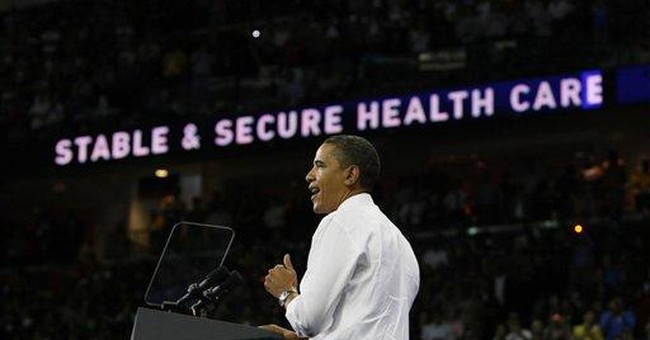 President Obama's rally at the University of Maryland on Thursday was a highly choreographed campaign event that drew in college students and union members by the thousands.

Instead of campaigning for an election, the President was campaigning for health care reform. Obama didn't quite fill the 18,000 seats in UMD's Comcast Center and appeared three hours later than the scheduled 9am start time.

It didn't seem to bother the crowd, which performed "waves" around the stadium with their hands to the music of UMD's school band, which played hits like "Sweet Caroline," "Thriller," and "Let's Get Ready To Rumble." It especially didn't seem to bother the members of the Maryland Bricklayers’ Union, one of several unions that bussed in workers for the event, giving them paid time off for a chance to rally for Obamacare and kick back with friends. Several workers said this wasn't the first Obama rally they've attended while on the clock.

An inadequate sound system drowned out most of Obama's introduction, given by a UMD student, though enough of the intro got through to make it clear the student was concerned about getting health insurance after having survived cancer.

The girl finished her introduction with a resilient "We need health care now," and then waited patiently near the podium in a black cocktail dress and heels while Obama strode up to the stage, appearing as though he was there to save her. After a loud standing ovation, Obama admonished the crowd: "You guys can sit down, by the way."

The President's speech was very similar to speeches he has given in the past, with slightly amped-up criticism towards detractors. He again said that while he's open to new ideas, he thought that all the alternative ideas that had been put forth were the "Same old same old," and that his detractors were playing "games." In a tone more violent than was used in previous addresses, Obama also said that he is going "to be the last" president who addresses the health care issue.

A handful of opponents protested the event on the lawn outside the stadium, wearing grim reaper costumes and holding signs that said "Hello free health care; goodbye, good old days," and "Page 29: health care will be rationed."

Michael Ross, a senior at UMD and the president of UMD Students Against National Healthcare, said that he "initially thought it was cool" that Obama was coming to speak, but then his attitude turned sour when he found out the University would be offering no alternative event for anti-Obamacare activists.

"I know UMD does not endorse this as our view, but subliminally, they do," said Ross.